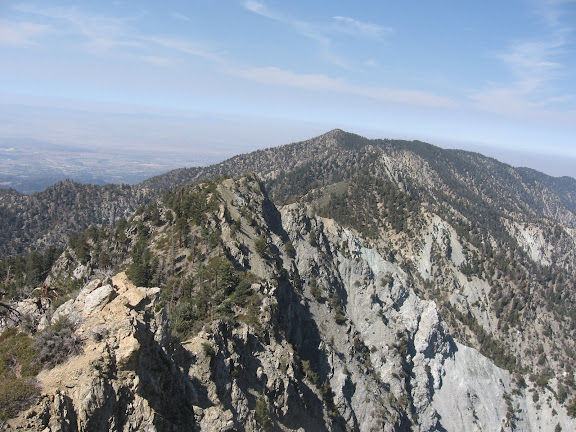 Well that's quite a ridge.


I had originally thought of doing a hike north of Baldy, but with the fires, I figured I should try to get further away from the bad air. Plus I had just gotten home Saturday night from a conference that locked me inside for most of the day, so I wasn't sure I was feeling like hiking 7000 ft.

Instead, I had been eyeing a hike along the Yucaipa Ridge in the San Bernardinos. I had wanted to hike the whole thing at some point, all the way from Galena to Allen. That would be quite a task and not the sort of death march I was feeling for this particular day.

Still I wanted to at least check out the little talked about part of the Yucaipa Ridge - Little San Gorgonio to Galena (what I call, YucaipaEast). Very few TR's exist online mentioning this traverse. When most mention hiking the Yucaipa ridge, they ignore this part. Why?

Well come to find out that Rick Kent considers it a 'pumped up version of the Iron/Baldy traverse'. Another noted that one misstep on this ridge and it may be your last. oh rly

This was not something I wanted to take a large group on, so luckily it was only Winston and I for this one. In case we felt like traversing most of the ridge, we dropped one car off down near the western end of Forest Falls, then parked up at Vivian.

We hiked up the creek toward Mill Creek Jumpoff, crossing/climbing boulder at an ever increasing grade. As others have detailed, the jumpoff can be quite the PITA to get up. It tricks you into thinking you should follow on the tan dirt on the left side while you should really go up on the gray stuff in the middle. Well, we did avoid the tan dirt; however, we likely were a bit too far to the right.

We climbed the gray loose rock, generally following a small gully. I veered off to the left of the gully to try to get some more traction, but this only led to even steeper terrain and unstable rock - not a good combination. At one point I had to stop to look for a good path, and all the rock dust I had created was whipped back into my face by the strong breeze ramping up the headwall. 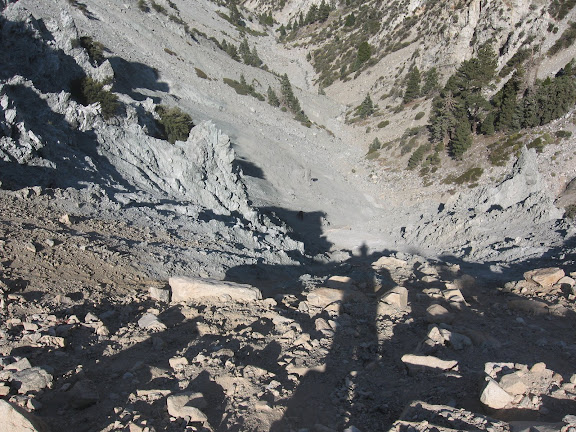 I wear contacts, so suddenly I had major agitation in my eyes and couldn't open them. This was certainly not the place to not have visual feedback. I kept blinking with my eyes just hoping that I wouldn't slip without any eyes! Luckily, I was able to get the eyes back to normal, and cross back over into the gully, and take it to the top of the wall.

Winston made it up soon after, and then we were on to Galena. We both were already a bit tired at this point, but I figured we would be doing the majority of the gain by the time we hit Galena. Well I was wrong.

We hit Galena with relative ease, following a use trail that at times hugs the steep dropoffs into Mill Creek. At this point we continued on, beginning the lovely stroll across YucaipaEast. After following a faint use trail for a short while, the ridge shows its character. The north side of the ridge starts having very abrupt drops. This is not something you'd like to fall down. And it is like this for most of this traverse.

Basically, at anytime you have a choice of either following on top of the ridge, or dropping down the south side some distance to traverse around the dangerous parts. Depending on the technical difficulty of the climb along the ridgetop and the brush below, your choices will vary. One bump had a very steep droppoff on its western end and we were not about to test it. So we had to drop down south a few hundred feet until we could safely cross and climb back up.

In another case, dropping down the south side really wasn't feasible, so we had to downclimb some rocks and traverse a long a narrow ledge between the two sides. All these moves, the concentration, and the spectacular views down into Mill Creek and across to the San Gorgonio Wilderness all took up lot of energy and time. The traverse seemed to go on forever, certainly long than I thought it would.

Finally, we made it to Little San Gorgonio at 2pm, a bit over 6 hrs after our start. We had enough, and did not think of continuing on the standard Yucaipa Ridge traverse, even though it was certainly far tamer and not much gain left.

So now it was only the descent. I honestly had not payed much attention to this route down but I did have the GPS tracks. Of course being me, instead of dropping down to the saddle east of Lil San G like I was supposed to, I decided to try to make a shortcut and drop down directly from the summit. 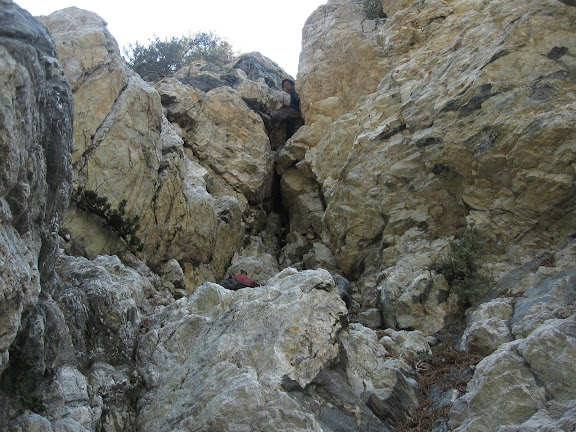 This did work for a while, until we ended up in a rock-filled gully. We descended down this for a bit (as I was aiming to connect up with the GPS track), but got to a point of a 10-15 ft downclimb. I guess we could have found a way around it, but instead we spent some time climbing down it. It was a bit tough and dangerous, but fun.

We then met up with the track and tried to descend following the track, but I apparently put us in a gully again instead of staying on the ridge. This was not really a problem but it slowed us down (and more pounding). Eventually we got back on the lower ridge, but then ran into a thickening forest with plenty of poison oak to go around. At that point we found the wash just west of the ridge, and were able to take that back to Vivian Creek.

In the end, this hike somehow managed to get 6000 ft gain in less than 10 miles. That alone should tell you it was brutal. I am glad we did it, but I don't think I'll be taking a larger group of people up there. The views were tremendous and it was really fun, but certainly also a good amount of risk involved.

I imagine that adding the regular Yucaipa Ridge traverse to what you did would a Rick Kent type of ordeal.

well you would know better than I since you've done that part :)

I actually think the worse would have been over. heading from LSG to Allen and down would be long but not too much more gain (and better terrain). But yeah doing the whole thing would probably be a 12 hr ordeal