Goat Mountain or Goat Peak is the unofficial name for the highpoint along the Goat Ridge beside Yamnuska and about 15 km East of Canmore. It is not to be confused with Old Goat Mountain which is 15 km South of Canmore and beside the Spray Lakes or any of the other dozens of Goat Mountains across British Columbia or the Western USA. Goat Mountain appears to be as overused as Mosquito Lake!
This Goat Mountain is noteable because of the Goat Ridge Traverse which is an old easy rock route which follows the Goat ridge. The twisty limestone ridge starts just West of Yamnuska and includes about 9 high points with Goat Mountain being the highest point. The ridge is on the edge of the front range of the Rockies and fairly low in elevation so it receives less snow and more wind than most areas.

The Goat Traverse is a Class 3 to 5.3 scramble/climb which can be done either way and is about 9.5 km and 1100m. Expect 6 to 12 hours depending on experience level and urgency. The harder spots have easy protection so little gear is required. Slings will be needed for rap off boulder if going N-S but if going S-N, there are rap rings on the North side slabs on Peak 3 and on Peak 1(climbers right).  The ridge only has one bail off spot(hard to find) so it is commiting and it has lots of exposure. The traverse is often done as an early season training climb because of the lack of snow.  The Peak 6(unamed) bypass trail can be scary if wet or snowy and it is in the shade on the North-East side of the peak.

The North access uses the Yamnuska park lot which is about 16 km East of Canmore on the 1A highway. If coming on Highway 1 (Transcanada) turn North at the Seebee overpass and travel 1-2km to the 1A. Turn right for 1 km and then turn left(west) onto the gravel road into the Yam park lot.

which will put you out on Highway 1A right opposite the cement plant. There is a little unofficial parking spot in the ditch along the powerline right at the end of the ridge. Leave a second car here in the morning.

Approach - Take the hiking trail from the West end of the Yam park lot and follow it up to the signed junction. Take the climbers trail to the left and head west. Ignore the next climbers up trail and follow the trail to the base of the big scree slopes. Cross to the trees where there is a cairn and flagging to mark the start of an up trail which comes out near the base of the West end of Yam near the start of Kings, Unnamed, Windy Sabs, etc. Take the trail to the col west of Yamnuska and turn left and follow ridge to base of North end of Goat Ridge. Follow trail across to the right to base of rock and a gully which runs on the right side of the face.

The north east face of Goat ridge from near the Goat-Yam col - the ascent gully is marked on the right side. 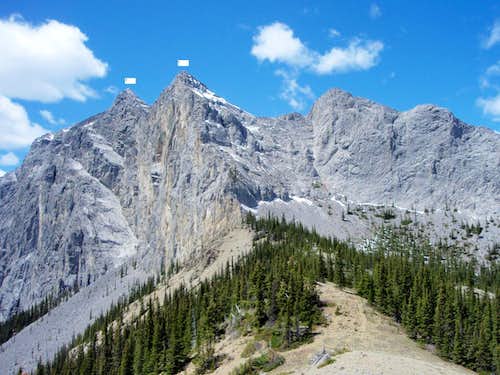 The north part of the traverse from Mount Wendell. 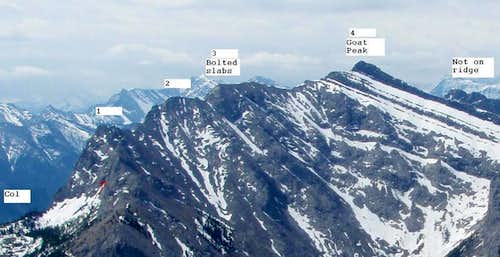 Scramble or climb the gully(5.3)on the right side of the NE face of the Goat ridge and then angle up and left on the face to your choice of several crack systems/corners that lead to the ridge.
The gully 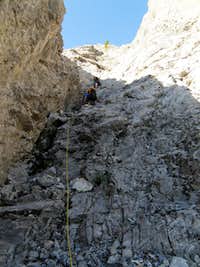 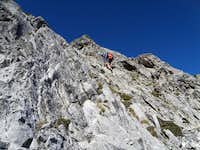 Note there are rap rings at the top of the face on the right on slabs to rap off if you are going the other way. (South - North Traverse)

Follow the ridge up and over various peaks. Some exposed knife edge sections but all Class 3/4 scrambling until peak 3 which has some bolted slabs. There is one 5.3 move up a small crack in the slabs if follow bolted line. Note there are rap rings at the top of the slabs for those going S-N. 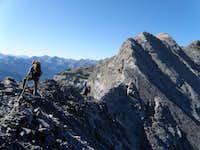 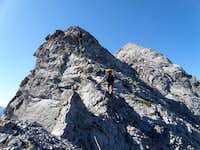 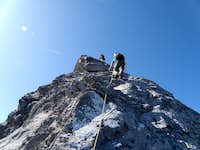 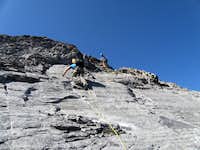 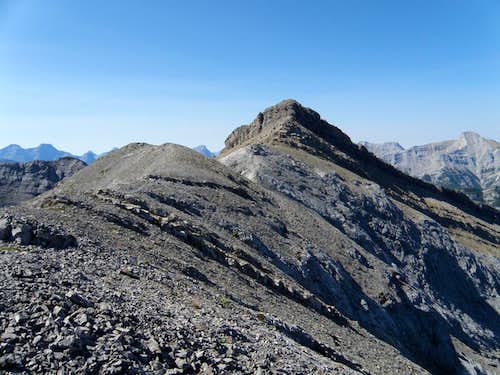 The Middle section of the Traverse 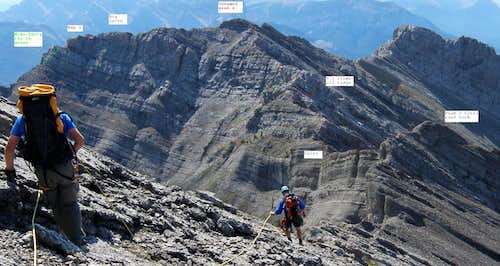 Climbing in the Middle section
Exposed sections of knife edge and scrambling to peak 5 which is coral reef rock and then an exposed ledge leads down off the peak. Lots of big solution holds for hands but loose gravel on ledge for the feet.(see left pic) 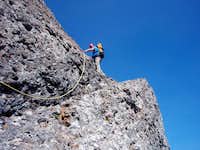 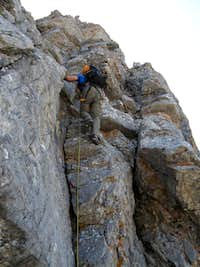 Note the Orange dashed lines(on two annotated pics) show a goat trail on ledges far below the ridge. This trail which has a cairn at low point between peak 5 and 6, can be used to bypass peak 6 (Unnamed) and miss all of the rapells if going N-S or miss any difficult climbing around the rapells if going S-N.
This trail might be wet or icy early in season. 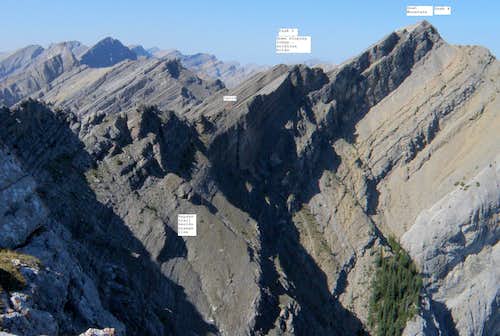 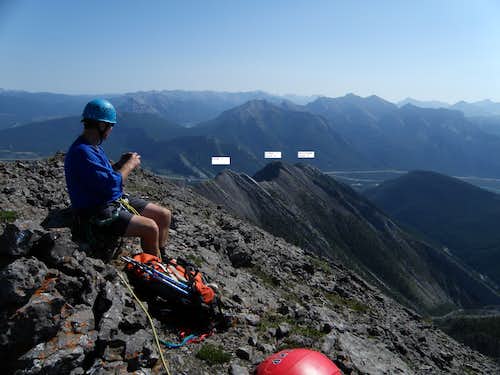 Side view of SE ridge which shows some of the the rapell and climbing options.

Rapell - this was overhanging- rapell off slings on large rock. 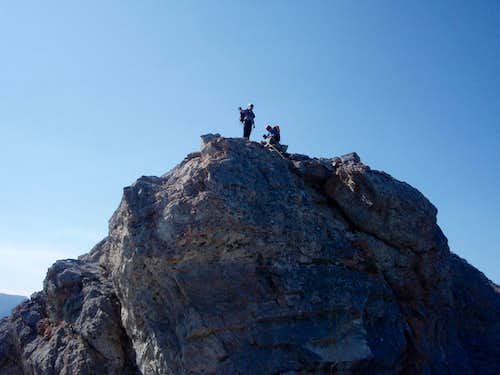 Several options to rapell off left side to trail or downclimb/rapell along ridge. We chose to do stick to ridge for full scrambling value and did 4 rapells. 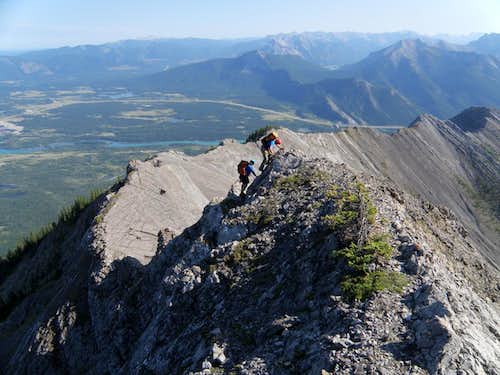 Looking back at SE ridge of unnamed from Loder peak. Shows how the rock layers cause rapell situations along the ridge. 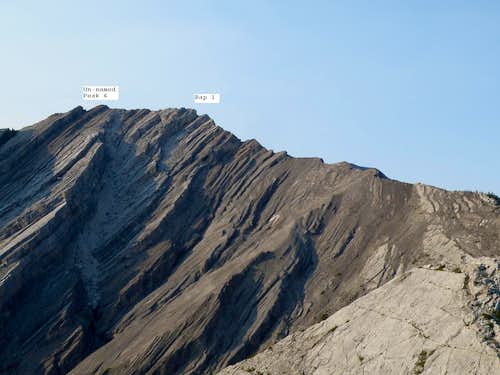 Unamed and peak 7 from Loder. Yamnuska behind - off to right. 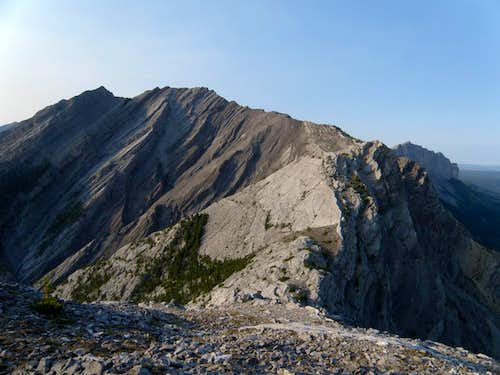 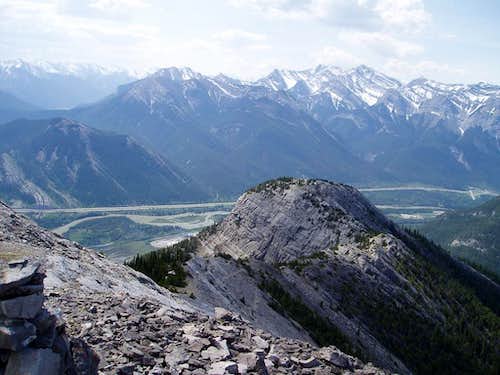 Looking back at slabs on Door Jamb from Highway 1A. 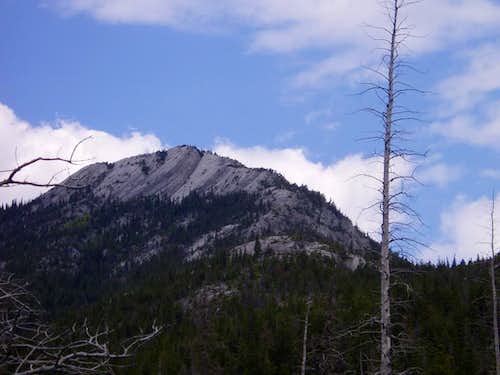 We used a 30 m rope, slings and took only a few smaller cams.
The harder sections are bolted or have easy natural protection with horns to sling or cracks for .75 to 1.5 inch cams.