I did not go to Guatemala primarily for hiking, but I did hike a few places while there visiting family.  I stuck out like a sore thumb, the obvious Gringo in the crowd, especially since I had hiking clothes that were not normal for the area.

One small hike (about 5 miles) I made was through a rain forest area with tons of vegetation in a national park on the way to Coban.  Not much real gain, but the weather is far different than California, where I normally hike.  (A picture is in the gallery below).

In our visit to Coban, we went to two different caves.  In one of them, there was a point where you needed to cross an underground river.  Here is a picture looking back at this passage: 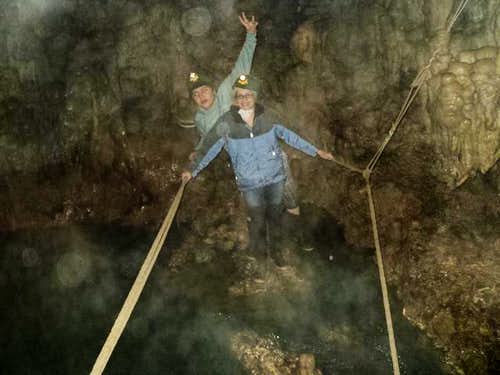 This is one of two relatively famous caves in and around Coban, Guatemala. This picture shows where the trail in the cave crosses the underground stream. My wife and nephew are crossing in the picture.

Coban is famous for its river where it comes down in a series of very colorful steps with small falls.  This is the picture you usually see for Coban, and you access this area by a short hike.  The water is nice, and fun to go in.  If you hike a short distance up from this area, you run into a narrow area that throttles the water very fast into the delta like areas below; this is not an area for swimming,
and people who have fallen in here die.  Here is a picture of the area where you can go swimming: 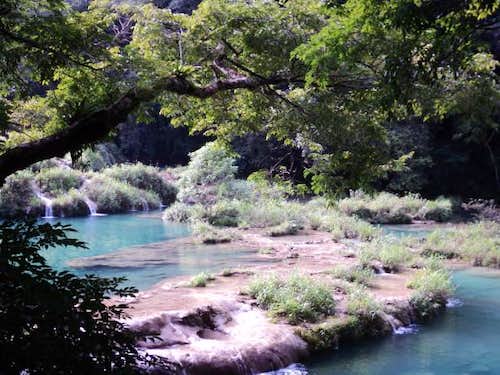 You can also take a short (a couple of miles or so) extra loop that allows you to go high and reach the following vantage point where you look down and get a good view of the river area: 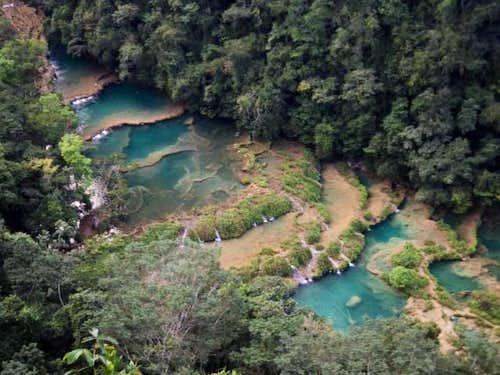 This is the type of picture you often see for Coban, Guatemala. You access this point by a short hike along a clear trail. This picture is a zoom from an observation platform on an upper trail hike.

Another area of interest in Guatemala is the Tikal National Park which is a UNESCO World Heritage Site with Mayan ruins.  The park is fantastic, and a very pleasant walking experience.  There are a number of ruins in the park, and some only come into view as you approach them through a jungle, which makes it very special indeed.  Tikal Temple V is the second tallest temple, but it is well
known because the access to its observation post is not up steps, but a series of ladders.  The climb up the ladders is not for a person with fear of heights, but not terribly difficult.  Each ladder ends in a short platform, of which there are many.  By the time you get to the top, you get a wonderful view: 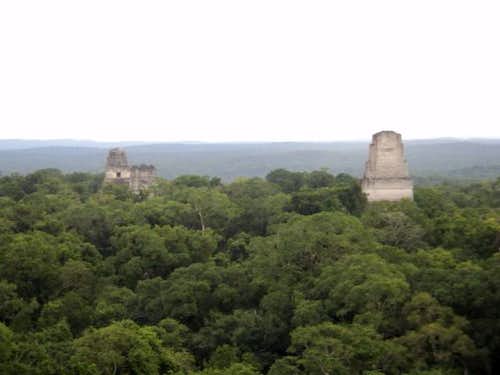 Shot from the platform accessed by ladders on Temple V 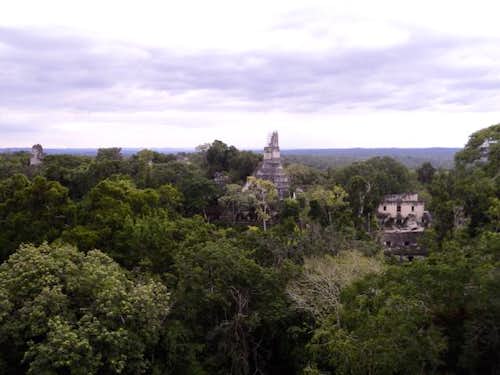 Shot from the observation area of Temple V accessed by ladders

There is plenty to see in Tikal National Park, and you should plan on a full day to really roam around and enjoy it.  You don’t want to be rushed. 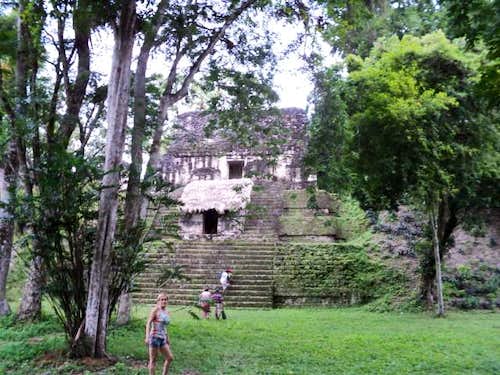 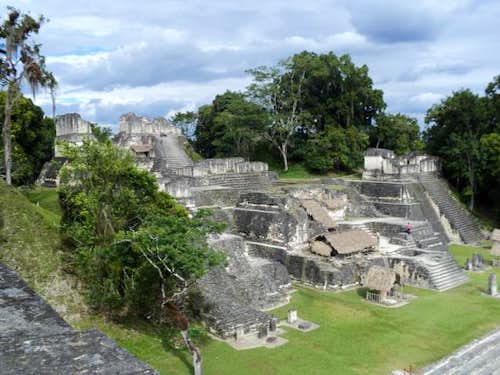 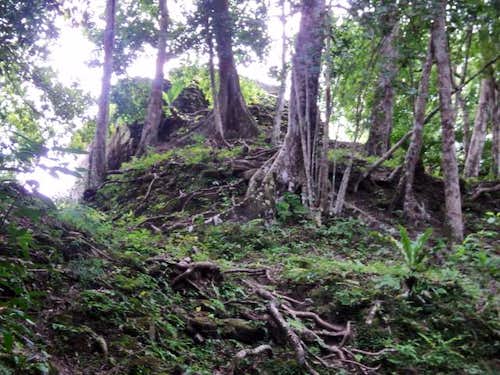 Notice how the ruins in this picture are mostly overgrown with jungle. There are many sites in this park like this where the smaller places are still overgrown by jungle. It is kind of neat to be hiking through jungle trails and then come across places like this.

Another area I went hiking in Guatemala was an active volcano, Pacaya, an easy drive outside of Guatemala City.  We hiked up a road (with a local guide and hiking sticks obtained from the parking lot) and then along a trail over volcanic ash and rocks and then we got to the following point where we had a group picture: 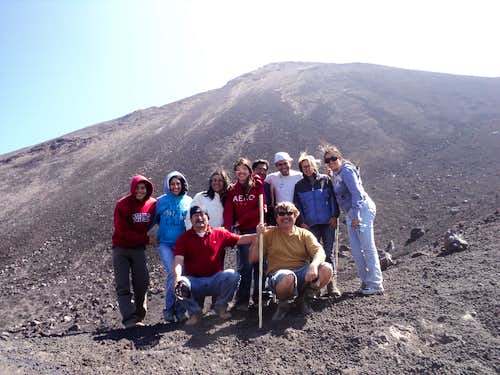 It is not advisable to go any further than the point in the last picture.  We were told that several weeks before our trip a different party went further up the volcano and was killed by lava flow because they could not retreat fast enough.  Here is a close up of the volcano from this point: 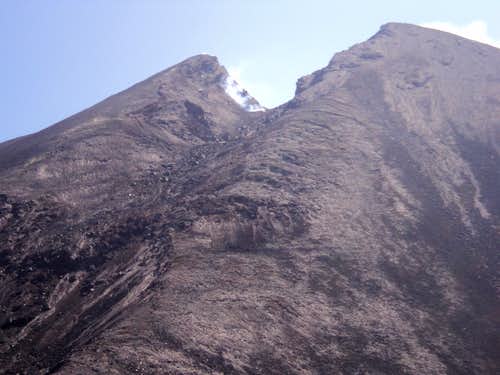 Another area I visited in Guatemala was Lake Atitlan.  We did not have much time here, but did take a boating tour.  There are groups that offer more extended kayaking and such along this lake, and that would probably be worthwhile if you have the time. 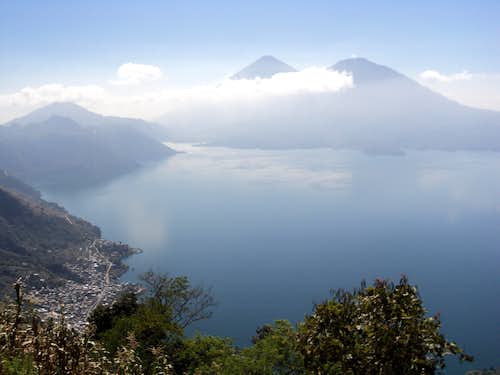 San Lucas is visible at the left of this picture. The picture is shot from a wonderful roadside viewpoint on the road that eventually takes you down to San Lucas. 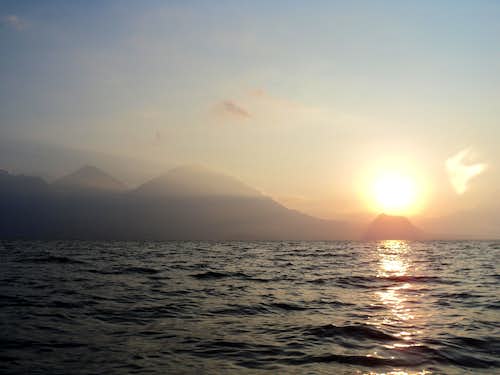 Shot from a boat on the lake

Comments on Getting About

Traveling in the country in Guatemala offers some challenges.  For example, in the country you have minimal roads that can have problems, like the following picture demonstrates: 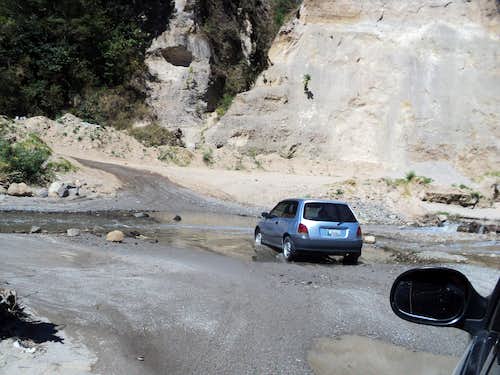 Traveling the roads outside the major cities in Guatemala can lead to some interesting situations like this road washed out in a storm. The road was on the way to what I would consider a major tourist destination, but in a rural area.

Also, you have to realize that outside of the major cities life can move at a much different pace with fewer amenities.  Here is an example, where villagers are gathering for laundry in a village on the way from Guatemala City to Lake Atitlan: 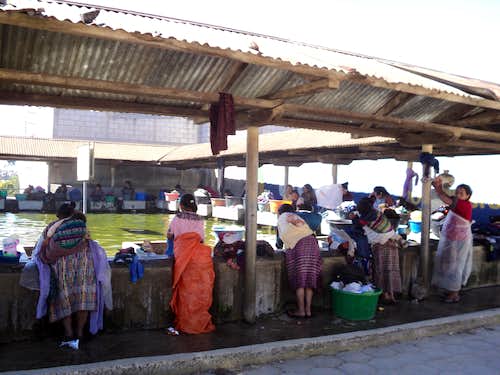 Guatemala is a very beautiful country with lots of natural sites to see.  You can visit the Atlantic Ocean (which I did when we went to Livingston), the Pacific Ocean and enjoy inland lakes and rivers.  There are quite a few volcanoes that can be hiked.  I really only hit some of the highlights.  One thing to remember is that there are many places where only Spanish is spoken.  I was with family who knew the area and did the driving; it would be much more difficult to visit and see without such  assistance.  However, with such assistance, I thoroughly enjoyed my trip to Guatemala in December of 2010.