Half Dome and Glacier Point 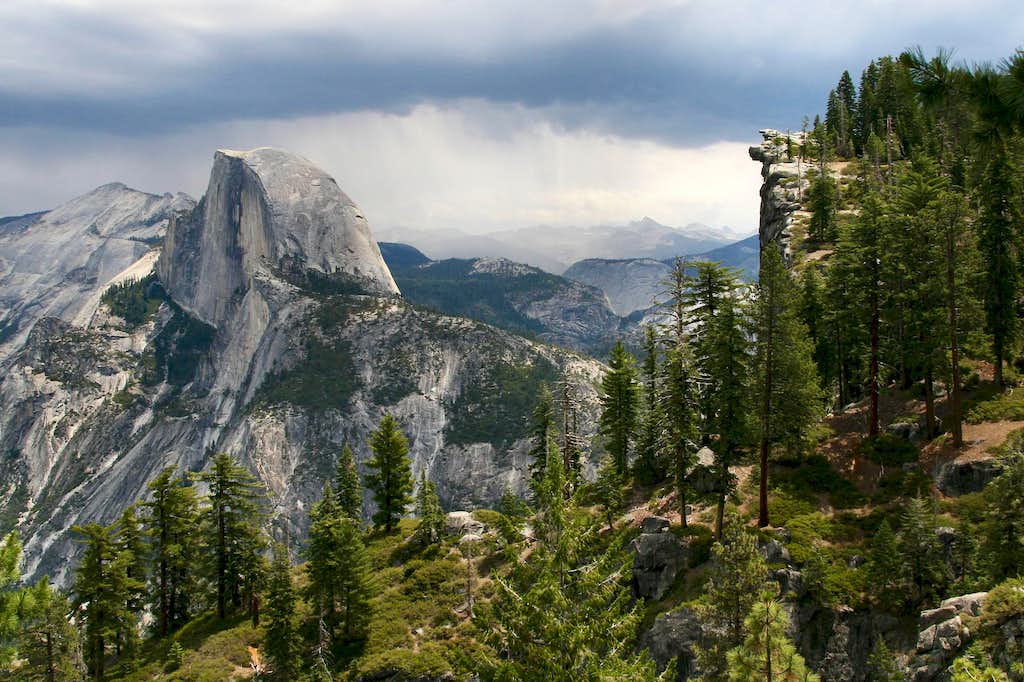 Groan: Not another Half Dome image! And yet, here it is, as if the previous 400+ images on SP aren't enough. But, as I was framing up this image, after ascending 3,000 feet along Four Mile Trail to Glacier Point, I just knew that I'd seen this very scene before as a black and white (probably in an Ansel Adams' image). I've searched without success to find his previous image. However, Mjrangel did point out a similar William Henry Jackson photochrom image. All I can offer in defense of my posting this image is that I think it came out pretty good. The rapidly changing light made it difficult to select the specific image to upload from the half dozen I shot. The storm over Half Dome/Cloud's Rest would reach Glacier Point just as my son (Curtis) and I were beginning our descent. While we would see about thirty or so hikers going up the trail that morning, only the two of us (and a small group of trail workers about halfway up) would make the descent in the rain and thunder (presumably the rest took the bus from Glacier Point back down). It was a wonderful hike, and I have many memorable images to share of it. But, this is the best (since, this year, lower than normal snowfall meant no water was falling from Yosemite Falls for my picture-taking labor!). Imaged in Jul 2007.

Thanks for looking and for the comment, Alex. I'll have more with a trip report in the near future. :-)

It´s a good shot and I like it!
Thanks
Charles

Nothing more than one of the top five shots of SP!
Greta great great composition.

not just another half dome...

... that's for sure!
Perfect composition.
Thank You
Stefano

Re: not just another half dome...

Thanks, Stefano--especially appreciated from someone with such outstanding work himself! --mark d.

Thanks for posting this shot Mark - it's really fantastic!
Howie

Thanks, Howie! It felt pretty "fantastic" even as I was shooting it. --mark d.

What a great composition. This has picture of the week quality.

Thanks, Dean, I did have my hopes up when I originally posted it. But it somehow got buried by a barrage of other really high quality images submitted at the same time. That's how it works out sometimes! :-)

Thanks, Tanya. As I allude on the GP page, it was "take-your-breath-away" beautiful. Thanks for visiting and commenting! --mark d.

The dark clouds really set everything off nicely...this is a great picture and it looks like an awesome hike!

Thanks for the nice comment, Bblack99. Interestingly, the dark clouds were a bit of a surprise during the hike up. If you've checked out the GP page, the images on it were taken during the same hike. Note how clear the sky was. It wasn't until near the end of the hike when you can actually see towards Half Dome that we saw those dark clouds gathering. Clouds were also gathering overhead, causing the entire frame to be shadowed and far less interesting. But, I waited for two holes in the clouds to light up both Half Dome and the foreground (including GP), thus making those clouds appear more naturally dark. GP's a great destination--take the hike if you ever get a chance. --mark d.

You've topped almost every other image I've seen of Half Dome!

Don't apologize for another Half Dome image! It never gets old looking at them and this one is spectacular. Well done.

Thanks for commenting, Shanrickv, and for the positive reinforcement! :-) --mark d.