If Disney Made a National Park

My son, Curtis, and I were on the second week of our three-week camping vacation. I say “camping” even though we’d just spent the past several days in Chula Vista at my parent’s home. However, that would be the only stay outside of a tent – the rest of the trip we would be tent camping (and in our brand new MSR Hubba Hubba, which I’d picked up after being fascinated by its great construction and light weight at the REI near my folk’s home!). But, I digress. We drove to just outside of Yosemite National Park (and, for those unfamiliar with our quest, we are working our way through visits to all of the U.S. national parks). We decided that rather than camp in Yosemite itself, that we’d stay at the KOA in Mariposa, both because showers were convenient (why can’t national parks have convenient showers?), and because they had a Wi-Fi connection. There I go, off the path again! Anyway, this was my second visit to Yosemite (my last being in the early-60s), and Curtis’ first. A lot had changed in the park since the early-60s – one being that they no longer do the firefall from Glacier Point (I had been able to see that from both the bottom and top). Another being that Yosemite is a lot more crowded now than back then (and it seems much more pressing with those crowds than any of the many other national parks that we’ve visited). Curtis would give me the best description I’ve ever heard for Yosemite (and it perfectly explains why we weren’t really enjoying the visit as we should have): “Dad, it’s like Disney was asked to create a national park.” So true. So very true. And so very sad.

Anyway, Curtis and I needed to get away from the crowds. We don’t do reservations (that’s too much like a job, not a vacation), so securing a backcountry permit was out of the question. We decided to do a day hike. Curtis wanted to hike to Half Dome, but I was concerned that might be pressing a bit past my own abilities for a day hike. We compromised on hiking Four Mile Trail to the top of Glacier Point from the Yosemite Valley floor, then back down. This is a 3220-foot ascent. The trail is a typical national park class-1 hike: Well-maintained and not too steep. It’s about 4.6-miles long. So why is it called “Four Mile Trail”? Because at one time it was four miles long, but the National Park Service decided to lengthen the trail and make it a little less steep.

We arrived at the trailhead about 8:30 a.m. The only other vehicle there was a park service truck dropping off some folks who (we’d later learn) were maintaining the trail. We headed out before they were ready to depart. As we began the ascent the photographer in me was studying the surrounding valley and the lighting situation. It was mostly clear, with a few clouds to add interest to the sky. We were on the shady side of the valley, meaning that afternoon we'd have to deal with direct heat from the sun.

Easily visible were three of the most well known sights in Yosemite: Sentinel Rock, Cathedral Spires and El Capitan. Conspicuously absent were two other well-known sights: Half Dome and Glacier Point itself. These wouldn’t come into view until well up the ascent. Also conspicuously missing, though we were in a great position to see it, was Yosemite Falls. Because of snowfall the past winter that was only forty percent of normal, it was little more than a wet, black stain on the rock.

We continued the ascent and the trail workers caught up to and passed us. One, a gentleman about my age, wasn’t wearing a shirt and was going like greased lightning. A few minutes later I talked to one of the younger workers and he said that man had been working for years in Yosemite, and no one was ever able to keep up with his pace. He also mentioned that when we arrived at their work location we’d be halfway up the mountain. By this time we were about one and one-half hours into the hike.


As usual for Curtis and me, he would scurry ahead (being a much faster hiker than me), and I’d eventually catch up (having taken advantage of every opportunity to catch my breath, which I call photo ops!). There were a few other hikers on the trail, probably two-dozen or so during the first two hours of the ascent. They’d pass me and then later I’d pass them. We’d exchange a few pleasantries. Though it wasn’t solitude, it was pleasant being able to share the incredible scenery with other hikers. About three hours into the hike I told Curtis that there were plenty of folks on the trail in case either of us got into trouble: Go ahead and strike out for the top and I’d meet him up there.

It was about then that we also started seeing folks coming back down the trail. Most of these people had either driven to the top, or taken the tourist bus. I was surprised (I guess I shouldn’t have been) by their lack of preparedness. Most weren’t carrying any extra gear (rain gear, anyone?), and most considered a single 12-oz bottle of water sufficient for the hike.

I continued my progress up to the top. The trail swung over and around Moran Point and Union Point, finally and dramatically bringing Half Dome into view. I took quite a few pictures of this famous mountain of rock, and then continued my journey. Finally, about 15-minutes from the top, Glacier Point came into view. It was incredibly dramatic. At that moment I knew I’d seen that very scene in a photograph; probably some work by Ansel Adams. The lighting was absolutely amazing … and changing very rapidly. I noted that there were storm clouds brewing on the other side of the valley over Half Dome. Nothing immediately threatening, but definitely a factor for our return. I got out the camera and set up the tripod and took several pictures of the same scene, no two alike (because of the rapidly changing light). After about 15-minutes, I packed the gear away and headed for the top. 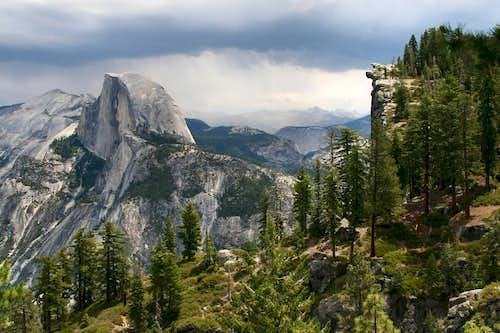 I found Curtis immediately at the top. I knew that there was a road to the top, but I was totally unprepared for how many people would be there. There were hundreds. We wandered around for a few minutes, but all of this humanity further reinforced the Disney-esque reality that is now Yosemite. I arranged the camera to take the requisite summit shot avoiding the press of humanity (there were folks on all sides of the camera and us, including immediately behind, but below the rocks).

It was while I was arranging this shot that someone looking through a telescope commented that there were folks on top of Half Dome. We could hear the distant rumble of thunder as a lightning bolt struck Half Dome. Curtis and I discussed our return, and decided to inquire about the tourist bus. The lady at the Glacier Point gift shop told us that the next bus wasn’t for two hours, and that she couldn’t guarantee there’d be seats available on it. So, we ate a quick bite, donned our rain gear, and then struck out for the valley floor via the same trail we’d hiked up (back to our original plan).

For the first ten minutes or so we passed many of the folks who’d ridden to the top with plans to hike to the bottom. Not having rain gear, they’d decided perhaps today wasn’t their day to hike down. But, after that initial surge of retreat, there was nobody on the trail. All the other hikers from the bottom that we’d seen that day had apparently decided that waiting for the bus sounded like a good option. As we continued our rapid descent (park service says 3-4 hours), it also became obvious that the light drizzle was both keeping the weather cool, and keeping the bugs away. So, this storm, which was now ensconced overhead, was a blessing in disguise. We’d hear an occasional rumble of thunder, but we felt quite safe because we were now well down the side of the mountain, and amongst reasonably forested areas (vice being exposed on Glacier Point awaiting a tourist bus!). It took us about 45 minutes to reach the trail workers, who were still continuing their task. And, after about another 45 minutes we reached the bottom of the trail and the storm had mostly dissipated. We checked out watches: 3:45 p.m. The bus from Glacier Point departed at 3:30 p.m. And it’s supposed to take about 40 minutes for the trip back down. And that would have left us needing to use the Yosemite shuttle service to work our way back to the Jeep. Yeah, hiking back down was the smart thing to do.

After that we decided to cut our expected stay in Yosemite short by one day. Both of us were somewhat disappointed by the crowded conditions, so the next morning we packed the Jeep and headed out to Lassen Volcanic National Park, where we hoped to find something more akin to a traditional national park, and where we planned to summit Lassen Peak.

Here are a few other images from our hike. Note how clear the skies are during these early parts of the hike. Weather would move in from the other side of the mountain, obstructed from our view for most of the hike.

View If Disney Made a National Park Image Gallery - 9 Images