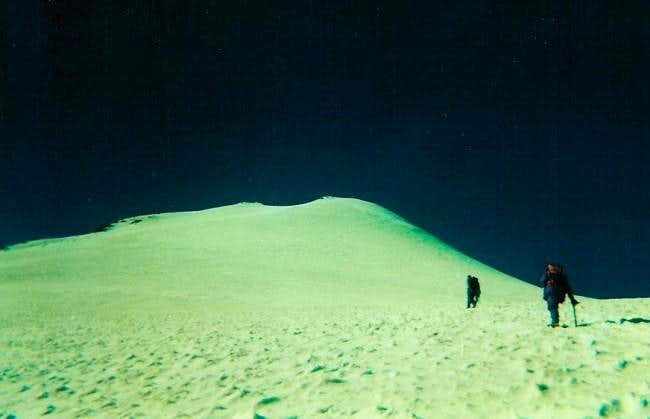 This photo resembles one I took in October 1951, fifty three years ago. I had just turned 18. The only difference is that my photo was taken lower down below the snow line and had Jesus and Moses in the foreground (Jesus and Moises). Jesus and I climbed above 18,000 feet and reached the base of the summit rock before a snowstorm forced us to retreat. Five years later I made it to the cross-crowned summit, this time with three classmates from Mexico City College.

That's cool. I often dream about what Mexico was like back then. Mexico City and Puebla weren't nearly so large; were more beautiful and original, so i hear. And the mountains had more snow and glacier, i hear. I try to find old photos of the Mexican Volcanoes, but they seem to be hard to come by. I am interested to know, for instance, how low was the Jamapa Glacier on Orizaba at that time? How far did it go down into the culoir below the Sarcafago? Perhaps you have some photos or remember it? That would be cool.

I hate to see global warming on these glaciers, but they have been receding. But there have been some recent scientific studies indicating that global warming is ending or already starting to reverse. Perhpas it is wishful thinking; but after some 15 years of on and off drought in this region and higher temps, we are now having the ebst rainy season and best snow year for the moutnains we have had in perhaps the last 15 years. I sure would like to see the glaciers come back as they used to be.

Since I climbed Orizaba in 1951 and 1956, I have no way of comparing snow conditions then with what they are now. I viewed the mountain in 1985 and 1991 when I traveled from Mexico City to Veracruz. The snowcap seemed to be sparcer and higher on the mountain than I remember seeing it in the 1950s. The names you give to the glacier and other sites were unknown to me in the 1950s when we approached the mountain on horseback. I only remember trying to sleep next to a fire at about 14,000 feet in a shallow cave known as the Cueva de la Muerte (Cave of Death). A high spur to the left was probably Piedra Grande. My recollection is that the ascent seemed to be endless and mostly on hard snow. We used crude Mexican-forged crampons and ice axes that were quite adequate for securing us on the forty degree slopes of Popocatepetl and Citlaltepetl.

I recently submitted photos of Popo and Orizaba as they appeared in October, 1951, and December, 1956. One from 1951 was taken from Paso Cortez after a night of precipitation. One certainly won't see such snow on the volcano nowadays after a decade of activity.

Mexico back then was far more traditional and unspoiled than it is now. I was one of the first to drive down the central highway from Juarez. I remember seeing sombrero-ed and sarape-ed peons on burro-back ambling along the edge of the highway. The towns were still quaintly colonial and unchanged in three hundred years. Mexico had just emerged from the Revolution with less than half its present population. The Paseo de la Reforma was still an broad avenue of 19th century mansions with few if any high rises. Automobile traffic was much less and the entire city more charming and peaceful. One could get a comida corrida (running meal) for one peso or fifteen cents US.