Hiking on the Lüsner Alm

Hiking on the Lüsner Alm

In the northwestern corner of the Dolomites, the Lüsner Alm is an area of gentle rolling hills just above the tree line. There are hiking trails all over the place, but it wasn't a busy place when I was there. Perhaps the weather had something to do with that. Typical for the summer of 2014 in the Alps, I experienced a mixture of sunshine and a bit of rain, and even a short thunderstorm.

However, merely the prediction of bad weather won't stop me from heading up into the mountains today. Of course I will plan my route in accordance with the forecast. If it turns bad, I don't want to be too high, and I want a fairly short route to a safe place. And on this day, I figured that the Lüsner Alm had all that. First of all, there were plenty of refuges in the area. Though not all offered the option of staying the night, they would be fine to take shelter. Furthermore, being not far above the tree line meant I wouldn't have to descend far for the relative safety of the forest. In case of rain I'd still get wet, but the risk of lightning would be low.

I started late. I don't remember why, but I presume it had been raining earlier on. On planning the day, I had expected to start hiking at Lüsen (972m) and start with Astjoch (2194m), but I got lucky and got a ride from a couple of locals to a parking lot somewhere around 1600 m or so. That meant I had more time to spend higher up, to explore the ridge south of Astjoch. In fact, I reckoned I might make it all the way to the Maurerberg (2332m) if the weather would hold.

At first it did. However, not far below my first summit of the day that changed. I saw a couple of buildings, and quickly changed course, heading for cover. It was the Elnhäuser Alm, a private summertime farm. A local family with kids, enjoying a day in the mountains, were already sheltering, but there was plenty of room for one more. It rained and thundered, and we were happy to be out of it while it lasted, but the squall soon passed and right after that the sun came out again. Typical. 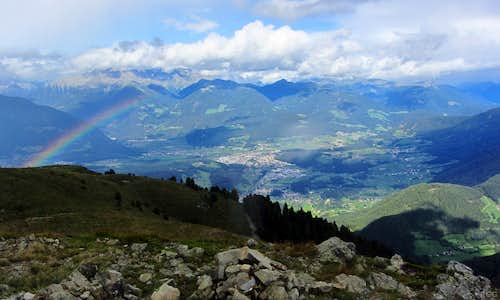 Fickle weather
All together we went up to the Astjoch to enjoy the views. For them, that was the high point of the day, but now that it was sunny again, I wasn't done yet. And the rest of the afternoon turned out to be fine. Mostly sunny, and no more rain. Many of the highest peaks in the distance were enshrined in clouds, but the views were still pretty good.

I hiked south, as planned, going over one bump after another. Now, the distance on the map didn''t look overwhelming, but with all the ups and downs it took time. When I reached the Glittner Joch (2191m), it was almost 6 pm. The Maurerberg was still a fair distance away, and I realized it was much too late to go there and still get back to the valley below before darkness. Besides, I already knew I was much too late to catch the last bus, so I was hoping to catch a ride or I would face a very long walk back to Brixen, where I was staying. 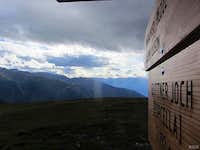 Sign post at the Glittner Joch
I descended real fast. I had a strong incentive: Hitch hiking in the darkness is much harder, and the earlier I would get down to the valley the better, for there would be far less traffic later on.

I reached the main road just south of Sankt Niklaus. In my experience, hitch hiking in the mountains when there is little traffic works quite well. Some drivers are hikers themselves and recognize a kindred spirit. Others are locals, often on a short drive, but quite a few are still happy to help out a visitor to their neck of the woods.

But while little traffic is good, there has to be some traffic to begin with. And there wasn't. I had no choice but to walk down the road, heading for Lüsen and hoping that traffic would pick up from there on. If not I might be hiking for at least three more hours. But once more I got lucky. Just as I reached Sankt Nikolaus, a car pulled up at one of the local holiday homes. The driver was a kindred spirit indeed, in the form of a German holiday maker and hiker. And to my welcome surprise he offered me a drive down to Brixen. A nice end to a nice day.

Campill summit panorama of the Senes and Fanes Groups