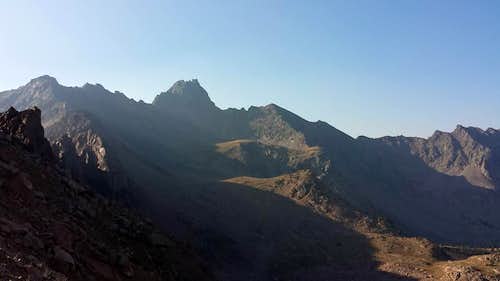 Hilgard Peak, as seen from the south, 11,316 ft, 44.91640°N / 111.4597°W.
Hilgard peak sits in the southern end of the Madison Range, and is the tallest point in MT outside the Absaroka/Beartooth range. Clearly it is an essential summit for any extreme outdoor enthusiast in the state, however the nature of this hike took on an entirely unique challenge of itself.
The approach to the peak first consisted of a five mile hike with 2-3k elevation gain to avalanche lake on a well populated trail, followed by another 4-5 miles treck off-trail over a nearly 10k elevation ridge. After scaling down the other side, we maneuvered through the boulder field to the small lake below the peak. From here, multiple carins marked the popular route (mostly class IV or less) to the summit. 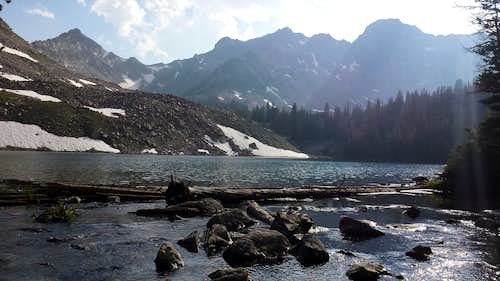 Avalanche Lake Aproach
After leaving Bozeman around 6am, a morning drive south led us to the trail head in Beaver Creek. Two hours later we arrived at the Avalanche Lake Tr. No. 222, and began our ascent. Throughout the morning, a noticeably thick layer of forest fire smoke filled the drainage. We briefly stopped at an established campsite near the east end of the lake, and continued around the south end of the lake heading west. There are a number of other smaller lakes further up, and after reaching the far end of the main lake, the trail dissipated. From here, we chose a line over the scree to scale up to the ridge into the Hilgard Creek drainage. 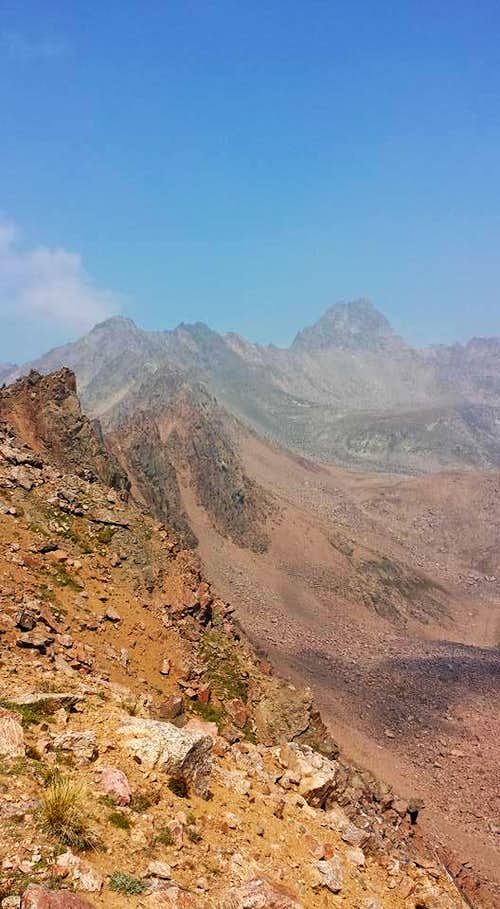 From the ridge, looking toward the peak
From here we walked east along the ridge to an easier area to descend into the boulder field. After reaching the bottom, we picked our way through the boulders for a few hours toward the base of the peak. This part of the hike was tedious and time-consuming as compared to the rest of the hike. We climbed to a natural lake that rests in a grassy meadow at the base of the peak at roughly the same elevation as the ridge before. If we were to repeat this hike, this would be a perfect base-camp for a 2-day trip. There are many large boulders for shelter, and water from the lake (there was a lot of algae in the lake at the time, we did not filter water from the lake).

Looking Back toward the ridge from the base of the peak
After a quick break, we looked to find the best route up the face of the peak. From most photos you could find on the internet, the ascent is as ambiguous and daunting as the pictures suggest. From previous research, we found a route starting at the right edge of the peak, where we followed a few carins up a hidden chute moving left (relative to the picture below). From there, we took a route to the right that led us through some sketchy (at or near class 5) climbing, however the carins continued to the left we later found for an easier route. We encountered another climber here, who was near to the summit. There are multiple false summits as you near the top, so make sure you head for the northern-most point (right side of the photo). 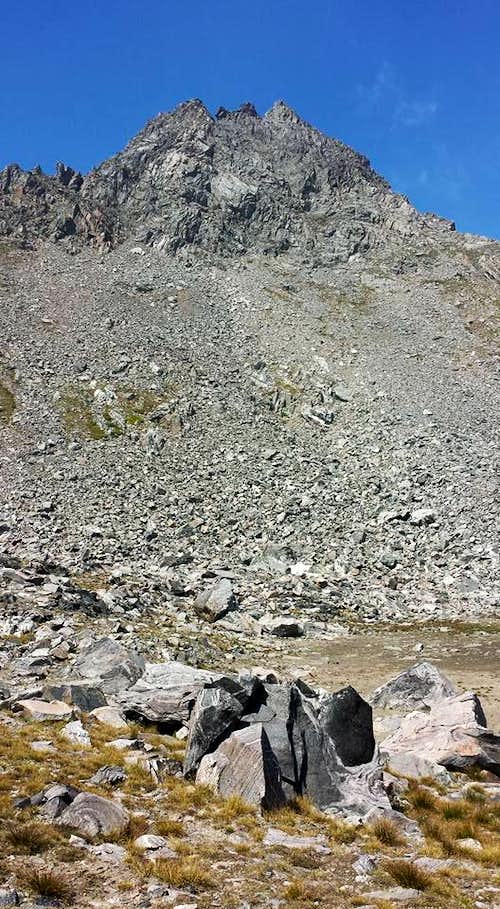 Looking up
We summited around 3pm, and headed back down the mountain. A word of caution: by the time you have made it back through the boulder field back to the base of the ridge, try for a route that heads toward the west of the low point on the ridge where the rock/scree there seemed more stable. This was the most difficult portion of the hike by far, since nothing you step on stays still when scaling this ridge line. We were able to make it back to the car a little after 9pm.
Overall, probably the most monumental hike we did in MT for the whole summer. If I were to do it again, I would break it up into 2 days for the same route. There are a lot of fun features on the peak itself, and plenty of space to camp, either in Hilgard Creek basin, or Avalanche Creek basin.