HIMALAYA - The Tribulations of Mick & Vic

HIMALAYA - The Tribulations of Mick & Vic 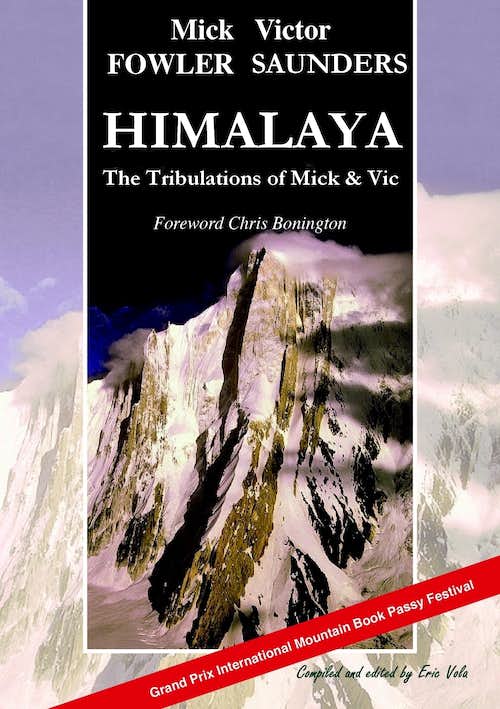 Published by Eric Vola and the two authors on Lulu.com, Amazon & Barnes & Noble in June 2017 (first as a print on demand paper book and then as an E-Book on Lulu.com and Amazon).

For two to three years I tried to have one of the books written by Mick Fowler (Vertical Pleasure and Ice is Nice) and Victor Saunders (Illusive Summits and No Place to Fall) published in France to no avail. Then I had the idea to create an original book in selecting texts they each wrote about their common climbs and Himalayan expeditions, intertwinning them with the idea that the publisher would then have twice more reasons to publish it.

But as I advanced in my work I realized that because of the two authors very different characters and sense of humour the intertwinned texts made a much richer story than each single one. Mick Fowler, always positive, direct and fast as litghning style in life as in climbing contrasted vividly with "Slippery" (Victor's nickname given to him in his young years by his friends and style in use, and rightly so) wry British humour quite influenced by his Russian origins and his digressive, imaginative style and the result is quite unique in mountaineering literature. Although it is made up of texts already published (but for the last Chapter - Their Sersank first ascent) it is essentially a new book where each of the two authors complete each other giving what we nearly never get from a single author, the full view of the two members of the same party.

For me this book is a superb example of a case of 1+1 = 3 and a new book standing on its own. Eric Vola

Mick Fowler and Victor Saunders, famed British alpinists learned to know each other while winter climbing in Scotland, in all kind of weather, mostly bad: an ideal stepping stone for great Himalayan adventures. They shared three expeditions in Pakistan: The ascents of Bojohagur (7329m), Spantik (7027m) and Ultar (7388m).

The tales of these selected adventures, published separately over three of their books (rewarded several times - Banff festival, Boardman Tasker), have been assembled in a new book: HIMALAYAS - Mick and Vic’ Tribulations. The two pals' tales are intertwined and offer two visions sometimes similar, sometimes different of the same events, with a caustic humour at the turn of every single line. This refreshing, compelling text full of funny and uncommon anecdotes is also the story of their strong friendship.  Besides the amateurs of mountaineering tales, this book should please the amateurs of unconventional atmospheres. 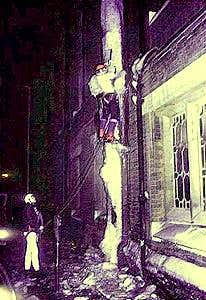 The jury so acclaimed an « invigorating, exciting book, full of facetious and surprising anecdotes and also a story of men and friendship.

”Without heroism but with their typical humour, Fowler and Saunders enjoy stressing the nonsense of their ventures in order to reveal their key significance: a true breath of oxygen and answers to the why.” Manu Rivaud (Sommets.info).

“For me, this book is one of the best mountain and expedition tales. Refreshing, inspiring, it offers the reader a nice tour in the Himalayas and will make him understand what alpine style is. I am sure that the tribulations of those two partners never short of humour will enchant you…” Catherine Destivelle

What a pleasure to get the English version of Mick and Vic tribulations! The French version did not do much for me. It was weird to hear the story told by two of my friends in a language that is not their own. With the English version, you feel you are in the room with them, with their dark humour mixed with cold analytical powers when making decisions. The warmth of their friendship is palpable, the very British understatement always present. What an example they are setting! When most people would be retiring to their slippers they are out there tackling long technical remote routes!

A tribute to Eric Vola for coming up with the idea to put together this highly entertaining dialogue of the two tales of the same story and actually bringing the project to fruition. Besides the athletic feat it also shows a more holistic side of mountaineering where the travel experience, human relations, poetry, an aesthetic search of the best line all play an integral part in the adventure. Françoise Call


It was in 2015 that the book of Mick Fowlers and Victor Saunders shared experiences won the grand prix at the International book festival at Passy (near Chamonix). Published by the Editions du Mont-Blanc and in French it was a neat solution to getting the best of their writings and into one volume. Over the years and on expeditions such as Spantik, both Mick and Vic honed their climbing and observational skills to become renowned writers and exploratory Himalayan climbers.


The “Trials and Tribulations of Mick and Vic” condenses the stories, those gems of wit and banter, into one book telling the tales from both sides and is perfect for savouring those moments of expedition life, and  the, at times, maddening illogic of trips to faraway places in order to simply climb.

Of course it all begins in the pub and as the beers are downed the euphoria gains in altitude until the same people who swore, after the last time, never again find themselves and once again thrown together for one more adventure. Passages like;

“The basis of optimism is sheer terror” “Mick;

“Oscar Wilde” are excellent as also:

Mick after being snowbound in a miniscule bivvy tent for days;

“I have no doubt it will snow again in five minutes, but if tomorrow is good, I shall be so pleased, I shall walk around the tent in small circles”.

If you have been there it really does sum it up nicely.

Yes it all borders upon insanity and maybe they are a little touched, for instance I have climbed with both of them.Thanks go to Eric Vola for having the idea of putting these two characters together once again and allowing them to share those moments of doubt, humour and life on the sharp end of exploration. Andy Parkin (Chamonix)

Chamonix, bar National, summer 1976: Mick, twenty years old, Victor, twenty-five, meet for the first time and Victor bombards Mick with questions on the first big alpine route which he has just climbed, the Cecchinel-Nominé on the Grand Pilier d’Angle.


On their return to the UK, they form a partnership for Scottish Winter climbing. They make round trips of two thousands kilometres in a week-end in all kind of weathers. But, as Mick says in this book, because they shared the driving between four of them, it was really only five hundred kilometres each. It was in Scotland that Mick and Vic put in the training for their Himalayan adventures. 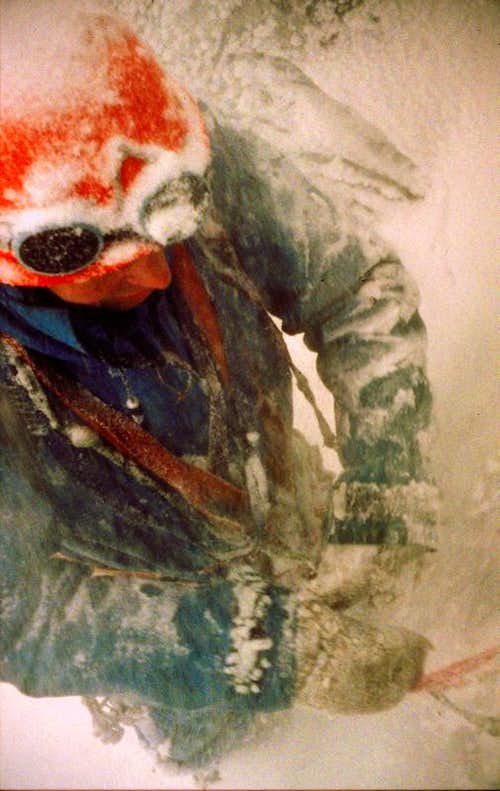 Victor, originally an architect and an excellent mathematician, became a UIAGM guide in 1996, then a member of the French Syndicat national des guides de montagne in 2003. He has been living in the Chamonix Valley for the last sixteen years; while continuing regularly to make personal ascents in the Himalaya, he has specialised in large commercial expeditions there. As a guide he has summited Everest six times, Ama Dablam six times, Cho Oyu four times, Manaslu once. He took part in the 1993 K2 rescue and, once again as a guide summited the seven summits. Along with his work as a guide, Victor has always carried on making first ascents in a personal capacity. 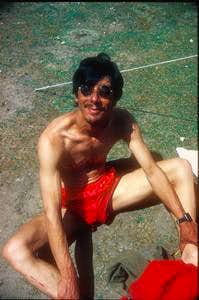 Mick is a week-end climber, a pure amateur. During the week, he works in the Inland Revenue tax offices as an assistant director. When you see his list of climbs, you realize that his free days are totally dedicated to his passion for climbing, specifically in the Himalaya. In 2003, Catherine Destivelle presented Mick and his partner, Paul Ramsden, their first Piolet d’Or for their ascent of the North-West face of Mount Siguniang. Christian Trommsdorff, president of both Piolet d’Or andGHM gave them their second Piolet d’Or in 2013 for their first ascent of the Prow of Shiva. This was their fourteenth ascents in the Himalaya. In 2014, also with Paul Ramsden, Mick made the first ascent of the North-East face of Mount Hagshu, a summit seen while doing their first ascent on Kishtwar Kailash. And Mick has no intention of stopping there - he said at the time: “This time on Hagshu, we noticed something else of interest. The Himalaya never cease to offer us opportunities. It is a fantastic period for a Himalayan climber.” This proved again to be the case when in 2016 Mick did the first ascent of the North face of Gave Ding with Paul Ramsden for which they received their third Piolet d’Or last year at La Grave. 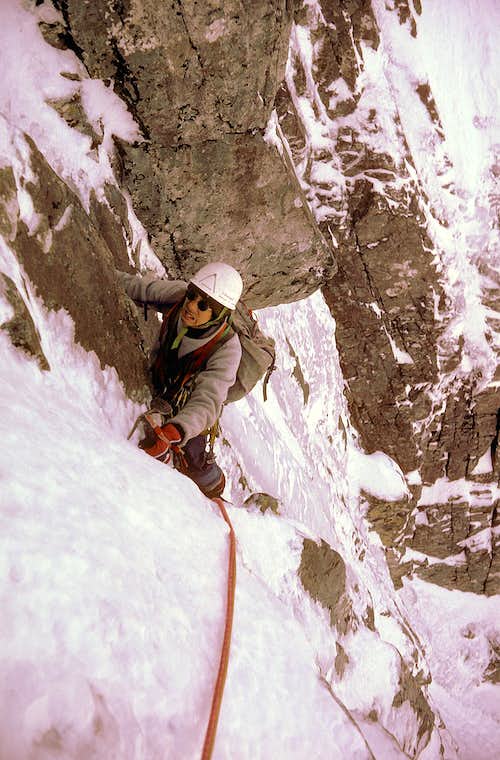 Victor on on Minus 0ne Buttress

Both Mick and Vic were keen when Eric Vola, their translator and friend, suggested amalgamating three of their four books, two by each authors, into one volume. After their first expeditions together, each of them has followed his own path but the book was a good excuse to meet up again. Although they share a passion for alpine style climbing, they are quite different characters - Mick is very straightforward, whereas Vic is more complex, « slippery » Vic as Mick and his pals have nicknamed him. For this reason their interwoven tales are complementary and enriching for the reader, a case of 1+1 not equalling 2 but at least 3. And also, their accounts demonstrate that the same events, both happy and dramatic, are experienced quite differently by the two members of the same party. 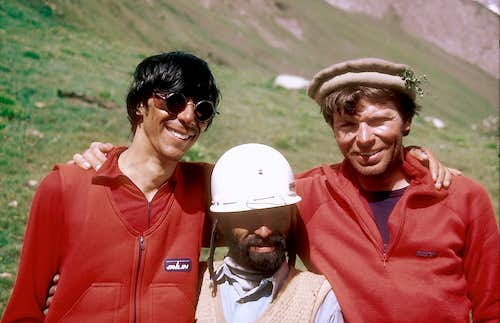 After summiting Spantik - Base camp with their cook 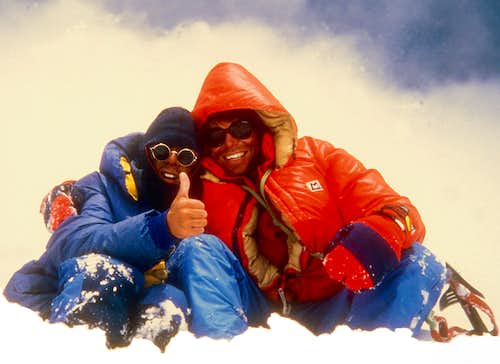 The result was a book in French which won The 2015 Grand prix of the International Mountain book festival of Passy.

This then led the two reuniting to make in October 2016 the first ascent of the 1100 m high Northbuttress of Sersank in India, Mick just getting to sixty and Vic to sixty-six, almost 30 years after their last climb together, the tale of which ends the book.

Both have a joie de vivre and a zest that will withstand anything. They also have a very British sense of humour, sharp and quick for Mick, caustic and sophisticated for Vic. Vic has written a new foreword for this book, which will, we hope, prove inspirational both to existing and perhaps also new generations of Himalayan climbers. 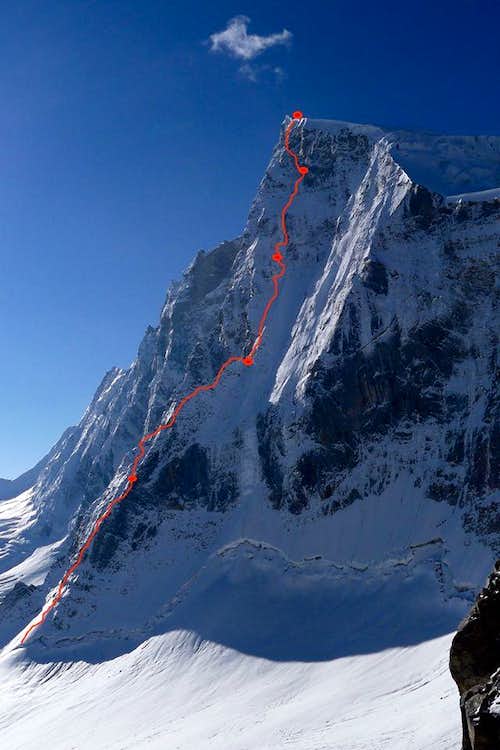 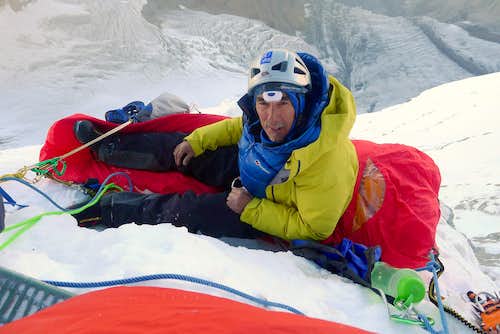 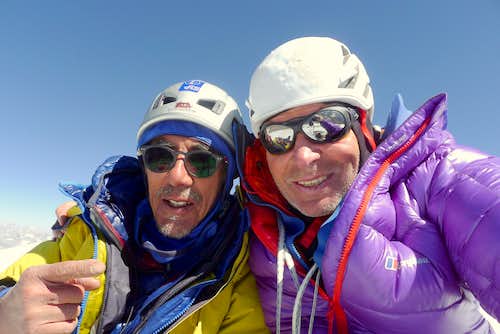 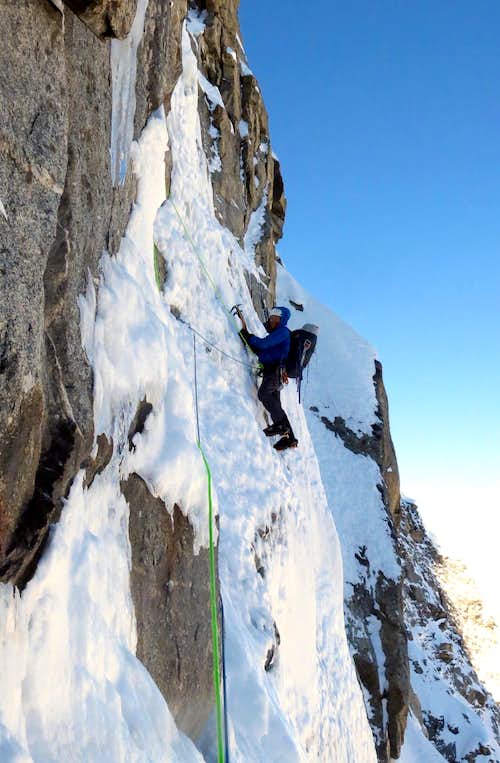 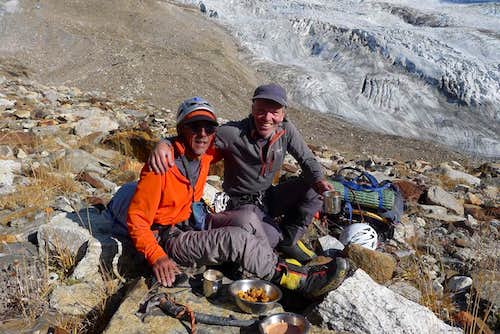 Back at Base camp