Profile from the east
Photo by Nickman 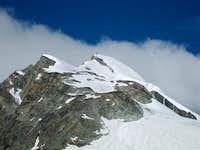 The Hohlaubgrat is an elegant and interesting route to the summit of this fine 4000 m peak which has been relegated to a ranking as one of the most simple 4000ers via its normal route because of the easy access via the Metro Alpin to Mittelallalin.

Besides the added elegance and interest, this route usually allows you to avoid the crowds of the normal route, unless you descend that way. It does require an overnight at the hut, but the alpine start from there puts you under normal circumstances on the summit before the arrival of the hoards from Mittelallalin.

Route from the Hut

The normal starting point for the climb is Britanniahütte. This can be reached by foot from Saas Grund or by cable car to Felskinn. From Felskinn go east up to the Egginerjoch to the hut. (See the main page for more detail)

From the hut you can see the base of the Hohlaubgrat. Go down to the Hohlaubgletscher using the same path as the regular route to the Strahlhorn. This is a good path starting behind the hut. Once on the glacier you the path to the Strahlhorn turning right in the direction of Allalinhorn. Unless there is new snow, there will normally be an established track. 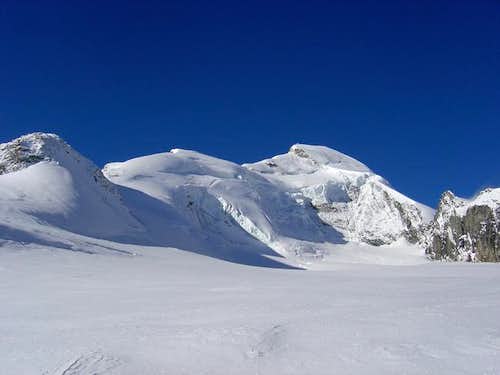 Hohlaubgrat from the glacier – Section One,- Rock Ridge is the hump on the left.
This is normally bypassed via the obvious ramp (in shadow) just beyond it to the snowy ridge crest which is Section Two. (Photo by: oberlea )

The Hohlaubgrat can be divided into 3 main sections:

ONE: A rock ridge at the beginning leading to a prominent snow saddle. This part of the ridge is normally bypassed.

TWO: A long snow ridge leading to the rock step.

THREE: The short rock step and short snow ridge to the summit.

SECTION ONE You must reach the prominent snow saddle. Starting on the Hohlaubgletscher there are two possibilities:

1) Pass the lower rock part of the E-ridge right on the Hohlaubgletscher (good visible path in regular conditions). Hike up the glacier and reach the Hohlaubgrat at the snow saddle via a moderate snow slope. This is the easier possibility and is done by most parties.

2) Go directly to the base of the lower rock part of the E-ridge. Scramble up this rock ridge (UIAA II). The rock ends at the prominent snow saddle.

Climbing on Section One:

SECTION THREE The rock step that is the crux of the route. It is climbed directly and there are some metal poles that may be used for belays. The rock step can have varying amounts of snow and ice depending on the time of year and the season. When I climbed the route in July of 1993, it was almost entirely snow and ice (FS).

oxygen11 gives the following description of fixed protection on the rock step (and a bit of advice) as of August 2008:

"The rock step has a number of bolts, on top of the metal pole (I only saw one). Worth noting: after rock step, scramble directly over the rocks in front of you, rather than trying to walk around them."

After the rock step follow the final snowfield to the summit.

Above the rock step:

Guide service site with a nice description and some good photos.