The Inca Empire extended its domains and power from northern Ecuador (Quito) to central Chile (Talca) south of Santiago.

In Ecuador, in the late 15th century, the Incas conquered a big part of the Andean highlands. But it is in the southern highlands were the Incas left one of their most notable marks and proof of its power after conquering Cañari lands.


They built a complex system of well made and maintained roads.


Some remnants of this extraordinary road system can be found at the southern end of the central ecuadorian valleys which leads to Ingapirca, the most important and best preserved pre – colonial Inca ruin found in Ecuador today.

The approximately 45 Km hike can be done in 2 – 3 days and follows the original royal road that linked Quito with Cuzco. The starting point for the hike is the village of Achupallas, 23 Km southeast of Alausi from where transportation can be arranged the day prior the hike (advisable). 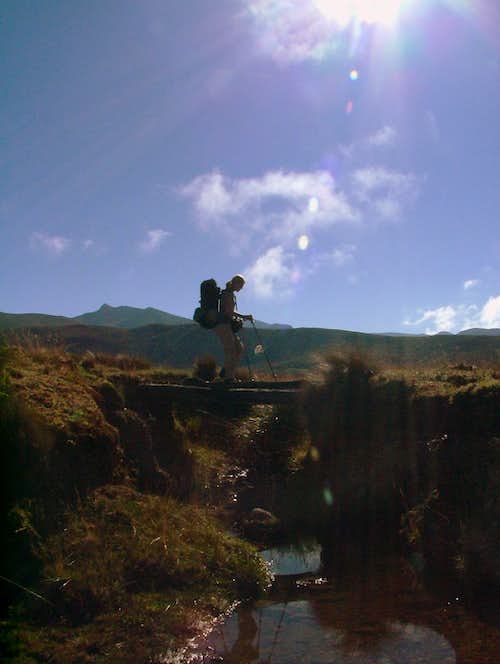 Buses and pick up trucks leave daily from Alausi to Achupallas around noon ($ 1.50 / 1 ½ hours) from Ave. 5 de Junio. It is possible to enjoy of the views by asking the truck driver to let you ride on the truck's roof. The views from Panamericana Sur until reaching the village of La Moya are spectacular, but even more amazing are those from La Moya bridge to Achupallas, a steep recent pavemented mountain road (12 km) will take your breath away by looking at the endless cliffs at the road sides.

Truck to Achupallas
Achupallas (3,350 m / 10,988 ft) is a small village set among cultivated slopes below the prominent conical hill of Mapa Huina (4,365 m / 14,317 ft). In the event of planning an early start from the village, a tent can be set up at the football field located behind the main plaza, west of the church.

The Trailhead to the Inca Trail to Ingapirca can be easily found after hiking up by the main avenue in south direction and always uphill. Just follow the road, pass the cemetery on your right (west) and continue on until you pass a couple of houses. The road turns right, crosses a vehicular bridge and then switchbacks uphill to the west.

The Trailhead (a stony muddy foot trail) will come into sight at your left side, 3 minutes after passing the last small store (tienda) at the left side of the road.

There used to be a small arrow sign (Camino del Inca) hanging from a eucaliptus tree and pointing south to the starting point of the trail, but it was removed in May 2009 by the villagers in order to promote guiding activity for Achupallans prospect guides.

Achupallas to Cuchicorral
(4 to 5 hours)
Once at the Trailhead follow the path along the true left bank of Rio Cuadrul. Just beyond the last house cross a footbridge and continue upstream on a clearly visible rocky path by the other side of the river. 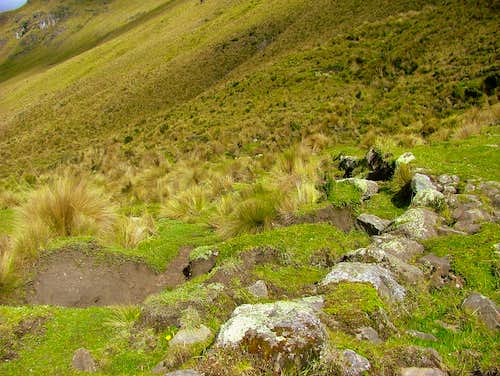 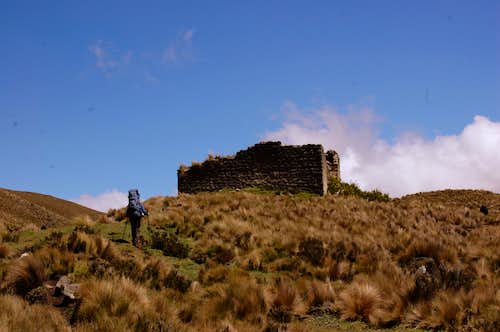 Arriving to Paredones, (Photo. Heloise, R.)
Continue following the stony path uphill which it becomes grassy after some minutes. Cross another small footbridge on your right side and start heading up (west) to Cerro Huapucas (3,650 m / 11,972 ft) foothills and traverse south on a major path.

Follow this eroded path for about 1 ½ hours, you'll see some dome – shaped grass huts constructed by sheperds on both sides of the valley. Pass just above some Inca remains (rectangular areas rimmed by a pile of stones - Cuchicorral). You'll find an open grassy area on the valley floor wich can be used as potencial camp sites.

Note: An alternative camping site, located just a couple hundred meters beyond Cuchicorral is Muyuna, a flat field at the shores of Rio Cuadrul and clearly visible from the trail.

This site is visited by cattle often but it gives you a good head start for the following day's hike. 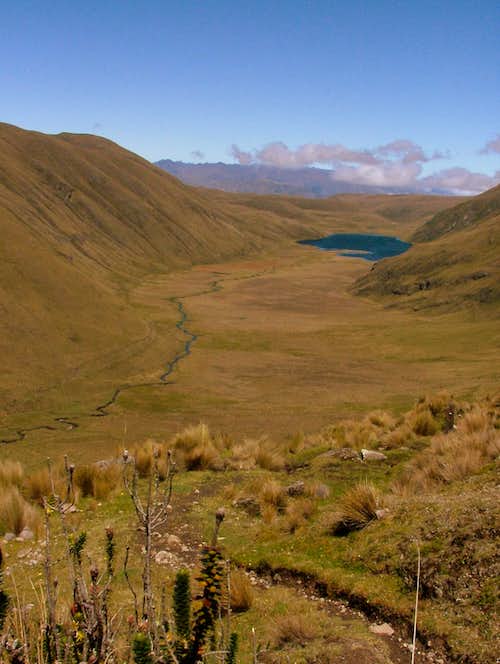 Laguna Culebrillas from Quilloloma
Beyond the remains and farther south the remnants of the old ingañan becomes clearly visible until reaching the head of the valley, 2 hours up valley from Cuchicorral remains. Pass by the righ shores of Laguna Tres Cruces (4,250 m / 13,940 ft).

Climb southwest following a well defined foot path which becomes eroded as you gain altitude. This path will take you up to the crest of Cuchilla de Tres Cruces ridge (4,400 m / 14,432 ft). The 30 – minute hike along the crest is amazing in a clear day. Laguna Santzahuin can be seen now down to the east and Masiso de Osogoche (mountain range) a bit farther up. Glaciated mountains as Chimborazo can be seen to the north and Altar to the northeast. 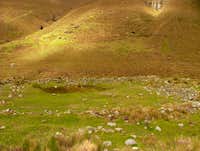 Keep traversing along the crest, until getting to the saddle between Cuchilla de Tres Cruces and Quilloloma where the trail bears left (southwest) off the ridge. Hike downhill the southern slopes of Quilloloma by an stony trail which looks more like a trench formed by little streams that run down the mountain. Laguna Culebrillas and the trail to follow can be seen from up there as the next valley to be hiked as well.

Once at the beginning of the marshy valley (3,900 m / 12,792 ft), a narrow stream that runs down from Quebrada Espindola should be crossed by jumping on the stones settled in the middle of it, just wade acoss. Cross a spar and sod bridge over Quebrada Santzahuin and continue along the southeast side of Quebrada Espindola valley by the old ingañan which gets very muddy in places.

The trail steepens a bit while passes by Laguna Culebrillas left shores. After 1 hour hike from Quebrada Santzahuin bridge, the Inca Ruins of Paredones (3,980 m / 12,792 ft) will come into view not too far away. The grassy area around Paredones might be a good area to pitch a tent, but it's advisable to set camp few meters southwest in order to keep this important archaeological site for future generations. Bulls wander all around this area and it's not easy to have a good relaxing night in the event of placing a tent between the cattle. Water is available from a new constructed water canal located 1 Km southwest of the ruins. Setting camp up here could be a good start for next day hike in order to get to Ingapirca complex before closing time. 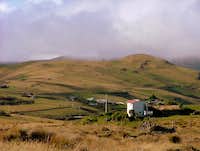 Village of San Jose
Follow the old Inganan in southwest direction. It becomes wide and rocky in some areas but it gets marshy later on. The road continues uphill for a while, passes near an area with lots of scattered boulders on the right side of it and then descents gradually until it finally gets covered by the vegetation. There's a new green sign, Parque Nacional Sangay.. continue a few meters southwest and then gain the first narrow footpath which runs in west direction to the reservoir. After a 30 minute – hike the footpath joins a narrow dirt road which runs parallel to a concrete aqueduct. It'll take you to a small cattle fence, cross a footbridge few minutes later and start hiking on the vehicular rode south to the village of San Jose (3,650 m/ 11,972 ft).

Keep hiking on the dirt road through the village. Turn right (southwest) on the first road at the T-road junction (there's a house on the left with a brick fence). After 40 minutes to 1 hour hiking on the same vehicular road you'll get Rio Silante bridge. Continue uphill for about 30 more minutes up to Ingapirca Archaeological Complex (3,160 m / 10,365 ft), the ending place of the trip.

Recently Ingañan has been altered by red color signals sprayed on the royal remnants of the Inca road. These marks on the stones were made in order to do some studies, measurements and for future restaurations on the road.

An entrance fee will be collected to hikers and visitors in the following years in order to provide sustained economic development to the nearby communities and to preserve the value of this archaeological road.

Sometimes sheperds tend to ask a USD. 0.50 fee for trail maintainance to hikers. Travelers should refuse to hand anything out in order to discourage this kind of abuse for future hikers. They aren't dangerous.

I recommend to make arrangements directly with the porters, who even though don't speak english, they do most part of the hard work, guiding, carrying, loading up the mules, setting up camps and cooking. Most of the companies do arrangements with land owners or "important" people from Achupallas which get's all of the money and paid to the porters only USD. 13,00 for the three days of trekking.

The best time to hike Camino del Inca is during the dry summer months of July, August and September. Roads, paths and trails perform dry, easy to find and hiking time can be minimized during the day. 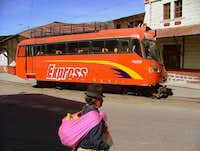 Meanwhile, hiking during the rainy season could involve some trail searching (at times) and stream crossing could become and issue. Length of hikes could increases significantly during this season as well. Anyway, hiking the Inca Trail is a worth it experience which can be done in either seasons.

Buses can be taken at the town of Ingapirca, just 10 minute walk from the complex. Buses to El Tambo (30 minute ride) cost USD. 0.50. From El Tambo it's possible to take buses to Cuenca, Alausi, Riobamba and Quito (every 30 minutes).

Camping spot
There are plenty of spots to set up a tent during the hike as well as rivers and streams that could provide clear water to your camp. Don't forget to boiled your water, use water purification tablets or a filter before consumption.

It is possible to set up a tent in Ingapirca Complex at the end of the trip too. By paying the complex fee you are entitled to use the campground located a couple meters below the entrance. There are restroom facilities here, as well as water and even restaurants. Recommendable if you want to take some early shots of the ruins being hit by the first day's sunrays and crowdless the following morning.