Inspired by the Past

2011 marks the century celebration of John Otto's founding of the Colorado National Monument. I dedicate this expose to the memory of a great man who spent much of his life protecting and promoting the Monument that in many ways has made my life worth living. Here is John's Story: Much of my research began with a small out of print book by Al Look. Much more information is available about John's life from Colorado History author Alan Kania.
http://johnotto.org/AboutJohnOtto.aspx
http://www.amazon.com/John-Otto-Alan-J-Kania/dp/1436306434

John Otto is the single most prolific historical figure in the Grand Valley of western Colorado. He was known as the “Hermit of the Canyons” and the “Trail Builder” who founded the Colorado National Monument in 1911.

I've spent years of my life seeking out relics and routes that John made to allow tiptoeing mountainous adventures just above Grand Junction, Colorado. I thought often of his vision for the land and awed at his craftiness. Further study of his life has revealed that John Otto's true legacy is much grander than the outdoorsman status with which he is credited. His greatest gift was his profound compassion for the well-being and equality of his fellow man… and woman. 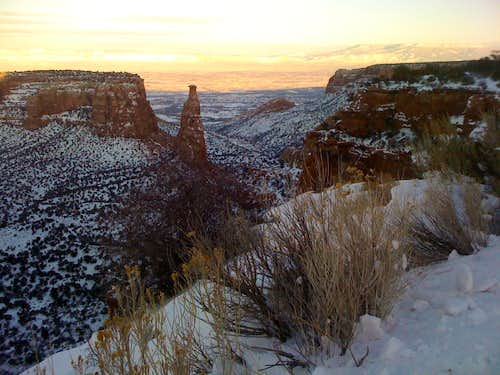 John said that soon after coming upon these canyons it felt like "the Heart of the World" to him. Indeed, John's defiant nature to save our lands may prove to be the heart that we all need to summon.

John was born in 1879 in Marthasville, Mo., to Carl and Amelia Otto. Carl Otto emigrated from Mansfield Saxony, England. He became an eccentric and perhaps perilously inquisitive professor at Eden Theological Seminary in Missouri. The cautious Lutheran Elders relocated Otto to Elmhurst College, Ill., to teach Greek, Latin, and ancient history and avoid confusing students in their religious studies. 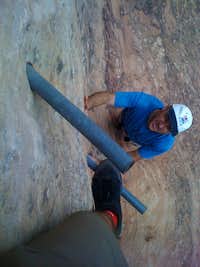 Protecting the "Heart of the World"

At 19 young years John Otto left Elmhurst to travel through western Canada and the northwestern U.S. He apprenticed in mining and dynamite blasting before settling briefly in Northern California.

John cultivated a rough and fiercely independent character that ran counter to the corrupt and well-connected mining companies of the West. Otto wrote frequent and livid letters to the Governor of California. He attempted to expose mistreatment of his fellow mine workers. The California governor placed him in the Napa State Hospital's insane asylum for his outspoken, progressive views.

Otto's letters were the primary grounds for his incarceration. It was apparently insane to openly promote equal rights for women, to promote eight-hour workdays, and to promote the creation of transcontinental and scenic highways. The Napa State Hospital found him to suffer from mania and reluctantly released John to his family.

After a brief time in Illinois, John relocated to Arkansas Junction, near present day Salida, Colo. Otto resumed his compassionate cause by letter correspondence with Colorado Governor James H. Peabody. John asserted that riots would likely occur if conditions for mine workers did not improve. His adamant solution was the institution of eight-hour workdays.

Fed up with Peabody's inaction on his proposal, he scheduled his own meeting to discuss the matter in person. Upon arrival at the Governor's office, Otto was promptly jailed on suspicion of attempted assassination with a concealed sharpened candlestick holder. Mine site riots happened soon after and the Army stepped in - on the side of the mining companies.

Released without charge, John moved West to work on water projects in the Fruita area. Otto fell in love with the sandstone canyons south of Fruita and proclaimed that the canyons “felt like the heart of the world.” 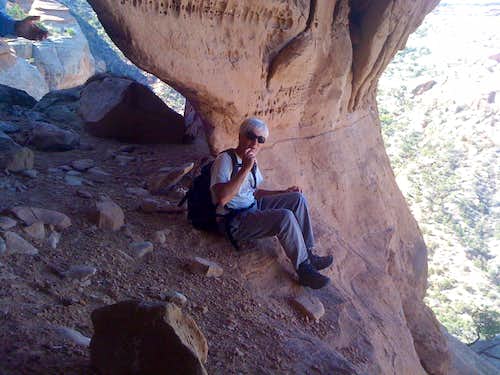 Window Pane Arch
Inspired by the unique sandstone landscape, Otto turned his persistent letter-writing barrage toward preserving and promoting the rim rock canyons and spires above Fruita and Grand Junction. He wrote President Taft on a weekly basis as well as frequent letters to the editor of The Daily Sentinel. His letters were primarily focused on promoting the canyons to National Park status, though he rarely stayed on message and frequently slipped in grander political and social views.

John Otto's overlying theme for his Monument was to honor the independent spirit of American patriotism. He particularly admired the writings and philosophies of Thomas Jefferson and the enlightenment of the founding fathers. He named many of the towers for presidents and patriotic themes. Only the great Independence Monolith retained its patriotic name. He had his wife carved the Declaration of Independence into a boulder below the namesake Independence Monolith. He also carved personal messages in undisclosed locations deep in the Monument.

John Otto on the crux of Independence Monument. 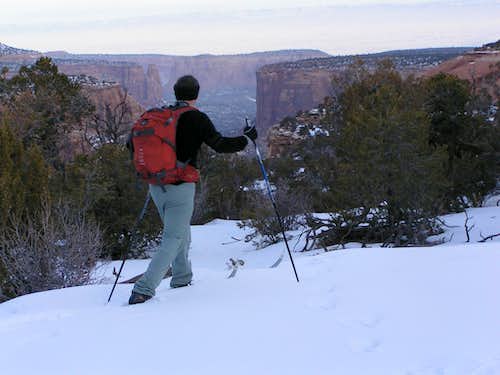 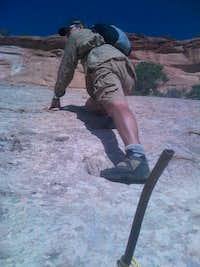 Otto Feratta
Change comes to those who write
Otto's brash and sometimes disjointed writing style moved many in the Grand Valley to support his monumental cause - if for their own eventual gain. He also made fervent enemies with his call outs of the local KKK party, the communist party and other social conservatives. It was as dangerous then - as it is now - to be outspoken against self-interested bullies protecting the status quo. It was also perilous to dangle from precipitous rock faces and blast trails of the future. Despite both perils, John Otto persisted in promoting his grand monument along side his sacred social causes.

After the 1911 founding of the Colorado National Monument, he was paid $1 per month to continue to care for and promote the Monument. He continued to build roads and trails while scheming ways to promote recreation and visitors. He enlisted the local Boy Scouts to sell wooden nickels to place a herd of Buffalo within the park borders as well as other wildlife relocation to add to the land's attractions. He was dedicated to preserving and sharing the walls and spires that called out to him.

Without cease, well into the 1930s, Otto continued his advocacy for women's suffrage, for general social equality, and for greater expansion of the highway system. Irksomely to the town of Fruita, Otto wanted the main road to travel from the Grand Mesa, over the Monument and onward to the Grand Canyon rather than across the broad desert to Salt Lake City. He never ran out of ideas and odd ways to explain and promote them. John's visions were grand, if sometimes delusional. 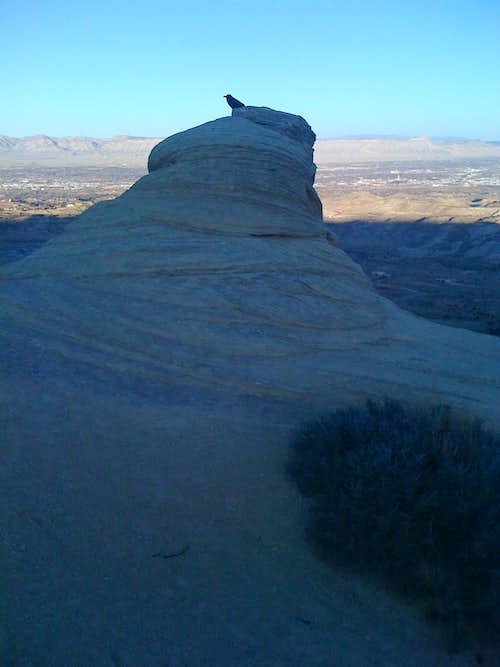 Here a large table like rock stood in balance with John Otto at its side. Now a raven graces its summit look in the direction that John left to retire. Sad departure but a calm retirement in California.
Otto relented his efforts to change the valley and its residents. He also began to have rocky times with the hierarchy of the National Park System. Seemingly dejected he left the Grand Valley without fanfare for Yreka, Calif., where he lived out his days as a hermit in a small shack on a shady forested creek.

John Otto's iron pipes will rust, his chopped footsteps and bold carvings will fade but his compassionate legacy will grow and give hope to a strong, healthy land, and a truly free people.

A new memorial to Otto:
Michael O'Boyle and Dave Fischell and many others improved Otto's modest Yreka grave with a black rock base and a sandstone tower (from Morrison, CO?).


For more details about the fascinating John Otto, read “John Otto: Trials and Trails” by Alan J. Kania. It is an excellent read and is widely available in local bookstores. 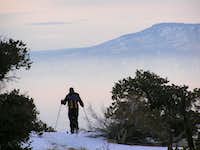 
Adventure seeker and writer Seth Anderson is founder and one of the owners of LOKI outdoor sportswear.

Thank you to Everyone, come see the Monument in 2011! 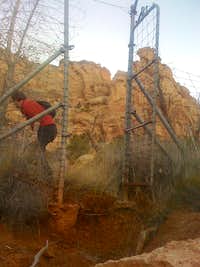 For their excellent dedication to a beautiful cause for beautiful people.

Adventure seeker and writer and artist Seth Anderson is founder and one of the owners of LOKI outdoor sportswear. 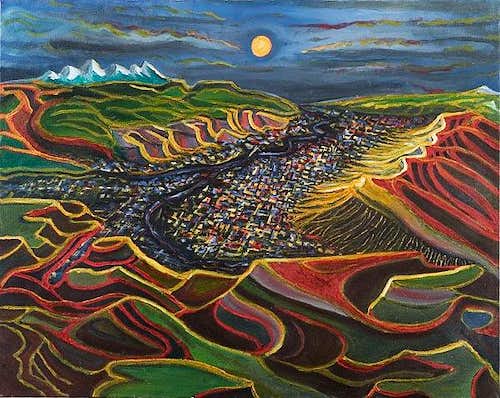 My Grand Valley artwork like this: Grand Valey Glows at Night from a glow-worm perspective.SIA (2010) Seth Isaiah Anderson 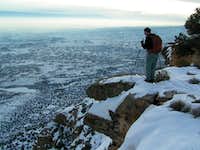 You really got me wondering where that photo was taken at??? Nice article, I've always admired Otto's history relating to the Mounument's inception.

Those pipes are not there anymore... but the whole make the route easier to climb, otherwise it would be rated as much more difficult route.

I learned something new today. I'm going to have to check that book out and give it read. Thanks for creating the page.

Thanks Sloan. I like learning too, especially things that relate to my area. Though, John Otto is an interesting and strong character. Alan's book is excellent. I think Amazon would be the easiest place to purchase. Grand Junction bookstores have them in stock, perhaps other Colorado and maybe Utah stores would as well.

I am from Junction originally and have also quested after some of Otto's routes. It really is amazing what he accomplished on the Monument. I am definitely going to have to check out window pane arch now. I've hiked all of no thoroughfare a few times and never noticed it. Thanks for the nice write up!

thanks for noticing and encouragement. I sometimes hope that there is a grander meaning for "our" valley than just the Junction of two rivers...

Come back by and visit sometime, I wrote my account of the Window Pane Arch last fall... basically turn right just above the first high falls. Go up the drainage to near its end and get up in the major "cleft" in the right or north wall of the upper canyon.

Seth, It's good to see you're using your down time to do some writing, I hope you're healing well. Thanks for promoting America's Greatest Folk Hero, John Otto. The Legacy of John Otto is too big to be ignored and too true to be turned into a mere legend. PBS is working on a documentary that will be out in the Fall. At www.JohnOtto.org people can tune in to see events going on to explore John Otto in the Monument in 2010. We are identifying "Ottofacts" of John's that are still visible along trails and in the red rock canyon walls. I would definitely recommend Alan J Kanias books www.JohnOttoBook.com.

Look forward to seeing you back out in the canyons soon Seth.

Yeah!!! I just tried to get Ken Burn's group to cooperate / get involved with involved / Nat Geo channel and or A&E affiliates to tell John Otto's heroic story. I got the fastest blow-off in years... too busy to even look into it- I look forward to seeing PBS's John Otto story!

I was reading this again and am back in GJ and wondered it you know anything about the CCC camp locations and where the original entrance to the monument was.

Ranger Bill Rogers suggested to me that a huge CCC camp was along the Black Ridge Trail just above the TH shared with upper Monument Canyon TH. The Rim Rock road is closed from upper Liberty Cap TH to Monument View, so a scenic walk would be required until March to see the area. There may be some car carcasses, perhaps some outlines of the walls. I didn't see much in the area but I didn't investigate long. Good luck!

Re: CCC above Monument Canyon TH

Thanks. I've noticed some odd paddocks in residential areas by the white rocks and along the Monument fence and was told that it was a cistern for a CCC camp. Just wondered.

I've noticed those. A very cool and extensive set-up cistern is surrounded by a high fence (open gate) straight above the White Rocks, just under the "Corner Tower" of Gold Stay Canyon.