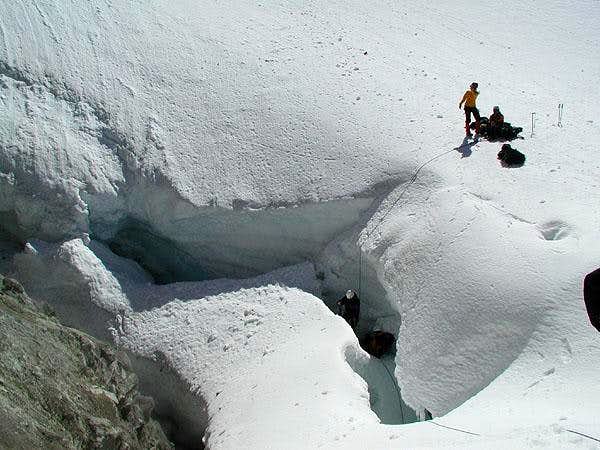 July 01, 2001 Mount Hood Climbing Accident (part 3): Luckily for this climber, he ended up in this crevasse / fumarole and not the other fumarole (where people are typically burned and asphyxiated before dying). He was also lucky he didn't fall farther west and fall in next to the rock where he would have been harder to retrieve. As it was, he had to use his elbow to keep from falling deeper and the worst injury he sustained was a broken ankle. Initially, one climber was lowered in to communicate with the climber and assist in rigging a system to retrieve him. Photo © John Wang. Accident Photo Sequence: [ 1 | 2 | 3 | 4 ]
Â« PREV NEXT Â»

The idea of being elevated by such makes me realize how painful that alone must have been, not to mention everything else involved in that situation; yikes! Glad to hear he was retrieved; there's one the mountain didn't claim.