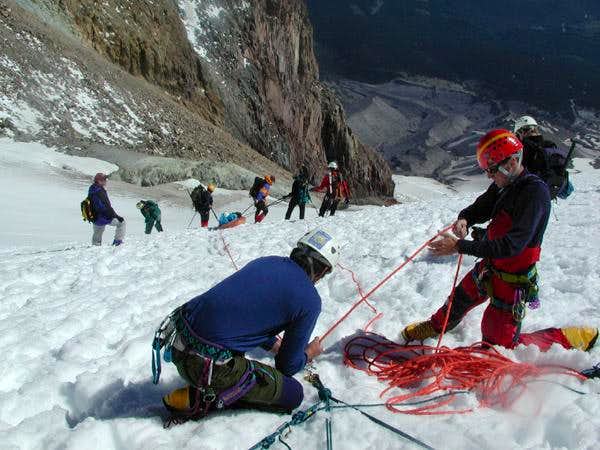 July 01, 2001 Mount Hood Climbing Accident (part 4): On July 01, 2001, a climber above me fell from below the Pearly Gates into a crevasse / fumarole. While the first official rescue personnel (a USDA FS climbing ranger) didn't show up for 4.5 hours, over 15 volunteers were present to assist. We were lucky to have a number of very capable individuals including (but definately not limited to): Jim and Steve from Western Montana Search and Rescue; Dan, an airborne medic with the Army National Guard's 1042 nd; and Will, a ski patroller. The team was able to rig a rope system to lift the climber out of the crevasse and then create a ski / rope litter to bring the climber over on to Hogsback. When AMR and PMR showed up (at about 3:10pm and 4:00pm respectively), the climber was transferred to the litter above and lowered safely down to 9,100' where a snowcat was waiting. It was 7 hours from the time the climber fell to being placed on the snowcat. Jim (blue shirt) and Steve (red bib) are shown above belaying the litter down off of Hogsback. Photo © John Wang. Accident Photo Sequence: [ 1 | 2 | 3 | 4 ]
Â« PREV NEXT Â»

And a good shot

Lots of skill and poise, thanks for documenting this. How did the injured climber fare?