K2 trek is one of the most exciting trips on earth. K2 base camp trek lies in the northwestern Karakoram Range. It is located in the Baltistan region of Gilgit–Baltistan, Pakistan. Rising steeply above the Karakoram Range along the Pakistan-China border and battered by atrocious weather, this pyramid-shaped mountain has always been the ultimate challenge for the world’s best mountaineers. This trek leads through spectacular mountain wilderness following narrow trails above the swirling Braldu River before ascending the extensive Baltoro glacier. However k2 trek is a tough but rewarding trek, with many days being spent on the rugged, tumbled glacier as you head up to and beyond Concordia where the Baltoro and the Godwin-Austen glaciers converge in a beauty and simplicity of ice and rock. 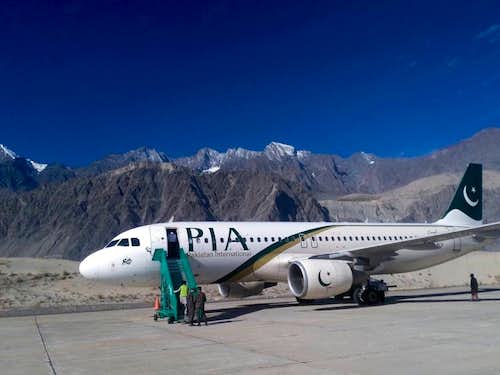 Landing at Skardu’s airport on our first attempt seemed to be a good omen. As we stepped off the plane the mountains surrounding us were stunning. But nothing compared to what awaited us.

We spent two days in Skardu for preparation and documentation with local authorities. What struck my foreign clients the most was how friendly everyone was. This country which all too often is poorly portrayed in Western media as unfriendly and teeming with Western hating terrorists is the exact opposite. Everyone was friendly, welcoming and proud. Certainly, the Baltistan region proved to be so over and over. We walked freely around Skardu at all hours and never felt ill at ease. I am not aware of an unkind word or gesture toward anyone.

On June 8 the trip began in earnest with a 7-8 hour ‘jeep’ ride to the small village of Askole. Although only about 150 km the Toyota Land cruisers were rarely above second gear and never into fourth. Parts of the route are ever changing as the creeks which can explode in size in a matter of a few hours bring down debris, especially rocks and boulders that have to be navigated around. Roads and bridges can suddenly disappear or be totally stranded.

The route initially follows the Indus river before crossing some low foothills that separate the Shigar Valley and Braldu River from the Indus until they join several kilometers downstream. The route after the village of Shigar becomes more and more breathtaking in every sense of the word. Crossing sometimes raging streams or clinging to the side of canyon walls with the swollen, dirty Braldu moving massive boulders as it thunders towards the Indus can be exhilarating or terribly intimidating. Our Pakistani drivers were maestros in conducting the Toyotas to their final destination of Askole. All the while the mountain landscape was getting more spectacular.

After camp setup and other details, we visited the tiny village including a museum that comprised one of the first homes. The area has been inhabited for over 400 years. The original inhabitants crossing one of the high mountain passes to escape aggressors and find a peaceful homeland.

Meanwhile, the rest did our acclimatization hike two days early. A 500-meter jaunt up and down a nearby mountain gave us a good workout. June 11 we were on the trail around 0600 hours. The weather had changed as we spent most of the day walking to Paiju Camp in intermittent showers and rain that carried over from the previous evening.

The trail gradually became more rugged including high traverses above the Braldu and tippy-toeing along the edge of the river that was a continuous ribbon of power. Another constant from the river was the rumble of large boulders being carried downstream by the power of the water. It often sounded like thunder.

Paiju Camp brought us to within an hours walk of the toe of the Baltoro glacier. The last night for a while that we would not be sleeping on or beside a glacier.

The weather began to improve and we were being treated to more and more spectacular mountains including names that litter the annals of Karakoram mountaineering history, such as Paiju Peak, Atwa, the Trango and Cathedral groups, Uli Biaho Tower, Liligo Peak and more.

June 12 the Baltoro glacier welcomed us this morning. Our progress slowed as the need to watch every step became not only routine but a requirement. For those of us with a penchant for wandering down a trail searching for hidden treasures like birds, animals, flowers, etc the requirement to watch every step caused a major and rapid change of technique.

Traversing a glacier is like following a male dog. Seemingly wandering aimlessly the reality is there is an end destination in mind. How one gets there is never certain. Glacier travel rarely follows precisely the same route from one day to the next. Routes may change during a day as glacial meltwater swells with rain or sunshine, the risk of rockfall increases with the temperature.

This is one of the most dynamic and interesting places on the planet. One can observe almost daily the Earth going through changes that form and create the landscape that in most other places occurred millennia in the past – landslides, avalanches, glacial lakes forming and disappearing, rivers carving away the land, cornices caving, rocks and soil being ground into powder, lichens, moss and plants doing their utmost to get for the most part a tentative and temporary foothold only to succumb to the power of change. But with time they become more permanent and begin the ecological succession that one day will see a meadow or a forest where today there seems to be only rock and ice.

More grand mountains revealed themselves: the grand Trango Tower. A spectacularly elegant and beautiful rock spire and the scene of one of the most legendary mountain climbing achievements when Doug Scott of Britain successfully reached the summit.

Each day we were steadily and safely gaining altitude. Our bodies were adapting to the declining levels of oxygen. Even so, most of us were finding hills that we could literally run up at lower elevations left us breathing deeply.

This day in which the weather started to turn for the better found us camping at Khoburtse once again being in awe of the spectacular views.

We finished the day at Udurkas Camp having glorious views of Gasherbrum, Broad Peak and glimpses of Gasherbrum I, Mitre Peak and more. The Nameless Tower was dominant from camp.

As we reached the camp we observed a large, beautiful cornice high above our camp. I thought that having a large ridge between camp and the base of the mountain was a good thing. And it was as about 2:30 AM many of were awakened by a thunderous rumble. The next morning at least half the cornice was gone. This was the first of what would become a regular event of avalanches and landslides letting go at all times of the day and night. Those at night, however, seemed more ominous as you lay in your tent with nothing to do but listen and hope it stops or misses.

June 14 we trudged up the Baltoro glacier and on to Concordia, another legendary site sitting at the foot of Gasherbrum IV. It is the confluence of the Baltoro, Concordia, and Godwin-Austen glaciers. Here, facing Gasherbrum IV a right turn leads to the basecamp for Gasherbrum I and Gasherbrum II. A left turn takes you past Broad Peak basecamp to K2 base camp. This is the greatest concentration of 8,000-meter peaks on the planet. It truly is the Throne Room of the Mountain Gods.

On the way, we had also passed Masherbrum which is also called the Queen of the Karakoram and was initially believed to be the highest of the Karakoram peaks. It was designated K1 by Thomas Montgomerie of the Great Trigonometric Survey of British India when he first saw the mountain as he approached it from Hushe. Hushe is located one valley South and was our final trekking destination. We had also passed the Young husband glacier on our left with the Mustagh Tower. This is a route that will take a trekker to the North side of K2.

We spent the rest of the day marveling at the spectacular scenery and depleting our retinue of superlatives. K2 meanwhile kept a steady vigil at the head of the Godwin-Austen glacier. It seemed we were continually checking to confirm this natural miracle was still there every few minutes.

The Concordia glacier is one of the coldest places to sleep. Several hundred feet of ice, an elevation of 4,500 meters and an almost constant wind all contribute.

K2 base camp at 5,500 meters higher is substantially colder which would cause our support team to be exceptionally uncomfortable. Our porters like most porters or Sherpas around the world rely on the seasonal work provided by adventure trekkers or mountaineering expeditions for the income to support them and their families for the entire year. The tourism industry in Pakistan has been hard hit over the past 15 years beginning with 9/11. Western media continues to focus on the negative fringe groups casting widespread misperceptions about Pakistan and Pakistani people. There is no question that there are Taliban and other unsavory factions in Pakistan, but they are in the vast minority. No one wants them gone more than most of the citizens of Pakistan.

After visiting K2, we followed the same itinerary back, via Askoli village, Shigar valley then to Skardu. We Spent tone night in Skardu before taking the spectacular flight to Islamabad. Skardu to Islamabad is flight is weather dependent, but we were very lucky. In case of bad weather, most trouts would drive on Karakoram highway to Chilas for overnight stay than drive to Islamabad. Our adventure in Pakistan was concluded here, our guide transferred our foreign clients to the airport for their onward flight to their home country.

I would recommend that everyone doing this trek must be used to multi-day hill walking, be able to cope with sustained walking on rough and loose terrain and have a high level of fitness to fully enjoy their time on this trek. Previous walking and trekking experience is recommended for this trip. Most days involve 5 – 7 hours walking plus plenty of rest stops. The trek is tough and demanding but the rewards are spectacular.

K2 was discovered in 1856 by Col. T.G. Montgomerie of the survey of that time India, and it was given the symbol K2 because it was the second peak measured in the Karakoram range. The name Mount Godwin Austen is for the peak’s first surveyor, Col. H.H. Godwin Austen, a 19th-century English geographer.

The first attempt to reach the summit of k2 was made by an Anglo-Swiss expedition in 1902 that ascended to 8,600 feet (5,670 meters) on the peak’s northeastern crest. There were many other unsuccessful attempts until 1954. Finally, in 1954, an Italian expedition consisting of five scientists (including the geologist Ardito Desio as leader), a doctor, a photographer, and 12 others, including a Pakistani, managed to conquer the Abruzzi Ridge despite the severe weather conditions.