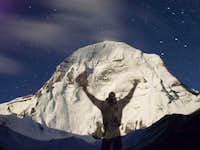 Kailash is locally more known as Kangrinboqe (Feng). It is the highest mountain in the western part of Gangdise Shan. The surroundings are very beautiful, with Lake Manasarovar close by and the gigantic Gurla Mandata (7728m) in the distance.
The mountain is sacred and therefore it's not allowed to climb to its summit. An odd thing with Kailash is that it's not holy only for followers of one religion, but for three! Buddhists, Hindus and the followers of the Bön religion all see the peak as sacred.

There are large amounts of pilgrims going to Kailash every year. Their main aim is to walk a so called kora, which is a circumnavigation of any object considered sacred. It can be a rock, a shrine, a mountain or even a whole mountain range. A turn around Kailash is suppused to be one of the most important ones a Buddhist can do and according to the myths you'll be granted nirvana if you walk 108 times around the peak. It's quite an achievement if you do it, as the kora is 53 km long. 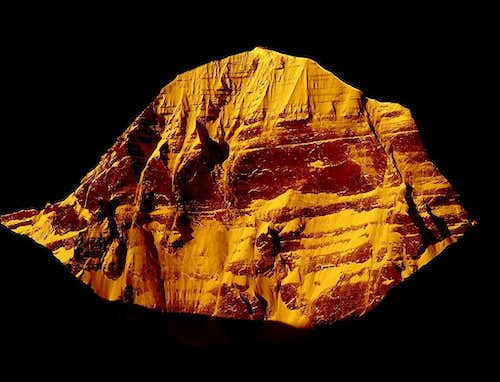 Kailash is a long way from everything and count on at least ten days from home to the foot of the peak. Most people want to play it safe and acclimatize properly and set more days aside for the journey to the mountain.

These are the most common ways to travel from and to a starting point.

There are four main ways to reach the peak.

Just to mention, Kailash is sacred to the faith of Jainism as well. So it actually is important to 4 religions! Beautiful.

Will add the info. Thanks. What is Jainism? I've never even heard the term before.

Around the time of Buddha there was another holy man who started a new religion in India which is similar to Buddhism in it's pacifism but they also advocate extreme veganism. The Jains won't eat anything pulled from the ground like Potatoes, Carrots, Onions, etc as pulling the roots out kills the plant. They also cover their mouth so that they don't accidentally ingest flies. Initially, Buddhism spread across India and overseas and Jainism was a strong competitor. However, over time Buddhism lost out to Hinduism. Approximately 4 milion Jains in India currently and 8 million Buddhists. Despite their low numbers they made a large impact on Hinduism.

Thanks for the info. When it comes to the eating habits of the Jains it sounds a bit like the followers of Hare Krishna. As far as I remember they don't eat anything that "grows in dark places", i.e. things that grows underground.

I know about Russian Esoteric, who claims to have climbed Kailash. His story sounds convincing, but I think it’s fiction. His name is Yuri Zakharov, at one time he even published photographs from the slopes, very similar to Kailash. http://www.alpklubspb.ru/ass/a386.htm (in Russian, but I think the google translate will help.)

it is said that walking a circle around Mt.Kailash can erase the saint of a lifetime; and walking 108 can escape the cycle of rebirth. If walking a round in the year of horse, 1 circle is equal to 13. 2014 is the year of horse so many pilgrim will flood into the area for walking.