Ladakh. What a place. I have wanted to go there for a long time, and it did not disappoint. Some of the worlds most spectacular mountain scenery and matched by a very Tibetan flavoured culture, makes it a place that is unique. Not only is the whole area a high altitude desert, but it has a good share of Himalayan "big peaks" to play with. And so, with a planned trek through the amazing Markha Valley, it was inevitable that I was going to look for another 6000m peak to climb. I do have aspirations for mountains higher than that, but after the success of Island Peak in 2010, I really wanted to see if it was just a lucky break, or did I have the ability to do it all again?

Two days before the climb the sky was blue, the weather warm. Kang Yatze sat proudly among the treeless round mountains of the Nimaling area. We had left the jagged spike peaks of the Markha Valley, where we had travelled around 80km over high passes and through arid rugged terrain.

But now the hills seemed more reminiscent of the Australian Snowy Mountains, complete with granite boulders. Of course Australia has no peaks that resemble the glaciated massif of Kang Yatze and its neighbours, so it was still worth being there!

Kang Yatze is made up of several mountains, KY 1 through 4. KY 1 is 6400m and is considered to be quite technical. It receives a much lower number of climbers than its shoulder peak KY 2, which comes in at somewhere between 6200m and 6175m , depending on what maps you refer to! KY 2 is the second point on the right hand side of the mountain. This is the "trekking peak" , needing only basic alpine techniques to reach the top.

On the way to Nimaling, I noticed a rainbow of ice in the blue skies. This is a strong omen of colder weather ahead. Our guide Namgyal had phoned the HQ of Overland Escape (our trekking company) and the weather was going to include some cloud and maybe snow, but clearing later. The sky told the story.

Sure enough the day we arrived at Kang Yatze base camp (5100m) it was snowing all afternoon, apart from a clearing near sunset. Then as I prepared to sleep until my wake up time of 12.30 AM, I could hear the gritty sound of sago snow falling, sometimes as heavily as rain. My heart sank everytime I woke up. More snow falling!  I had come all this way to climb a peak, and now it seemed as if it was not going to happen. We would not attempt it if it was snowing heavily.

But at 12.30, the porridge was cooking and I sat in the mess tent having an early breakfast. My Nepali climbing guide Nima, was confident we were OK to go. And at 1.30AM we set off into the night, head torches illuminating the falling snow, as we somehow found the stone cairns leading a way up the ridge.

Although I could feel the altitude making the climb harder, I think I felt well acclimatized, after trekking for 9 days at high altitude. Of course it was hard and breathless, but I only had a slight headache, which a Nurofen soon took care of. It must have been cold, as my hydration drinking hose froze and soon I could not drink. I recall Brigitte Muir had warned of this on the Island Peak trek. But I found that if I shoved the hose in my jacket, it thawed in a few minutes and I soon got the precious flow of water happening again.

Drinking lots of water is crucial at high altitudes.

It seemed like endless up and endless night, but finally at a small strand of prayer flags we were at the "crampon point”. I think elevation was about 5400m. The sun began to rise, amid a clouded and misty dawn. Kang Yatze 1 looked down on us with a stern rocky face. Who dares come up to these heights? Its fearsome ice cliffs and broken blocks of ice as big as small buildings showed that despite it size it could deliver destruction at any time. I now understood its bipolar character. Our side was a huge snow cone, the other side a nasty mix of crevasses, ice cliffs and steep fluted chutes and a knife edge ridge. 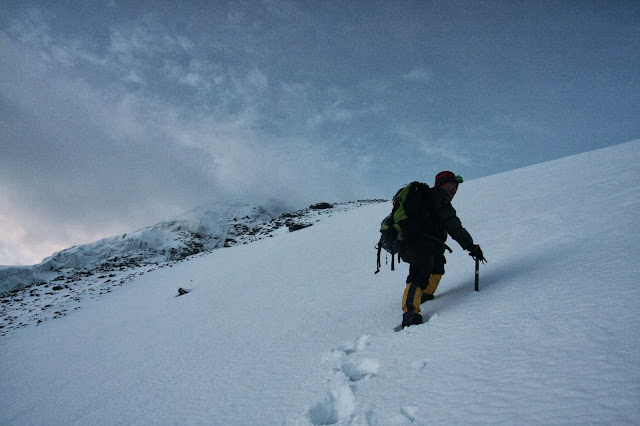 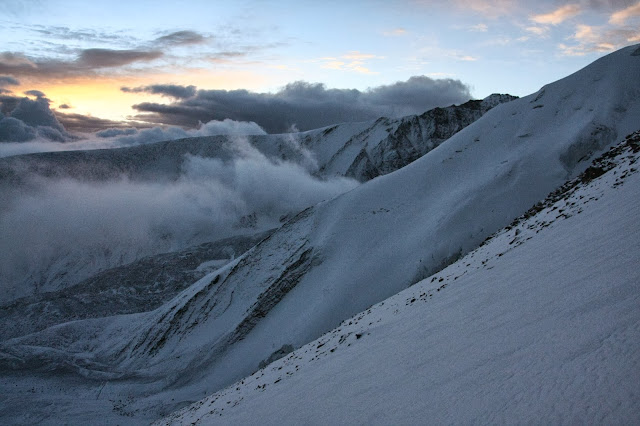 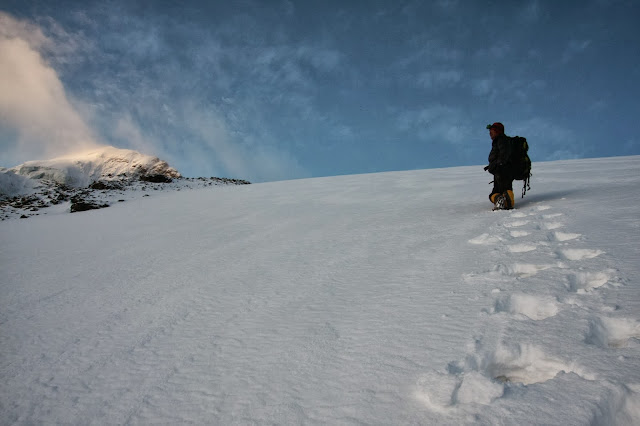 Once the crampons were on my boots the ascent began. The snow seemed innocent enough at first. Just a big climb up the snow. Nima broke the ground, but I soon found the snow was so loose and fluffy that following steps did not amount to much ease. Every step collapsed and the climbing began to seem very hard indeed. I had thought I would be going up hard pack snow like on Island Peak. Normally this route looks like this (on the YouTube clips I had seen). Hard snow, just a big hill to climb in crampons. Perhaps a bit like when Steve Gottschling and I went up Ngaurahoe, (North Island New Zealand, in a raging blizzard) in 2011. Hard snow, that crampons bite into. Not this sugary, loose junk. 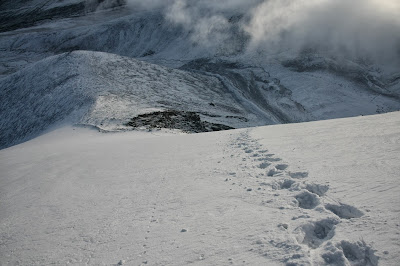 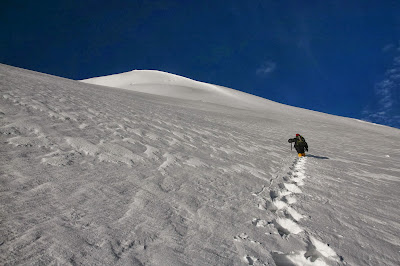 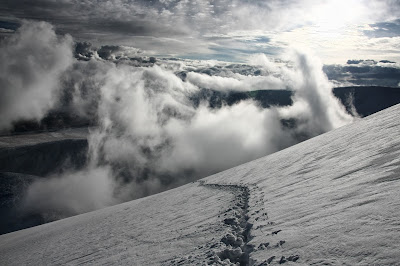 Nima looked like he was climbing into space, the sky was a dark blue in this high atmosphere. And the cone of snow loomed higher , and slowly the slope became steeper. The mountain appeared to have no end to its heights. There were times when I had to stop short of Nima by only a few steps, to regain my breath and energy. But we pressed on, his Nepalese doggedness to climb ever upward amazed me. These people really are made in the mountains! At least the views were astounding, so at any rest stop I had time to shoot photos and drink in the amazing views. 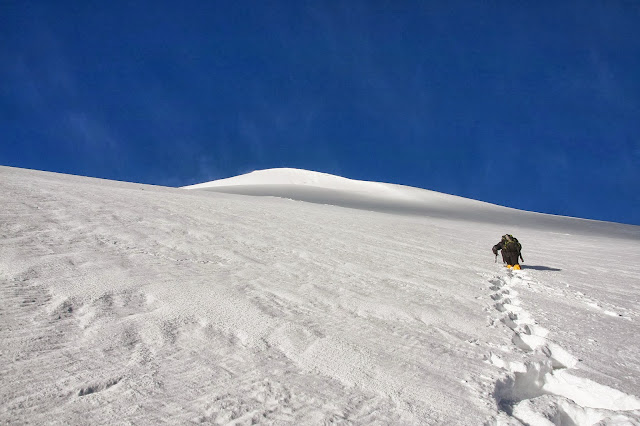 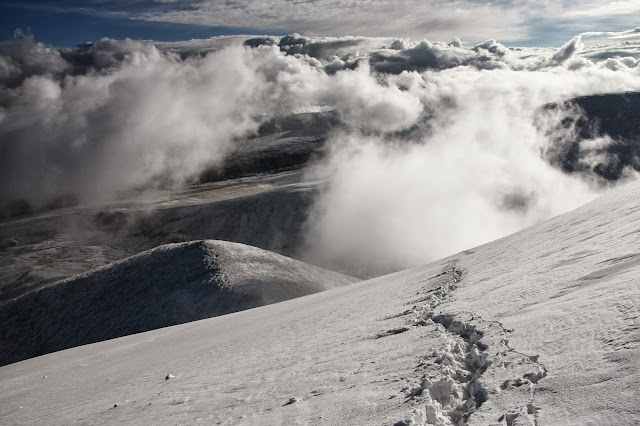 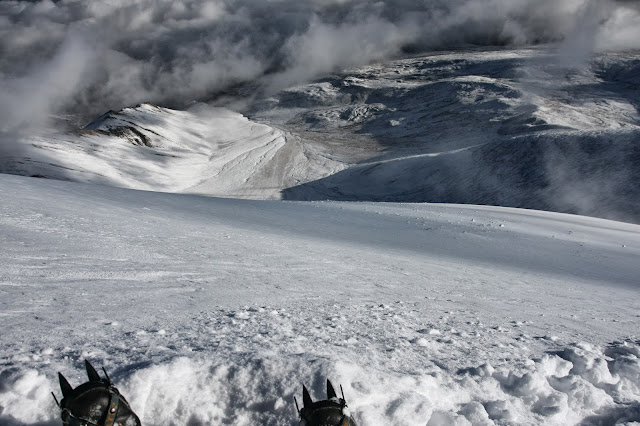 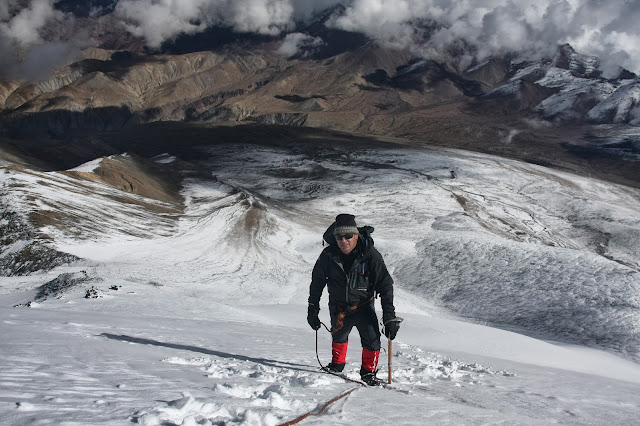 Slowly we neared what appeared to be an increase in the steep slope. Then we started following the edge of the cornice that led to the summit ridge. Nima had said that this section would be steeper. Understatement!

As we inched our way up the steep section, suddenly I heard a surreal “whooomph!”. Deep and bassy, I have never heard such a sound. I looked to my left and saw a 20m crack zigzagging its way toward the cornice line. I didn’t think to take a photo. I just stood there wondering if anything else was going to happen. Nima calmly said, “The new snow, it causes avalanche”.

“Good to know” I thought…

The slow progress was my fault I’m sure, as Nima would just push (seemingly effortlessly) upwards. I struggled along behind him, often taking 3 steps before bending over my ice axe gasping. Then with a grunt and groan, I would try and manage a few more steps. It was heartbreaking work, the snow never had any structure, the ice axe would plunge in and not grip anything. Sometimes the snow seemed wet in appearance, and the ice axe made a metallic squeak as it went in. It would give some hold then, but mostly it was just soft and powdery. Great for skiing and snowshoeing. Not for crampons and axes. 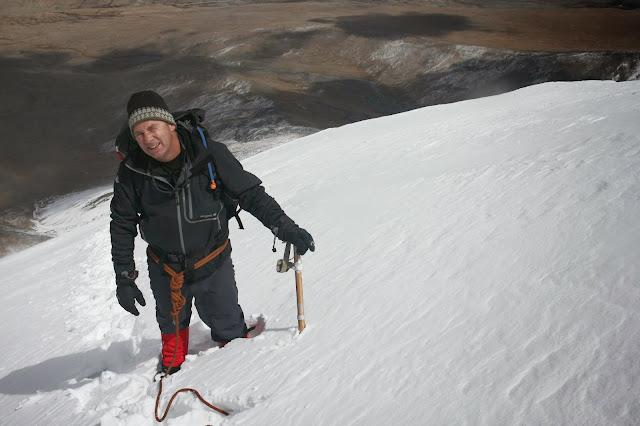 Finally at about 11.30am it looked like we were near the top of the endless slope, yet I felt I had reached my limit of energy. After all I still had to make it down. We had been climbing since 1.30am. I suggested to Nima that we were high enough. After all the true summit of KY 1 was not our goal.

The second summit is more of a ridge point, although it still has a highest point on a rocky bluff. We were literally at the most, about 60m below that, at 6140m.

The views were fantastic. At that point I felt happy, well above my goal of 6000m and with amazing views. I went over to look at KY1s summit, near the cornice line. Just as I approached it, about 10m away a large section broke off and tumbled into the abyss below. I took the hint and stepped back from the cornice after that!!

We ate some lunch. Well what I could eat of it, since I was almost too exhaused to eat anything. Then photos were taken of the amazing vistas across the Markha Valley, Stok Range and Zanskar Mountains. My prayer flags meant for the summit cairn were laid to rest in the snows. The mountain had given us a pardon and allowed a climb, although Nima confirmed that “normally people don’t climb here in such deep fresh snow”. Yep.... I had that figured for sure! 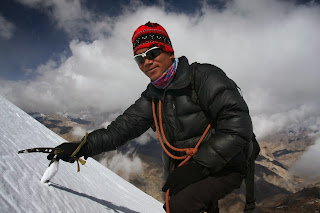 But the mountain had also given me a few signs that it held the aces. Even a “trekking peak “ deserves respect once it becomes a 6000 m one.

Our descent was uneventful, but mesmerizing (perhaps it was the thin air). Snowballs of all shapes and sizes, dislodged by our boots would hurtle down the steep slope, gaining speed , breaking into two or having erratic paths if they were oddly shaped. It kept me amused on the long walk down anyway. 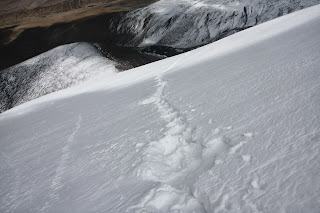 To save some time I glissaded (slide on my bum) for about 50m past the crampon point. It must be the skier in me, but why put up with the hassle of snow over loose rock when you can go down a smooth slope of virgin snow? 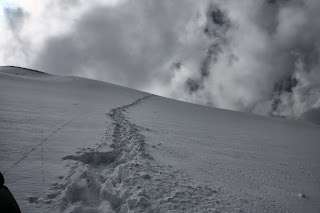 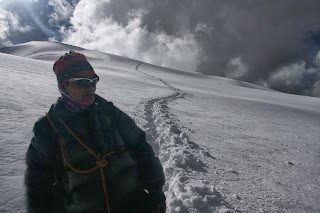 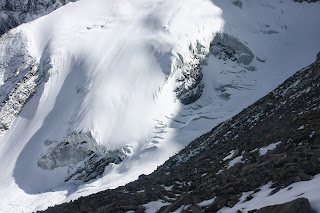 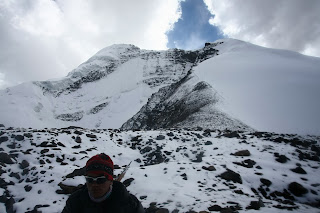 Namgyal had thoughtfully sent one of the kitchen boys up with juice and biscuits, 300m above the camp (in sneakers). What a welcome sight he was, although when he offered to carry my backpack I declined. I would rather he carried me!

By 4.30pm we were back at base camp. A 15 hour odyssey. And now I have six times two. Two peaks I have climbed over 6000m. Perhaps now it is time to think about going up a number. To lucky 7?

Now I play it all over in my mind like some mental case. Did I have enough to keep going? Should I have rested and then gone for the summit? We had enough time, we could have come down with torches if need be. Was it too dangerous?

I am not unhappy. I just dont deal well with ‘unfinished business’(see my other blogs!)

But I won't do Kang Yatze again, no need.

It was fun and amazing.

But what ever becomes my “next time”, I will remember that I don’t like to leave things incomplete. At least I have something to work towards….

I enjoyed your page - and also page on Kun. You clearly have the high altitude bug now and I hope you get your 7000er.

Welcome to SummitPost - I am hope we will be hearing more from you!

Thank you! Im updating my Kun trip report from July last year on the Mountains and Rocks section. Still under construction...Good to have a website like this, a great resource.

Awesome images! I went there 2 weeks ago on August 29, but I was only equipped with a phone as far as pictures go. I second the happy place :) There isn't a page for Kang Yatze 2 right? I left my log on Kang Yatze even though it's not quite the same thing!

HI , Sorry for the very late reply. KY 1 and 2 are part of the same mountain. Sometimes the posts called Kang Yatze refer to the 'trekking peak' side. The real true summit is climbed far less frequently. So it could be that the page called Kang Yatze is actually referring to the trekking peak....