Kauai is the oldest and westernmost in the main chain of the Hawaiian Islands. Its colorful nickname, the Garden Isle, describes the lush vegetation that blankets the island, attracting tourists in droves to view it in its finery. The island is dominated by the summit of Waialeale, an extinct volcano rising more than 5,000ft in the center of Kauai, now slowly eroding back to the sea. The eroding material, famously known as Kauai's Red Dirt, is rich in minerals to support the overriding vegetation. Abundant rainfall fuels both the erosion and the lush vegetation, creating a tropical jungle paradise like nowhere else in the United States. 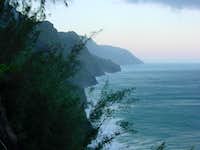 While great for the flora, all that rain does not bode well for mountain climbing and hiking. Fortunately, like all of the Hawaiian Islands, Kauai has its rainy side and its drier side. Waimea Canyon, often referred to as the Grand Canyon of the Pacific, is located on the drier south side, offering more than a hundred miles of trails in a grandly scenic setting. A high plateau area known as the Alakai Swamp separates the north and south sides of the island in a broad area west of Mt. Waialeale. This land is almost continually enveloped by clouds, rarely seeing the sun, and is home to almost all of Kauai's remaining endemic species. The west coast of the island features the popular Kalalau Trail, a centuries old path that highlights the rugged beauty of where the sea meets steep canyon walls.

With few exceptions, most of Kauai's peaks are nearly inaccessible. Sleeping Giant, on the east side of Kauai overlooking the small town of Wailua, is the only notable peak with a trail reaching its summit. All of the others, including the dominant Mt. Waialeale, require a good deal of cross-country travel, bushwhacking, and perseverance. In addition to the wonderful views, the intrepid summitter will be blessed with all the solitude one could desire in paradise.

Mt. Waialeale is the general name for the massive volcano that originally built up the island of Kauai. Ancient Hawaiians used to scale the mountain periodically from the east to visit a stone altar, or Heiau. It is believed no one has scaled the peak from that side in more than 100 years due to erosion that wiped out a portion of the steep ridge route. The USGS built a trail from the west side to a rain gage that sits atop Waialeale, but that trail has mostly been reclaimed by the vegetation. Most visitors to Waialeale in modern times arrive by helicopter, but a few intrepid souls have made the trek on foot over the old route.

Kawaikini is the actual highpoint of the island, a mile south of Waialeale. As the highpoint of Kauai County, it is of interest to County Highpointers, and is considered the most difficult US county highpoint outside of Alaska. A trek to Kawaikini or Waialeale is a strenuous undertaking of more than 30 miles RT, all of it in the Alakai Swamp, much of it marked only by tags or not at all.

Kapoki is the highpoint of the ancient crater from which Mt. Waialeale rose. Nowadays the crater is barely discernable and Kapoki is a minor landmark on the trek to Mt. Waialeale or Kawaikini. Overrun with vegetation in the middle of the Alakai Swamp, there are no views to be had from the summit. A GPS is a must.

Haupu is the highest of the named peaks in the small range found on the southeast side of the island. Though the summit is on public land, it is surrounded by private property on all sides. It is a striking summit viewed from Lihue to the northeast or Poipu to the southwest, and there is no trail and no easy way up. It sees very few human visitors.

Sleeping Giant is the most accessible peak on Kauai, and one of the easiest to reach. Located near the town of Wailua on the east side, it has three trails reaching the summit from different sides.

Kalalea Mountain is located on the northeast side of the mountain near the town of Anahola. It is often referred to as King Kong's Profile or simply King Kong due the resemblence to that fictional giant. A nearby feature, unimaginatively called Hole-in-the-Mountain refers to a window in the ridge that can be viewed from certain angles. The opening used to be larger until a landslide in the 1980s closed up most of it. The peak can be accessed from nearby Hokualele Rd.

Mt. Namahana is in the interior of the northeast portion of Kauai at the junction of the Moloaa, Halelea, and Kealla Forest Reserves. No information on reaching this peak is available.

Namolokama Mountain is the highpoint of a high plateau in the interior of the north side of Kauai. 3,000-foot cliffs surround the plateau region on all sides. No information on reaching this peak is available. It is possibly the most difficult peak on Kauai to summit.

Laau Ridge, also located in the interior on the north side, is a long, difficult ridgeline separating the drainages of the Wainiha and Lumahai rivers. No information on reaching this peak is available.

Kapalaoa is located in the interior on the south side, a highpoint along the ridge extending southward from Kawaikini. No information on reaching this peak is available.

Laauhihaihai & Kahili are two lower peaks along the same ridge south of Kapalaoa. They can be accessed via a trail starting from Kahili Mountain Park (follow the road through the private school/park and access the trail at the green water tank). The trail is fairly good to Laauhihaihai, but gets progressively thinner on the way to Kahili. The last quarter mile to the summit is a spicy bushwhack up extremely steep slopes. The trail is on private property - seek permission to use the trail from the office building
along the road on the drive in.

There are many other named summits on the island, many as subsidiaries of those listed above. Many lie on private property, and should not be scaled without permission from the landowner(s). 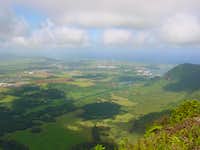 Almost all visitors arrive in Kauai through the Lihue airport on the east side of the islands. Most flights arrive from nearby Honolulu on the island of Oahu, but there are some direct flights from San Francisco and Los Angeles. Cruise ships also arrive at port in Lihue, but rarely provide the time visitors need to get off the tourist tracks.

Once in Lihue, you will likely need a rental car to make your way around the island. All the major rental companies have offices in Lihue. If you plan to drive off the paved roads, the money will be well-spent to secure a 4WD vehicle. Dirt roads, used to access some of the more remote areas of the island, are often rutted and muddy. 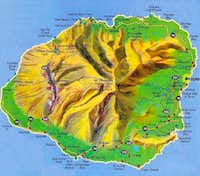 Navigating around Kauai isn't very complicated. Good highways along the coast nearly encircle the whole island. Only the stretch known as the Napali Coast on the northwest side is not serviced by roadway. Highway 56 runs north out of Lihue to the town of Princeville on the north side. From Princeville, the narrow, windy Kuhio Rd (route 560) goes the remaining fifteen miles west to Kee Beach and the start of the Napali Coast. Running south from Lihue is highway 50, extending to the western most part of Kauai at the Pacific Missile Range Facility.

Waimea Canyon and Kokee State Park are reached via route 550 out of Waimea or route 55 in Kekaha. There are no auto services anywhere along routes 55 and 550, so be sure you have sufficient gas for the drive.

Poipu is reached off Highway 50 via either route 520 or 530. From Poipu you can drive east on Weliweli Rd to Kawailoa Bay (part of the route is private property and access is permitted only during daylight hours) to access the south side of Haupu and the subsidiary peaks on that side.

Weather on Kauai is probably the biggest factor in planning any outdoor activity on the island. Most of the weather comes down as rain, with the rest falling as heavy rain. If you spend any significant time on the island, you will come to find that the rainfall is highly variable depending on where you are. The rainiest spot is at the summit of Mt. Waialeale, averaging almost 300 inches per year - that amounts to almost an inch per day on average. The driest area on the southwest coast averages barely 25 inches per year. Between these two extremes is a good deal of variability.

The good news is that most of the rain falls lightly and for brief periods, while temperatures rarely drop below 60F except at the highest elevations above 4,000ft. It is always raining somewhere on Kauai and Mt. Waialeale is rarely visible through its ever-present cloud cover. Some amount of precipitation is likely to fall on most outings, but hardly enough to cause more than a minor inconvenience. If you plan for rain with at least a lightweight rain jacket, you should rarely have to cancel your outing.

It's always a good idea to check the weather before making serious plans (such as an adventure in Waimea Canyon or the Alakai Swamp). It is also a good idea to monitor the rain & streamflow gages if going someplace requiring a stream crossing either in your vehicle or on foot.