Kings Peak Day Tripping on the Fourth of July

Bark Eater
Add photos See all photos
Question: What do a parole officer from Colorado, a post-doc from California, and a middle-aged research manager from Delaware have in common? Answer: A love of the mountains and a sense of adventure. Thus, Andy, Nate, and Frank rendezvoused at the Wagon Wheel Motel in the metropolis of Fort Bridger, Wyoming on the 3rd of July. Our objective: a single day holiday assault on Kings Peak, the highest point in Utah via the Henry’s Fork Approach. Kings is in the middle of the High Uintas Wilderness. There are no short approaches. Ours was the “shortest” route at about 29 miles round trip.

We were up at 2:30 AM and out of the motel by three. Our fifty minute drive to the Henry’s Fork trailhead was filled with anticipation. The trailhead is at 9400 ft. elevation. The parking area was well populated with vehicles but not overflowing. No one else was stirring. We were on the trail by 4 AM, headlamps blazing. I wore gloves for the first couple of hours of the hike…chilly start!

We made great time up the early, relatively flat part of the trail. It was light enough by 5:15 or so to stow the artificial light. We arrived at the first way point, Elkhorn Crossing, just after 6. We moved up steadily through the Henry’s Fork basin, enjoying occasional views of moose and constant views of the mountains, coming closer step by step. The early light on the peaks gave us ample opportunity for numerous photo stops. 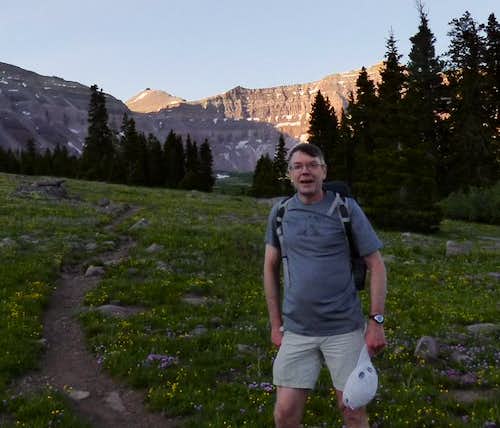 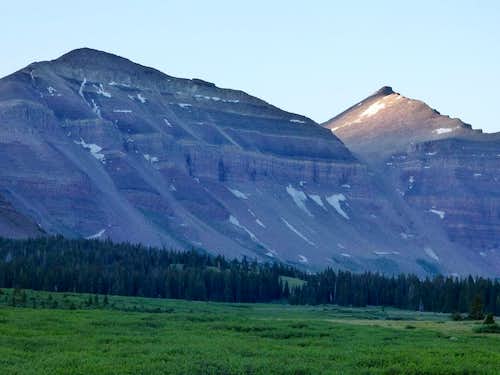 Just before climbing Gunsight Pass (11,800 ft.) we encountered a lone backpacker. He had attempted to summit the previous day, but turned around due to storms. We reached the summit of the pass a bit after 8 AM, a little more than 4 hours after leaving the car.

The route advice had us take a short cut traversing along the south side of West Gunsight Peak from the pass, rather than following the established trail down into the Painter Basin. Well, we blew it. Assumed the traverse would start roughly same elevation as the pass and then climb. We attempted this route and quickly encountered a talus field full of car-sized boulders. Quickly turned around, dropped down, regained the trail, and descended into the Painter Basin. In retrospect the short cut must climb directly up out of the pass until one gains flatter ground above the talus field and cliff band on the south side of the mountain.

The herd path we wound up following was down on the flats and just down slope from the talus field. Though we were well above tree line, flowing water was very frequent due to snow melt still occurring. We crossed a couple of small snow fields that did not impede our progress. Eventually we crossed a more sizable creek and rejoined the “official” trail climbing from Painter Basin up to Anderson Pass. After a bit of a climb we entered a very flat, high, table land. The trail was indeterminate at times, but we could see roughly where we had to go. The Uinta Mountains are characterized by large, flat, alpine expanses surrounding some very steep mountains. Unique geography! 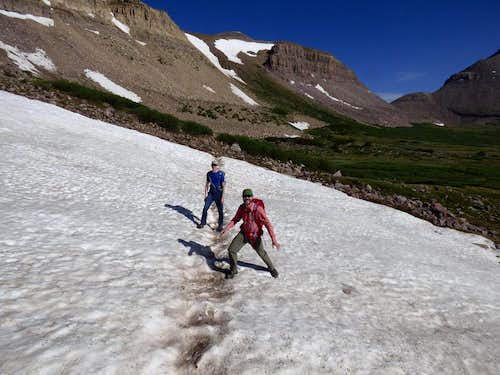 What we originally assumed was Anderson Pass turned out to be a lower saddle (12,400 ft.) that was at the top of the chute coming out of the Henry’s Fork Basin. We could see the steep climb up Kings Peak to our left. Moving left, we climbed up to the true Anderson Pass at 12,800 ft. At this point, we were 6.5 hours and 13-14 miles in. We had our second human encounter of the day. The climb up to the peak from the pass was a Class 2 scramble up about 700 feet through some fairly large talus. On fresh legs it would be no big deal. After so many miles and tired legs, it was a challenge! Nate got a bit ahead of us and was enjoying the summit (13,528 ft.) as Andy and I arrived at about 11:30 AM. 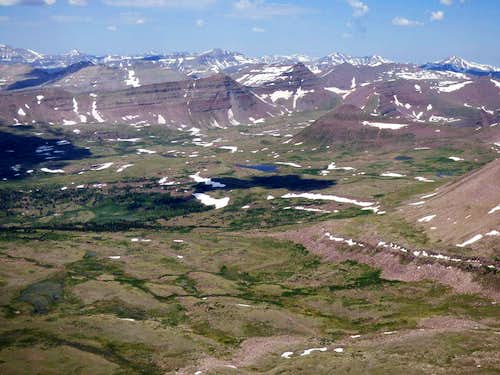 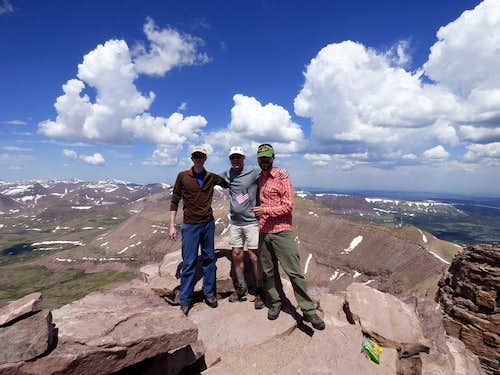 We had two other solo hikers summit during our brief visit to the top. The views were great with light winds and temperatures in the mid-50’s F. But we could see trouble brewing. The thunderheads were building, only 10-20 miles away. We limited our summit time to about 20 minutes and prepared to descend.

I made my way very cautiously down the talus slope. As I get older, I find that my balance gets significantly worse when I get tired. I think I finally need to invest in a pair of trekking poles. By the time we got back to Anderson Pass we could hear thunder in the distance. I was surprised to see a couple of parties still heading up towards the summit.

Consider the weather and at this point my tired legs for scrambling, we opted for the known yet longer route back through the Painter Basin. A good little thunderstorm kicked up at this point. We got a little rain and sleet and a lot of lightning. I was glad we didn’t take the ridge route back over. We stopped to filter some water at a streamlet and refill bottles and Camelbaks.

We climbed back up to Gunsight Pass, not pausing at the top because there was still some lightning. At this point it was about 3 PM. We figured four more hours to make it to the car. That was pretty accurate.

Once we got down off of the pass the exercise became quite simple. The ground flattens out tremendously and it’s pretty much just putting one foot in front of the other. Everyone was pretty tired but we made steady progress back to the north. We did encounter a fair number of backpackers heading in for the holiday weekend. We tried to be helpful in answering questions where we could.

We arrived back at the trailhead at 7:10 PM, 15 hours, 10 minutes, and 29 miles after we started. Certainly not a “set the world on fire” pace, but we were all proud of what we accomplished in a day. By 8 PM we were seated in the “Crazy Ates” Restaurant in Mountain View, enjoying large cuts of prime rib and enormous slabs of ribs. This was the #36 state highpoint for Nate and #37 for me, so we celebrated!   I was unaware if there were fireworks later in Fort Bridger…I slept soundly that night!

Pre-hike advice: 1) “Your crazy, it’s too long, do it as a backpack.” Response: Yes, very long day but I’d do it again.
2) “It will be very crowded on a holiday weekend”. Response: Including our party, we counted a grand total of 13 people making summit attempts on the 4th of July.
3) “The mosquitoes will eat you alive in early July”. Response: Barely noticeable. If you want to see eaten alive, come to the Adirondacks in June.
4) “Summit early, it storms almost every summer afternoon in the Uintas”. Response: Sage advice.

From Gunsight Pass, there is a faint path that goes almost level for about 1/4 mile on the east side of 13103, then it is a moderate scramble up to the top of the plateau.

Thanks, ZeeJay. We looked for it. I know we were too far down when we cut over. Great country! Enjoyed it immensely even with the longer route. And with the thunderstorms it was better to be lower later in the day anyway.

It was nice hiking with you Bark Eater! A good long day with wholesome exhaustion. Thanks for writing a nice detailed report. Will see you again on the trail hopefully soon.

Awesome trip, Nate. Rendesvous for Gannett next summer...though you may see me before!

Thanks, Catamount. We definitely had a sweet spot with the weather!

Re: Another State High Point Falls

Thanks, Jim. Hope to hike with you again soon!

way to go guys! couple of us are headed up that way in a few weeks.. will remember the bit about "summit early".. LOL love your comment about bugs.. so true!

Thanks, DK. Please let us know how you make out. It is an amazing area...vast, beautiful, and remote. Hopefully I will have the opportunity to go back and further explore in the not too distant future.