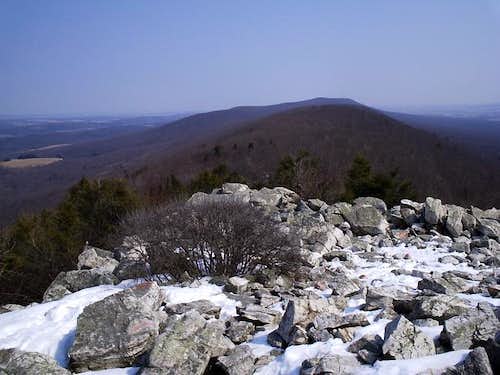 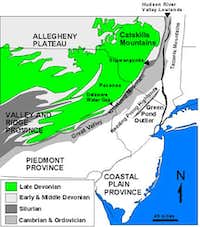 The Kittatinny Mountains are an extension of the Ridge and Valley Province of the Appalachian Mountains that stretch from near the Hudson River in New York to South Central Pennsylvania. To the West of the Ridge is what is known as the Allegheny Plateau, and looking East from the ridge is the "Great Valley". The name Kittatinny in the Lenni Lenape language means "endless mountains" or "Great Mountain". This ridge is the farthest north and also forms the eastern edge of the Ridge and Valley Province.

The name Kittatinny most commonly refers to the part in New Jersey, from the Delaware Water Gap to just north of High Point. In Pennsylvania, the ridge is mainly known as Blue Mountain. In New York, the Ridge is known as the Shawangunk Ridge. The Appalachian Trail runs almost the entire length of the Kittatinny Ridge. There are many opportunities for loop hikes all along the ridge using the A.T. All of the land on Kittatinny Ridge and a good amount of the surrounding land is owned by various state and federal agencies.

Humans have lived in the Kittatinny area since about 8000 B.C. There is at least one identified archeological site that proves it. The local Indians that lived in the area were the Minsi branch of the Lenni Lanape or "Delaware" Indians. They spoke the Algonquin language. Europeans, mostly Dutch, first came to the area in around 1650 which was about 100 years after most of the Indians had left the area. The Dutch built many copper mines in the hills, none of which were profitable. From the time preceding the Revolutionary War to recently the biggest industry was farming. Logging was a big industry in the 1800's.

These formations are the remnants of an ancient fold-and-thrust belt, west of the mountain core that formed in the Alleghenian orogeny. The strata have been folded westward, and forced over massive thrust faults; there is little metamorphism and no igneous intrusion. The ridges represent the edges of the erosion-resistant strata, and the valleys portray the absence of the more erodible strata. Smaller streams have developed their valleys following the lines of the more easily eroded strata. But a few major rivers, such as the Delaware River, the Susquehanna River, and the Potomac River are evidently older than the present mountains, having cut water gaps that are perpendicular to hard strata ridges.

The evidence point to a wearing down of the entire region (the original mountains) to a low level with little relief, so that major rivers were flowing in unconsolidated sediments that were unaffected by the underlying rock structure. Then the region was uplifted slowly enough that the rivers were able to maintain their course, cutting through the ridges as they developed.

Four of Pennsylvania's major rivers cut through the ridge.

The Delaware River, which forms Pennsylvania's eastern border with New Jersey, passes through the ridge just southeast of Stroudsburg.

The Lehigh River, which feeds the Delaware at Easton, passes through the ridge near Palmerton.

The Schuylkill River, which feeds the Delaware at Philadelphia, passes through the ridge just north of Hamburg.

The Susquehanna River, which feeds the Chesapeake Bay, passes through the ridge just north of Harrisburg, Pennsylvania's capital.

This page was originally created and started by RobA. Credit is due to him for getting things rolling. Hopefully I can continue to make this page what it is meant to be and what Rob wanted it to be.