Krakatau just exploded again which completely changed the volcano and its appearence.   Here is one video:

I will try to post updates when I find them.

I will never forget Christmas Night 2010. It is the night that we camped on Sertung Island across the bay from Anak Krakatau. So my journal reads:

Wow! How can I possibly describe what we saw and experienced? This place was the single most spectacular natural scene that I have ever experienced. We (Kimberly, Kessler, Shaylee, my dad and I) left Christmas morning for Anak Krakatau under perfect weather. I had to take motion sickness pills because the only way to get there was by boat, but riding the motorboat was much easier on me that riding a ferry or big ship.

Explosions from Krakatau could be heard from a long way away. First, we boated to Rakata Island (part of the old caldera) and did some snorkeling (seeing many tropical fish), but my dad ended up losing his watch in the ocean.

After snorkeling at Rakata Island, we got in the boat and rounded the bend to see the spectacular erupting Anak Krakatau which was exploding quite loudly. Obviously climbing the peak was out of the question! We headed to Sertang Island in order to see the explosions which were amazing to watch. After camp was set up my dad and I hike the beach in both directions as far as we could. We made it quite a ways, but were eventually cliffed out in both directions. There were some crabs to see and the beach was nice.

We thought the day eruptions of Anak Krakatau were spectacular, but then night came. It was incredible and lava bombs would explode and make it all the way to the ocean without hitting the ground! Using the known height of the volcano, I estimated that the big eruptions were shooting glowing lava 1000-1300 feet into the air (~300-400m) above the top of the volcano, setting the entire volcano aglow with red hot lava. It was an incredible scene and very noisy. I’ve never seen such a spectacular natural scene and we all agreed on this. No man-made fireworks show could possibly compete with this!

It was very warm at night and Kessler, my dad and I slept under the stars in order to see more of the volcano. We didn’t get much sleep with all the spectacular fireworks and noisy explosions going off.

In the morning we were greeted by two giant monitor lizards (they must float to the island on driftwood unless they can swim this far?). After taking some more photographs we packed up and headed back to Rakata Island for some more snorkeling. We even found my dad’s watch and one of the boat operators was able to dive down and get it (maybe under 13 feet/4m of water?). Amazingly it still worked.

After snorkeling we headed back to Carita on the island of Java. Anak Krakatau sure was a spectacular trip indeed! 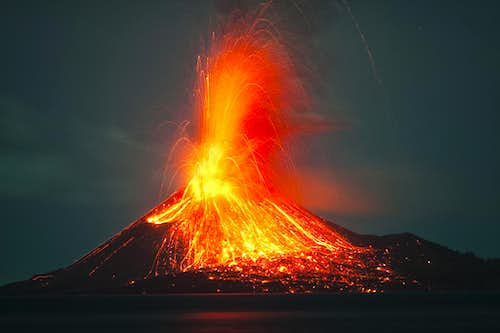 Anak Krakatau eruption July 2 2009. Tom Pfeiffer, www.volcanoediscovery.com, used with permission. We saw the same scene while camping there overnight on December 25 2010, but our night photos didn't turn out as well.

It seems that everyone in the world has heard of Krakatau (often incorrectly known as Krakatoa), but few know of its actually location. Krakatau is located about 30 miles/50 kms west of the island of Java in Indonesia.

The volcano quite literally blew up on August 26 and 27 1883, turning day into night and killing tens of thousands of people from the resultant tsunami.

Three much smaller islands (Sertung, Panjang and Rakata) are what remains of the Pre-Historic Krakatau. After the explosion, Anak Krakatau (Child of Krakatau) started growing from the bottom of the sea and finally broke the surface of the ocean in 1927 and 1928. In 2012 Anak Krakatau is currently ~1142 feet/348 meters high and growing at a rate of 6.8 meters per year (see the History section below). The highest point on the remnant islands of Krakatau is 2733 feet/833 meters on Rakata island. 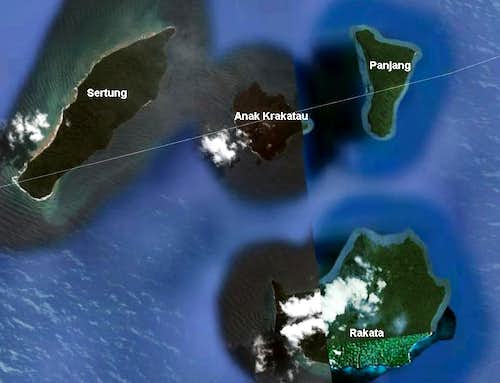 Krakatau as it appears today. Google Earth image. Island names were added by me.

Krakatau has a very violent and explosive pre-history and history. Before 535 AD (dated from geological studies and ancient religious writings), Krakatau was an estimated 6562+ feet/2000+ meters high before it erupted catastrophically. Later Rakata Island became active as did two smaller volcanoes located where Anak Krakatau is today. Later they merged to form an island 6X 3 miles/9 X 5 kms. At least seven other eruptions occurred between 830 AD and 1530 AD.

On August 26-27 1883, Krakatau once again erupted catastrophically. The explosion was so loud that it was heard as far away as Sri Lanka and South Australia. Tens of thousands of people lost their lives in the initial nuée ardent and tsunami. The tsunami was so powerful that it was recorded around the world and even registered in the English Channel. Official death counts were at 36,417, but it is likely that many more times died. An estimated 120,000-150,000 deaths actually occurred and at least 132 villages were wiped off the face of the earth and another 132 partially so. Human skeletons washed ashore floating atop pumice at East Africa over a year later.

The 1883 eruption of Krakatau was also the first global media even due to the newly completed global telegraph network.

Although Krakatau has had some quiet periods, it has been very active since 1883. Anak Krakatau rose above the water at the end of 1927 (some sources say August 12 1928, but it was reported above water before then), but and continues to grow at a rate of about 6.8 meters per year.

Here is a brief history of the elevation of Pre-Eruption Krakatau/Anak Krakatau. The 535 and 2012 elevations are estimates. Anak Krakatau is currently growing at the rate of about 6.8 meters per year!

Before visiting, make sure to check the Monthly Reports from the Global Volcanism Porgram. The website more or less stays pretty up to date. 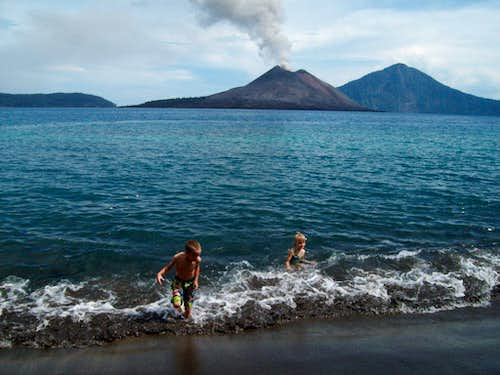 The only way to get to Krakatau is by boat, usually from Carita (Java). It is also highly recommended that you join a reliable guiding service as well. Be aware that some budget tour boats available might not be in good condition. I’d highly recommend an overnight trip which will be far superior to a night trip.

I can’t speak highly enough for Krakatau Tour. Their service was excellent and the experience was awesome. The can pick you up in Jakarta or Carita.

In Carita, they also recommend the service from Rakata Hotel which also sells tours.

Wanawisata-Alamhayati is based out of Jakarta and is also highly recommended though perhaps a bit more expensive, though they will pick you up from Jakarta.

To get to Carita on your own, take a bus to Labuan and then an angkot (public transportation car) to Carita. When traffic is favorable this can be done in four hours.

Carita itself is a nice place to spend some time. We only planned to pass on through, but stayed longer than expected due to the beaches and great hiking in the Hutan Wisata Forest Reserve (including nice waterfalls). For those with more time, Ujung Kulon National Park is a must see.

Krakatau can also be accessed by boat from Sumatra, and although less popular than coming from Carita on Java, it’s actually slightly closer and slightly cheaper. In Kalianda, stop at the Hotel Beringin or on weekeneds to the Canti Harbor to arrange a tour.

The area around Kalianda is known for beautiful white sand beaches without any crowds. 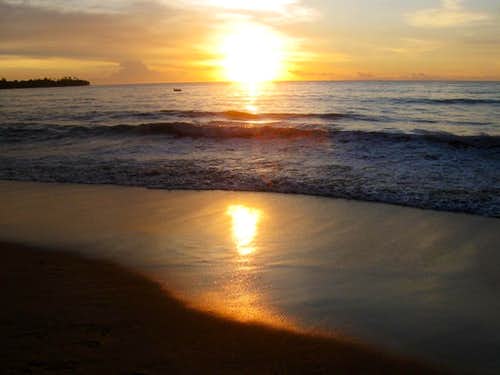 This is the sunset on Christmas Eve at Carita on the West Coast of Java. It is also the most popular starting point for the adventure to the Krakatau Volcano.

Climbing Anak Krakatau is currently out of the question. Visitors are supposed to stay at least 2 miles/3kms away from the volcano, and for very good reason. Your tour operator should take care of the details. You may still visit the nearby islands except for when there are special alerts (the volcano is heavily monitored).

Climbing the volcano used to require a climbing permit from the Forestry Department in Labuan, but climbing Anak Krakatau has been impossible in recent years. 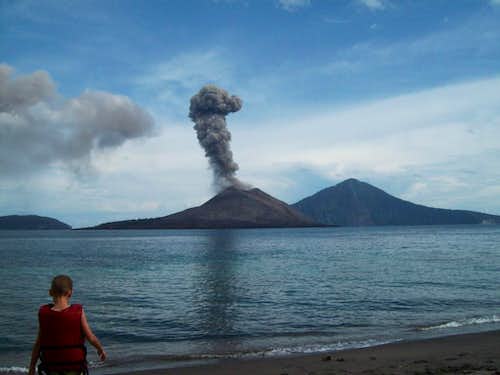 Krakatau explodes after getting off the boat at Sertung Island. Because of volcanic activity, you are not currently allowed to land on Anak Krakatau Island.

If conditions allow it, definitely camp on Sertung Island (see the map above). Assuming Krakatau is still active on your visit, a small but nice beach on the east side of the island provides your front row seat to the best fireworks show in the world.

This area is very warm, so forget about needing a sleeping bag. Bring a light sheet for possible bugs (only a very few are present) and prepare for a warm night. 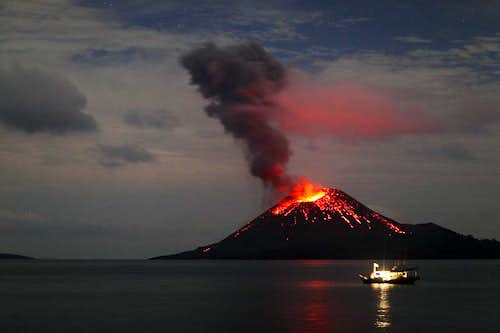 This is Krakatau at night. Make sure to camp on a nearby island so as to see the volcano at night.

May through October is the dry season and considered the best time for a visit (July through September are the driest of all the months). Visiting during the wet season is also possible, but there is a greater chance of rain and the ocean is rougher. Good or bad weather can come at any time and we actually had beautiful weather in late December. 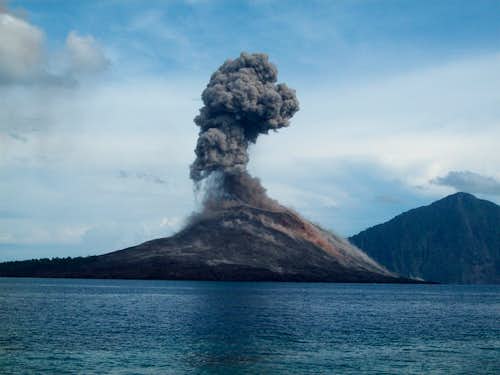 Exploding Krakatau as seen on December 25 2010.

Weather averages are below for Jakarta, which is east of Krakatau. Jakarta and Krakatau have similar climates. Information is from the book World Weather Guide, page 241.