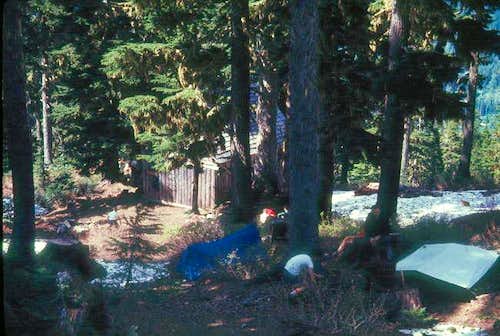 The first time I saw the Kulshan Cabin was in 1968, I think. I was part of a Seattle Mountaineer's trip climbing my first Volcano, Mt. Baker, via the Coleman/Demming Glaciers. I was finishing my "Basic Climbing Course" at 15 years old with my brother and sister who were also on this climb. This is the only picture I have passing the Cabin that day. You were more selective of the pictures you took with a 35mm camera then and lived with what you got. Any way, I have the one picture and glad to have it. The Cabin was full of climbers and every space nearby was taken by tents and tarps. So we hoofed it past some distance and set up our green "tube tents" in the trees. We didn't know any thing about the current camps on Hog's Back or higher near the Black Buttes. I think the entire group of Mountaineers summited the next day with ideal weather. Quite a thrill for me that I never forgot.

My Interest in the Cabin 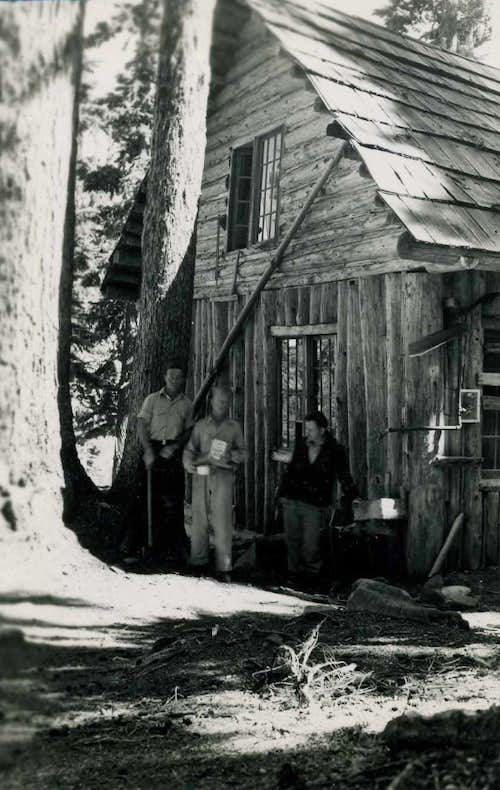 My interest in the Kulshan Cabin surfaced when I became owner of my Uncle's black and white collection of Pacific Northwest mountaineering and arial photos.(Now contributed to the WWU Archives and Records Center, Western Washington University, Bellingham, WA). I found this photo of him in front of the original Cabin, dated 1946. Grant is the man on the far left of the photo holding what looks like an axe for chopping fire wood. He was a WWII pilot for the Marine Corp, climbed some before and after the war, including Mt. Baker. He wrote me once about his climbing, "In all our climbing years, we never shared a summit with another party. On three day climbs, Glacier Peak and Mt. Baker, we saw no one the whole time. We hiked across the Olympics and back, seeing only one man the whole time" I still have his letter. Amazing, right? Any way, the group I climb with now summit Baker regularly and have wondered about the history of the Kulshan Cabin. Why it was built where is was, when, and now why it's gone, only a flat spot near the trail if you know where to look? So here goes my efforts to share some history from the Mt Baker area and the Kulshan Cabin.

The First Cabin was completed in October, 1925. It was financed and built by the Mt Baker Club. The original pre-war plan was to build a stone building with six sleeping rooms, a large living room and two fireplaces! However, WWI and financing the Mount Baker Marathons proved overwhelming to the Mt Baker Club's finances. So, the log structure in this photo and my Uncles'photo was chosen(ref. "Koma Kulshan, by John C Miles). At this time, the closest road was nine miles from the Cabin's location at Glacier. That made the location practical for mountaineers and hiking parties to enjoy a comforable place to spend a night or two in their wilderness trips. It was not until the late 1940s when demand for lumber in the post WWII era that roads began to push farther into the wilderness. The road we now easily access to climb Baker from the west side (North Ridge, Coleman Headwall, Coleman/Deming Roman Wall) was intially built for logging interests. The original cabin fell to neglect. So, in 1951, the Mount Baker Club and Western Washington State College, who jointly maintained the cabin at the time, decided to remove and rebuild the 2nd cabin. This cabin also was neglected and removed by the Forest Service some time in the 1980s. I guess the area was designated as "wilderness" and came under different rules. Also, the proximity of the trailhead to the summit and little motivation to preserve the cabin by anyone also contributed to it's downfall. Was there any need for a Cabin with the traihead so close? RIP. Now my curiousity about the spot in the trail about two miles up the Heliotrope Ridge trail where the former cabin I saw as a teenager from Seattle is satisfied. Thanks to Ruth and Tony at the Archives Building in Bellingham. These people went out of their way to be open and helpful whenever I needed access to their collection of photos and Cabin Logs. I should mention they also have a short video of the cabin taken with an 8mm movie camera that's a kick. Also thanks to Jeff at the Whatcom County Museum for the 1925 profile of the original("Photo by Clyde Banks; courtesy Whatcom Museum"). And...thanks to my late Uncle for sharing his photos with me and now any of you to see in this article or all of them when cataloged at the WWU Archives and Records Center.

Nice little article. Mt Baker was the first 'big' mountain I climbed back in the early 90s. The cabin was long gone by then, and I always wondered what happened to it. BTW, John Miles was Dean at Huxley College when I went to grad school there.

I spent a lot of time tracking down details about this Cabin to get it right. I hope some others find time to document their history with the Cabin. There must be some others around. Glad you enjoyed it. Take care.

Good history lesson Norman. I like the inside photo of all those purty girl climbers eating dinner.

Nice historic photos and research. I can testify to the fact that the cabin was still there in May of 1985 when I climbed Baker.

Sometimes it's sad to see the old club cabins vanishing. But those were different times with different expectations from the folk who wanted to access the wilderness.

There were cars with rubber tires back then too...color film, crampons and TV? Who would have guessed? Didn't they go to the moon to? Times are different, but fun to reflect once in a while.

The cabin was there in 82

This article brought back some wonderful memories of the mountain, the Coleman Headwall and earlier in the year, a head first dive into a crevasse while leading party through the glacier and breaking through a bridge. I tested the guy I was tied to, and he passed the test! Adrenalin rush for sure...Thanks for posting, very nice.

BTW I have almost identical photo (like your first one in this article) of our tent, on the flat area beside the cabin, except, totally soaked with rain...

I hope you and others with pics of the Cabin will post them here. I am sure there are more out there!!!

Stayed overnight in the cabin - July 1981

Wow. Nice surprise finding your posts and pictures of Kulshan. These brought back great memories of hiking the mountain with my brother in 1981. My brother (from Puyallup) tells me the cabin was removed in the summer of 1986.

Thank for post... I wish I could get some others to post pictures of the old cabin. If you or your brother have pics, it would be great. Thanks.