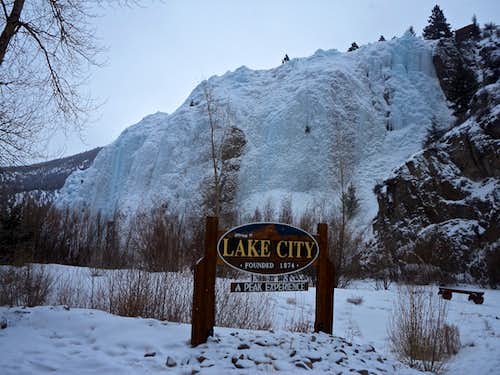 A small Ice Park - you meet mostly locals here, and a very friendly atmosphere.
The small town of Lake City has created wall of ice right on the edge of the town for climbers to enjoy in the winter months. Beautiful blue ice is located just one block south of historic Lake City, Colorado.

One of the park’s pleasures is that it’s hardly ever crowded and the crowd is mainly Colorado-based. Most climbers come from the Denver area and from Gunnison. Lots of Western Stage College students give the walls of ice a try. I visited during the Ice Festival, which is the most busy weekend, and even then the park did not feel crowded. The ice is farmed - the water for the ice wall comes out of pipes from the town and comes down through shower heads.


Lake City’s farmed ice climbs are really easy to get to, and you won’t be waiting around in a line.

Some say that Ouray and its ice park are starting to feel like Boulder West, if this is your opinion, consider visiting Lake City and its low key ice park and superb backcountry climbs. The distance is not closer to Front Range cities than Ouray, and there aren’t as many climbs to choose from, but Lake City is uncrowded and more homely. I was surprised to see many dogs and kids running around.

I know, 10 to 15 routes does not seem like much, but with directionals you can make it more varied, and for a weekend visit it is enough. Prior to the creation of the Lake City Ice Park, climbers would take snowmobiles to get to nearby ice climbs the San Juan Mountains offer. About 3.5 miles farther up the road is the upper park, near Hard Tack Mine, where more steep climbs can be found. In the nearby backcountry are several excellent climbs, including the Sherman, Open Casket and Closed Casket. These climbs are reminiscent of the long routes found near Cody, Wyoming. Or, if you are into extreme mixed routes, ski up the Engineer Pass Road to God's Crag for Jedi Mind Tricks (M13), on of the hardest dry tooling routes in the world (per on-line magazine). Jack Robert's Colorado Ice will get you started on the hunt for backcountry routes. 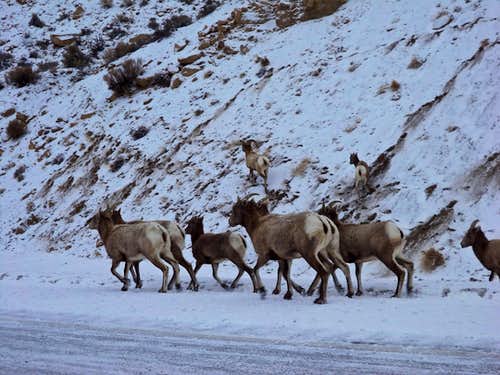 Bighorn Sheep along the road to Lake City. They like to lick the salt from the road. 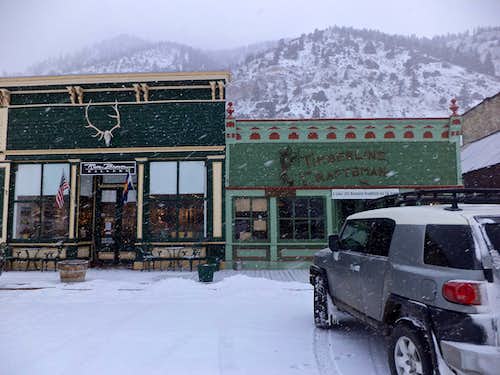 Lake City is very small, but definitively worth visiting.

Lake City is located east of Ouray and south of Gunnison. The drive from Ouray to Lake City is long in the winter (110 miles). During the summer you can take Engineer Pass Road directly, but then there is no ice there.


To get to Lake City start in Gunnison and take Highway 50 west to Highway 149 at Blue Mesa Reservoir. Head south about 50 miles to the town.


The fun climbing in the Lake City Ice Park is just southwest of downtown along Henson Creek. Follow Bluff Street or 1st street to Engineer Pass Road, aka County Road 20. 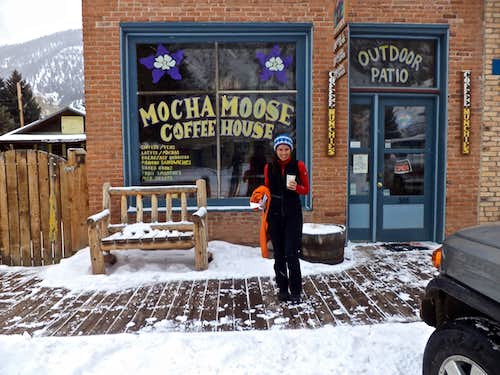 Mocha Moose Coffee House is one of the places you can sign the free permit for climbing in the Lake City Ice park.
The climbing and parking is free, but you should sign a waiver available at several locations around the town:
The park has up to 15 routes, with 60- to 100- foot pitches, from WI3 to WI5, plus some mixed routes. The base area is unbeatable - it’s flat and it has the sun much of the afternoon (assuming its not cloudy and not snowing), making for pleasant belays. The base area can be slippery. You don't need crampons to walk up the hill to establish a towrope, but better and safer with crampons when getting to the edge to throw the rope down.
The waiver = Mountaineering, Rock Climbing and Ice Climbing release of liability, Waiver of claims, express assumption of risk and indemnity agreement (that is the official name) has 2 pages, and it is really easy to fill. I did it at Mocha Moose Coffee Shop and they kept it there. It really requires only your printed name, signature and the current date. Nothing personal, e.g. birth date, driver's license, address etc. The waiver is informing about the potential risks of climbing, cold environment, equipment failure, injuries, pre-existing conditions etc. It protects the Ice Park from legal charges.

Climbers: personal ice climbing gear: boots with crampons, harness, helmet, rope
It is very useful to bring a few ice screws, even if you plan to top rope. By positioning ice screws higher up, you can redirect the route from the same anchor and have a few variations of the ice climb.
Anchoring: The anchors on the top of the ice wall feel solid. It is nice to have a few long cordelettes since most of the anchors are still relatively far away from the edge. (Consider up to 20 feet long). Trees are further back from the rim, and if you plan to use them you should bring an extra rope (ideally a static line). Obviously, you can lead ice here.
Observers: You can visit the ice park, walk along its base, bring your kids/dogs, or bring your friend/family member without any special equipment. I am mentioning this because in Ouray Ice Park you are not allowed to descend down into the gorge without crampons, and you don't supposed to bring your dog down to the gorge either.

I think you can camp right at the Ice park - it appears to have a very casual feel. There is enough place even for parking a camper, and I think you would be able to find some spots along the Henson Creek.
There are number of accommodations in the town of Lake City. A friend recommended this place, but I never stayed there.