From prehistory, the site of Lee's Ferry was the only practical crossing point of the Colorado River for about 600 miles (~970km), the river both upstream (Glen Canyon) and downstream (Marble Canyon) being deeply entrenched in cliff-walled canyons. This natural fording site was first recorded in written history by the Dominguez and Velez de Escalante expedition of 1776. Their party was directed here in consultation with natives and attempted (and failed) to cross. Later, the area was explored by Mormon scouts - especially Jacob Hamblin, and John D. Lee eventually settled here (he called it "Lonely Dell"). He established ferry service in 1872 - which operated for 55 years. The crossing at Lee's Ferry was obviated by the construction of Navajo Bridge (completed in 1929), which crossed Marble Canyon some miles downriver. The area is rich in history, including that of the Major John Wesley Powell expeditions, and is well summarized in W.L. Rusho's book "Lee's Ferry - Desert River Crossing."

Lee's Ferry is the starting point for river trips through the Grand Canyon - in prime times of spring and fall, the place is abuzz with excitement with those embarking. The cold, clear water released from deep penstocks of Glen Canyon Dam a few miles upstream make this short stretch of Colorado River a "Blue Ribbon" trout fishery famous among the western United States. The area also has geological and scenery attraction to hikers who try the area trails. 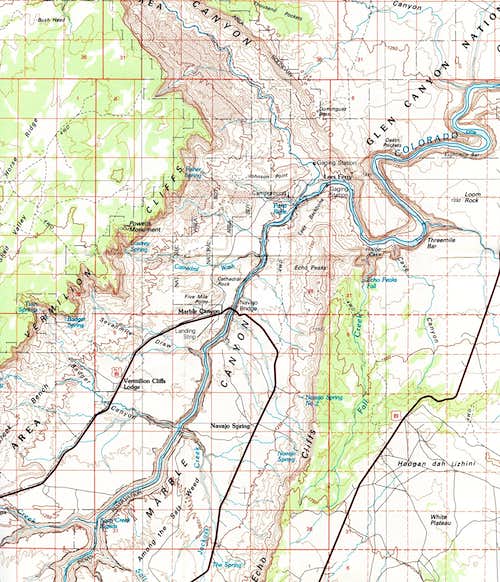 How to get there: One can approach from the north or the south. If the Grand Canyon is your primary visit objective, Lee's Ferry is easy to find (indeed, it is the beginning of the Grand Canyon). Lee's Ferry is a short spur from the most direct road route between the North Rim (Kaibab Plateau) and the South Rim (Coconino Plateau). From the north: take US Highway 89 south or east from Kanab, Utah. The most direct way is south to the hamlet of Jacob Lake (as if going to the North Rim of the Grand Canyon). Just keep following 89 eastward from Jacob Lake to Navajo Bridge (distance ~41 miles or 67 km) and follow the sign. Alternatively, one can follow 89 east from Kanab and go through Page, Arizona (past Lake Powell). From the south: again, use Highway 89 (e.g., from Flagstaff).

At Lee's Ferry, Glen Canyon ends and Marble Canyon begins. Thus, the River emerges from the towering walls of Glen Canyon, and it also begins to cut down into the Marble Platform, forming Marble Canyon (considered to be the start of the Grand Canyon). The river widens and bends here following a monocline. Glen Canyon cliffs peel away to the south (eventually becoming the Echo Cliffs), and to the west (immediately turning up the Paria River Canyon). West of the Paria River canyon, the Vermilion Cliffs (lining the Paria Plateau) stretch into the distance. Here also at Lee's Ferry is the confluence with the unimpressive little muddy Paria River, which carries sediments washed from younger rocks at its headwaters: the Paunsaugunt Plateau (including Bryce Canyon) in Utah. While the Colorado River flow is highly regulated by releases from Glen Canyon Dam some miles upstream, the Paria River can become a ferocious torrent after rains. As mentioned, trout fishing is good in the river upstream of the confluence with the Paria River. Below the confluence, the water's sediment load and lowering oxygen concentration make the river much less suitable for the trout.

The area of Lee's Ferry has a number of historical structures related to John D. Lee's activities (including his homestead and farm), mining and other commercial history. Trails and interpretive sites, a modern campground, parking areas for river runners, a put-in ramp for rafts, etc. are all administered by the National Park Service as part of the Glen Canyon National Recreation Area. The river canyon itself below Lee's Ferry is administered by Grand Canyon National Park. The Navajo Bridge Visitor Center at Navajo Bridge is the place to stop for information concerning the area. The Visitor Center is open from mid-April to mid-October, but the Navajo Bridges (the modern one and an unused earlier version) can be visited all year. Further information can be obtained at www.nps.gov.

A 54-site campground with charcoal grills, restrooms and potable water operates year-round (small fee charged). Some group sites are there, and all sites have a shaded picnic table (you'll be glad to have shade in the summer months). Most sites have also a wind-screen for the rare occasion of a strong down-canyon wind. The campground may fill in prime times (esp spring - river runners; and fall).

A system of easy trails tours the historic structures in the area - trail guides are available. An informal riverside trail also exists along the north bank a short distance upriver. One can hike any distance up the Paria River corridor trail (45 miles or 72.4 km one-way). This trail starts in an area farmed by Lee and eventually crosses the border into Utah and ends at highway 89. Overnight use requires a permit. The Cathedral Wash trail (~1.25 mile or 2 km one-way) proceeds from the Lee's Ferry road to the Colorado River. The trailhead is ~2km from the junction with highway 89a. The Spencer Trail begins as a branch from the river trail near Lee's Ferry Fort and climbs about 1560' (~475m) up the cliff to the plateau edge with spectacular views of the area. The trail is not maintained and can be difficult to follow. Do not hike it in the dark.

When to visit: One can visit year-round, but the summer days are baking hot. Winters are tolerable and the time of lowest use. In times of rain (esp. summer monsoonal rains), the trails can be dangerous due to flash-flooding.
Stop at Navajo Bridge Visitor Center (in season) to orient yourself and get your questions answered. For those who intend to use the campground: Although the evenings can be very pleasant (for stargazing, silence, etc.), this can be eroded a bit if someone fires up their electrical generator (apparently permitted by rules). The ground is typical desert pavement - with a considerable rock component. Driving tent stakes can be difficult or impossible. Although it can be tempting to sleep on the ground outside a tent, there are some potentially nasty life forms active at night. These include harvester ants (very common in the campground) which sting as well as bite. A cot is recommended. On several of my stays, I've slept very well on the picnic table.

Nearby Attractions: A partial list includes (1) North & South Rims of the Grand Canyon. (2) House Rock Valley: US 89 passes through this scenic desert grassland between Jacob Lake (N Rim) and Marble Canyon. "House Rock" is a point on the map where Forest Road 1065 branches north from highway 89 - a few buildings mark the junction. A few miles north along this graded dirt road is an interpretive & viewing site where one has a good chance of spotting California condors. Forest Road 8910 branches south of highway 89 (further east) and eventually reaches trailheads that serve to descend into Marble Canyon or climb the Kaibab Plateau. For example, Buck Farm viewpoint (Marble Canyon) and the Saddle Mountain Wilderness Area are accessed from road 8910. (3) other trailheads: a number of other trails access Marble Canyon (e.g., Soap Creek - refer to publication by Warren cited below). (4) various scenic and cultural attractions exist on the Navajo Nation (discovernavajo.com) including Antelope Canyon, and trails that access viewpoints of Glen Canyon, Marble Canyon and House Rock Valley. (5) Vermilion Cliffs National Monument: includes the Paria Canyon/Vermilion Cliffs Wilderness Area. The famous Coyote Buttes North ("the Wave") is here.

For preparing this page (in addition to NPS literature and website), I've found useful information in the following: