This 35' route goes up the face just left of the popular route Left Stuff. One might argue it is really just a variation of the latter, and some people do use the start as an alternative start for Left Stuff, but you can, and I did, climb this without using any of the holds on Left Stuff, so I contend it can stand as its own route. Although I normally don't make pages for single-pitch routes, I have here since this route is not in any guidebook.

Left Stuff is a 5.7 for the start, and I felt the start of this route was a little harder than the start of Left Stuff, with some bouldery moves, an underling, a crimp, and some balancing when standing up, so I'm suggesting 5.8, which I feel it would be in most places.

After the start, you can finish on Left Stuff, of course, but if you continue straight up, you'll find different holds and a harder finish than on Left Stuff. I'd call the rest a 5.7 or maybe a Great Falls 5.6.

You'll need to toprope this route, as there are no gear placements on it and bolting is illegal here. 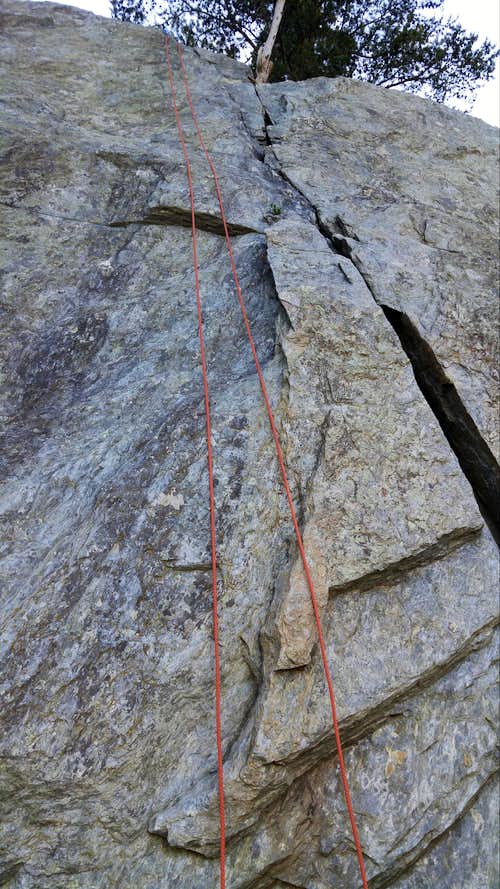 From the entrance station make an immediate right and go down into the parking lot most climbers, hikers, and kayakers use.

Walk the closed gravel road toward the river and past the restrooms. Take the Pawtomack Canal Trail. After a few minutes, take a signed fork left to the River Trail. When you reach the River Trail, bear right. Descend to a bridge and cross it, and then ascend some steps. Directly ahead is a use trail heading toward some rocks. Take that to reach the top of Juliet's Balcony.
It's probably easiest to rap down, but you can descend Trellis (5.0) or piece together a Class 4 descent just downstream of Trellis.

50-100' of webbing or static cord for building an anchor.