Although not directly on the Continental Divide for the entire route;
this is an amazing route. 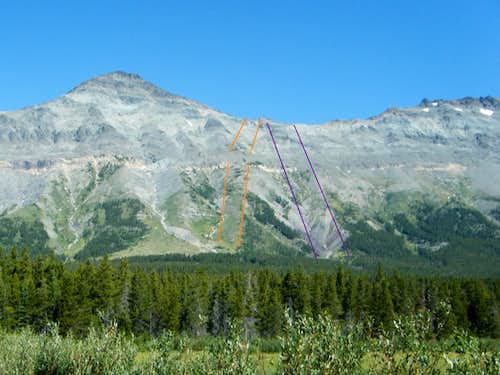 The route described here gains the Continental Divide at the saddle between Little Dog and Summit Mountains then follows it along the northeast ridge to the summit.

A direct route following the Continental Divide up the southeast face looks like it would possibly be complicated by Class 4 or 5 cliffs near the top as well as at the yellow band which is located mid-slope.

Little Dog Mountain is a unique climb and can also include climbing Summit Mountain, which is along the Continental Divide, as well.

Please see the Little Dog Mountain main page for Overview and Other Information. 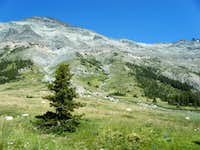 Locating the correct location to forge through the woods is not a big deal as mid-course adjustments can be made after crossing the strip of timber between the trail and treeline.

When looking at the Marias Pass quad map there are three stream drainages flowing from near the saddle between Little Dog and Summit Mountain. The second stream bed is used to ascend and the third stream bed was used during the descent as there is a nice streambed with less vegetation and water halfway down the route from a snowfield.

The correct drainage is not difficult to identify while walking along the trail.

Leave the trail at this point and prepare to gain some elevation.

J. Gordon Edwards, author of A Climber’s Guide To Glacier National Park, does not feature Little Dog Mountain in his writings. Click here for a link to the Route Map.

After leaving the human trail work along through the brush and trees for approximately ½ mile while gaining about 200 feet in elevation. Soon the trees will disappear and the long grassy slope will afford easier access through the lower elevations surrounding Little Dog.

There is a yellow band of rocks that must be passed through and the best routes through this band are where the vegetation extends almost to or beyond this band.

Above the band is the worst climbing on the route as the scree is fine and therefore the footing is difficult. After a few hundred feet the scree becomes more consolidated and is interspersed with larger rocks and the beginnings of fingers of the cliffs that extend to the saddle.

Above these fingers of low-lying solid rock enjoyable climbing can be found as the route travels through a selection of class 3 and 4 rock depending upon the route chosen.

Above the solid rock lies the saddle where at last views to the west and north over the Ole Creek drainage reveal Glacier’s fabulous Nyack region as well as presents an interesting perspective on the Two Medicine area as well.

From the saddle, the route climb to the climbers left along the Continental Divide to Little Dog Mountain. To the right is a route to Summit Mountain which is more difficult to climb than Little Dog due to extended scree slopes along the Ole Creek side of the ridge.

Initially, here the footing is moderately poor but a nice goat trail can be found which aids in a quick ascent to the cliffs blocking the summit.

These cliffs are easily bypassed by traveling to the right below them and then once again dealing with a scree slog to the summit.

The cliff can also be climbed by locating a weakness in the cliff. This entails some class 3 plus climbing and at least one class 4 cliff with moderate exposure.

As long as the climber does not venture into the Ole Creek drainage returning to the human trail is not difficult.

There are many ways to return to the trail from the saddle between Little Dog and Summit Mountain. In fact, it is highly unlikely that the Autumn Creek Trail could be missed as it travels the entire length of this area between Marias Pass and East Glacier. It is located between Little Dog, Summit, and Calf Robe Mountains and U.S. Highway 2.

Here is how we returned to the trail from the summit:

It will be necessary to downclimb through the cliffs if there is snow below the cliffs. It is NOT feasible to cross the snow. The snow presents a risk and should not be crossed! The snow is steep and forms a moat below the cliffs. Thanks to FredSpicker for this information.

At the saddle retrace your route through the main cliffs. There is a nice goat trail descending through the cliffs. It is not difficult to find as it begins near a stunted pine tree located in the saddle. Unfortunately, goats have no need to return to the trailhead and you must leave this trail to continue the descent.

Carefully work down the slope and stay to the left (north) of your ascent route to locate the third drainage which is easier to descend due to less vegetation on the slopes. As the valley opens up it is easy to spot the proper drainage.


Eventually, this drainage will reach the yellow band. There is a nice waterfall and stream which affords cool water if desired. Follow the creek as it plunges through the scree-filled canyon and eventually gives way to a rocky stream bed which aids in a quick descent back to the human trail. The stream bed has a few twists and turns but the Autumn Creek Trail does cross the stream.

After reaching the trail turn to the right and head back to the junction and at that location take the left fork which will lead once again past Three Bears Lake and then to the trailhead. Little Dog Mountain, montanaboy photo
Trekking poles will aid in your ascent and descent while working through Little Dog’s scree.

Carry bear deterrent spray. If you do not have any bear spray before getting to Glacier National Park purchase Counter Assault or UDAP at a local sporting goods store. Both of these bear sprays are Montana Made products and are effective in deterring bears when used correctly.

As with all hiking and climbing in Glacier National Park use caution and practice good manners with the wildlife. You are in Grizzly country. Carry your bear deterrent spray, don’t hike alone, and make some noise. For more information please go to the Park's web site for Bear Information. The U.S. Forest Service also has helpful information on Grizzly Bear Management.

Thanks to Fred Spicker for his editing suggestions on this page.