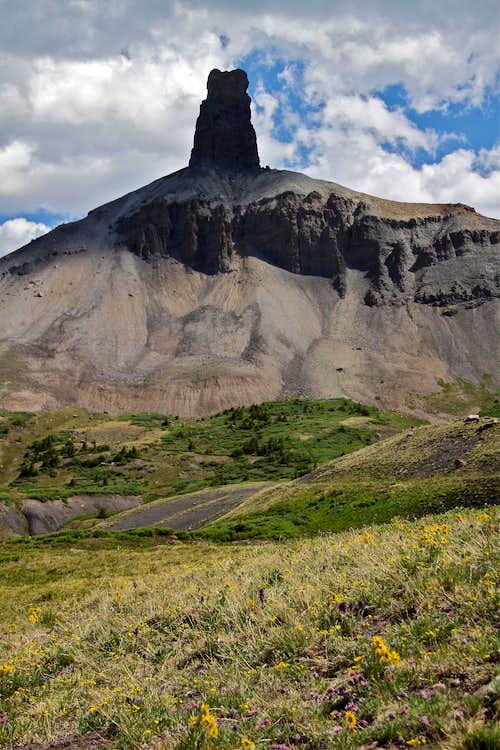 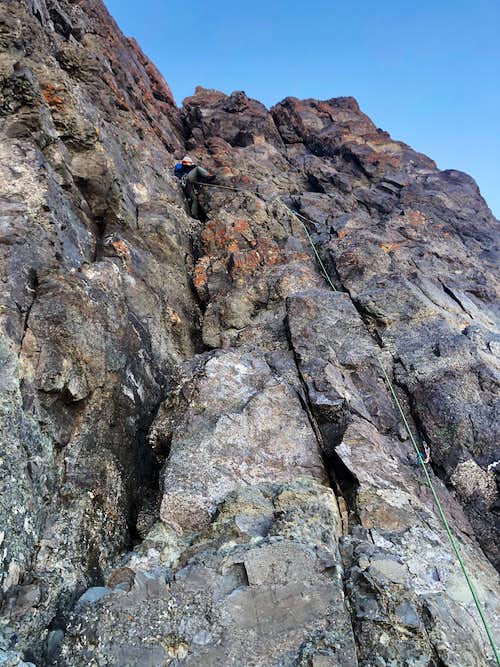 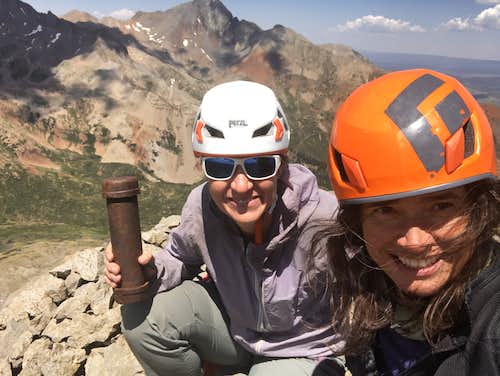 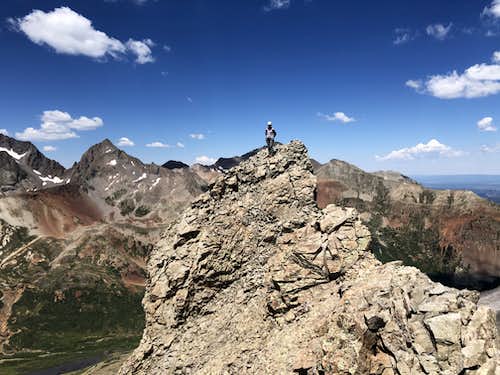 summit pose
Lizard Head has a big reputation as a difficult summit with technical rock climbing and a very loose rock. The route is rated as 5.8R. The peak is seeked not only by 13er baggers, but also by rock climbers who are looking for technical tower climbs with lots of history. The formation supposedly looked more like a lizard, therefore its name. In 1911 a large chunk of Lizard Head fell off, the peak does not resemble lizard anymore, but the name remained.

The first ascent: Albert Ellingwood and Barton Hoag in 1920. Here is what he said about the ascent:

“A rottener mass of rock is inconceivable. The core may still be solid but the “surrounding tuffs” are seeking a lower level in large quantities. This far-advanced disintegration was our greatest obstacle. Absolutely the whole surface of the rock is loose and pebbles rain down from the sides as readily as needles from an aging Christmas tree. In many places one could with one hand pull down hundreds of pounds of fragments, and occasionally we could hear the crashing of small avalanches that fell without human prompting.”

Lizard head was my 2nd 13er in 2010. I was super excited when Natalie messaged me and asked whether I know anyone interested in climbing Lizard Head. I wanted to go back up there again. I lead the first pitch in 2010, but followed the supposedly harder last pitch. Thinking as rock climbing purist, I should be able to lead all pitches in order to claim the summit.  But I was also hesitant - the rock is very loose, and is it worth the risk? One loose hold and I can injure myself. It did not take long to make up my mind. The decision reaching the beautiful rotten summit 2nd time won.

My first trip report from 2010 - click here - has more details about the approach, route etc.

The hike was uneventful. We ran into a party from Salt Lake City, but passed them and then they tried to catch up on us - the well known race who will be first at the start of the climb. We won, but I felt sorry for them. They were on the trail for a longer time and they traveled from Utah for this peak. We kept conversing the whole approach way. Natalie is originally from Moscow and we were discussing Russian literature and ended up with Pushkin's love affairs - gossiping about people long gone!

Natalie lead the first pitch. She was moving slowly, checking the holds and placing gear carefuly. The SW chimney is in the morning shade and I could feel the 45F degree chill on my body while belaying her. (45 F = 7 C). She finally reached the anchors. There are several options for this 1st pitch and the route finding is obvious. Natalie chose to follow the weakness to the right of OW crack initially and then moved to the crack. Above the intermediate belay, where the climbing goes from 5.6 to 5.7/5.8, she chose to follow the OW/chimney crack system. Face climbers may prefer to move onto the wall and clip the fixed pitons and move to the above mentioned crack/chimney higher up. The anchors are reinforced with multiple slings - some older, some newer and when clipped all together very strong.

I followed quickly, just the high altitude hard breathing was slowing me down. I continued on the class 3 scramble to the start of the last pitch. Here was the bulge rated as 5.8+ and this particular bulge kept me up all night. I think some premenopausal bulge anxiety? I was rethinking in my bed how to pull through it. It gave me a struggle 10 years ago. I read many trip reports about it and when I saw it, I felt so much relief. It looked easy. I made a little anchor for Natalie to come up the very loose 3rd class and later to belay me on the last pitch. The climb went well, I clipped the piton, stayed a little out and easily stemmed over the bulge. I could not believe it went so easy. What was the fuss about? #4 cam protects the OW crack nicely. Above this section, the climbing got easier. 5.6 chimney with small holds on its face, but no protection. I reached the anchors and felt so much happiness.

There is still a loose scramble to the summit. We both felt comfortable with the exposure and headed for it unroped (some people are roped up).The summit register was in a poor state (needs replacement!). Natalie was able to find my previous entry. We enjoyed our time on the summit. I even tried to take a little nap. Oh, I did not want to go down. The views are amazing! It is so nice to be away from electronics and coronavirus pandemic world.

The descent was uneventful. 1 rappel from the top of 2nd pitch, tedious scramble to the top of 1st pitch (we did it unroped) and final rappel. Ropes did not get stuck and the party from Utah was able to summit too, which made me happy. The clouds started to build up.

Afterthoughs: Lizard Head has become a more clean climb over the past 10 years, although the rock quality is still very poor, especially on the first half of 1st pitch. The scramble between the climbing pitches is scary - very loose and one can choose whether to rope up for it or not - pulling the rope dislodges rocks (we did it unroped). Even when rated as R, the climbing felt comfortable to me. The rock gets better when the climbing grade increases and the route is not that long. It is really only 1.5 pitches of rock climbing. It was great to summit with female partner. Thank you Natalie for inviting me for this adventure!