Ben Lomond
Ben Lomond was one of those peaks that had been on my to-do list for some time, and with the unusual amount of snow left in other places it was our best choice for a good summit day hike. I’d been meaning to do some Teton hikes with my cousin David for quite awhile, but with the absurd summer snowpack up there, we had more choices for snow-free hiking down in the Wasatch. Ben Lomond’s central location between where we both live also made it appealing. David proposed doing Willard Peak at the same time, so I agreed to go for it if I wasn’t too tired and out of shape by the time we got to the top of Ben Lomond. 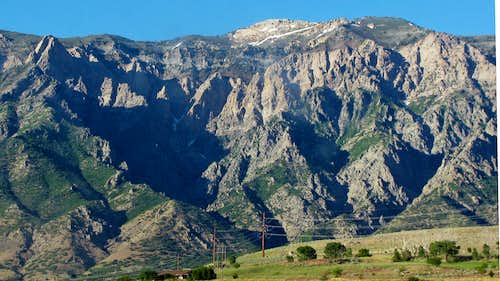 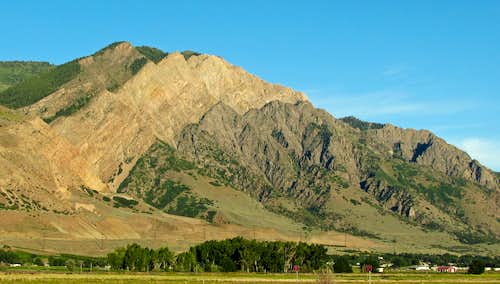 Like the designer of the Paramount logo, I too had fond memories from just a few years old of gazing up at Ben Lomond and the impressive Willard Spires along the I-15 drive between Logan and Salt Lake City. Technically speaking, the Wellsville Mountains may be steeper and the Southern Wasatch may be higher, but the views of these impressive mountains from the west are unmatched along the Wasatch Front. The first time I saw them I remember thinking how neat it would be to make it to the top of them, and twenty-five years later I would finally get my chance. We would be taking the long and scenic approach along the Skyline Trail, so getting to the top would be more a test of endurance than one of technical skill.

Pineview Reservoir
We decided to meet at the North Ogden Divide Trailhead at 6:30, but at 6:25 upon reaching the canyon entrance my spirits sank upon seeing a large “Road Closed” sign surrounded by an orange and white construction fence. I had checked UDOT’s website just days earlier and there weren’t supposed to be any road closures, so I was a bit flustered upon seeing this and quickly started trying to think of a good snow-free alternative (such as doing Mount Olympus down near SLC). Fortunately upon driving closer I saw a smaller sign saying traffic could pass through if accessing the main canyon trailheads, so I drove around a small gap in the fence and continued on. David was waiting for me right on time, so after watching someone a couple cars over unexpectedly unload goats out of the trailer behind his truck, we made our way up the trail. 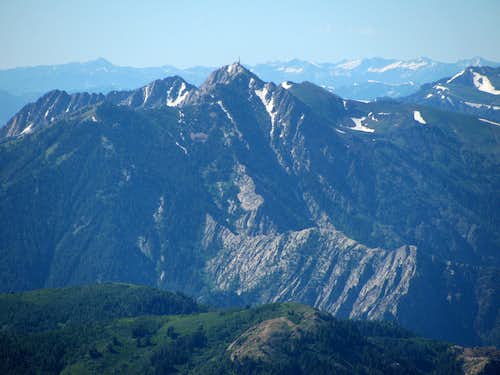 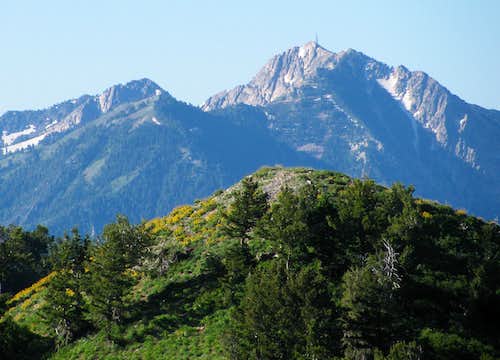 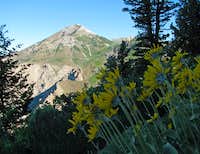 Ben Lomond wildflowers
I’d heard that the first few long switchbacks were the hardest part of the trail, but at first light it was cool enough that they weren’t an issue. The trail was very gradual, so we basically walked the entire seven miles or so up to the saddle below Ben Lomond without any stops, talking about our future hiking plans along the way. David, who has run marathons and bikes the steepest portion of the Lotoja (Logan-to-Jackson) bike race for fun, took it easy on me and set a pace that was perfect for me and the small spare tire around my midsection, but we still made decent time on our way up. Upon a short patch of trail leading back towards the south we caught our first glance of Mount Ogden and its surrounding peaks, and I was impressed by how rugged they looked from this angle. We immediately followed the trail back to the north, and it continued in this direction along the east side of the ridge for a couple more miles. The views down towards the valley to the east were very nice, and with all the precipitation in the spring it was still green everywhere. Upon cresting the top of the ridge we caught our first glance of Ben Lomond rising above the town of Ogden, and it would stay in our sights for the remainder of the hike to the top. 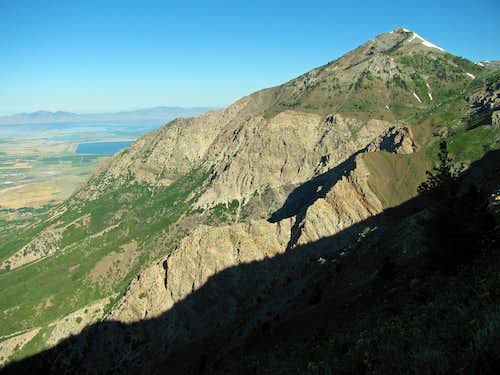 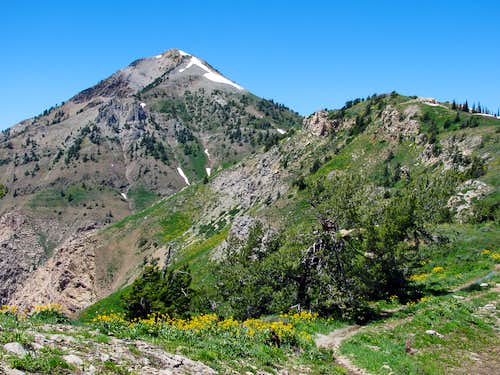 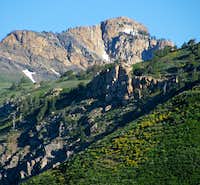 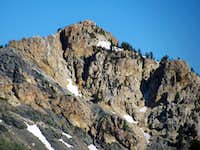 Willard south face
There were several variations of wildflowers in bloom along the trail, but the yellow ones seemed the most dominant (don’t know their names). We encountered a few other hikers, trail runners, and bikers on our way up, but for the most part the trail was pretty quiet and less crowded than I thought it would be on such a good day. There were a few smaller trails shooting off of the main one every now and then, but it was always obvious which one we should follow since the main trail was wider and more well-worn. The paint on the large sign below the steeper part of the trail leading to the top was a bit faded, but at this intersection of the North Fork Park and North Ogden Divide trails we could now see Willard Peak as well.

These are some views as we got closer to the top: 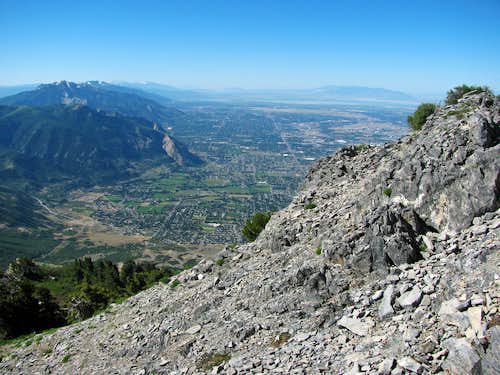 Looking down on Ogden ... 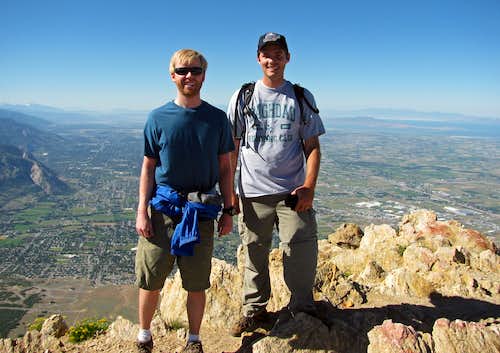 ... from the top of Ben Lomond

This next part had the steepest terrain we’d encountered so far that day, and a large patch of snow several hundred feet long forced us to make our own trail up along the south side of the snow. Along the way we saw an interesting sinkhole and deeper than expected snow bank, with impressive views of the town of Ogden straight below us to the south. I stopped for air a few times on this part, but eventually after climbing over a few little rock outcroppings we made it to the top. At the summit there is a summit plaque on top of a metal frame that opens up like a school desk, with an assortment of summit logs, prayer flags, and other paraphernalia inside. I was feeling pretty good, so after a snack break and some summit photos we continued on towards Willard Peak. 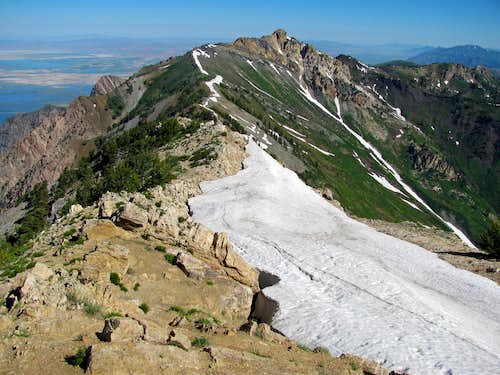 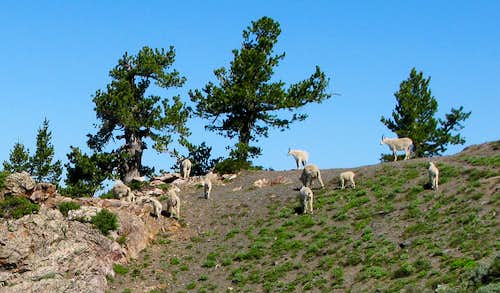 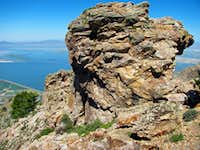 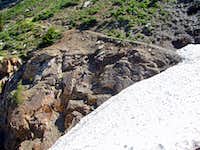 There was more snow right on top of the ridge leading between the two peaks, but there was only one short patch we had to walk through (the rest could be bypassed on the west side). Willard Peak looked daunting from here, but we’d find an easier approach from the west side. Upon rounding the hill to the southwest of the summit, we saw dozens of goats milling around. One by one they spotted us and started walking the other way, but it was neat seeing so many that close, especially the smaller ones. We encountered another snowfield here, and this one was steep enough that we didn’t want to risk crossing it (around 60 degrees with cliffs near the bottom), so we went up and around it which only took a few extra minutes. 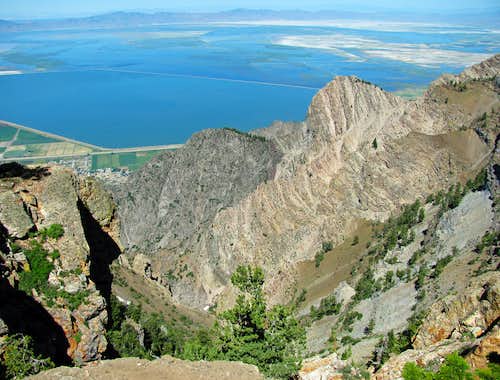 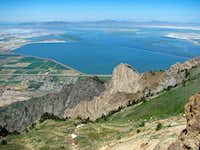 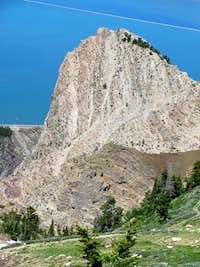 Willard Spire
At this point the views down towards the Willard Spires and Willard Bay were awesome, and it definitely ranks among my favorite scenic spots looking down from any high point in the Wasatch. I figured we were lucky to have seen two dozen goats already, but we soon spotted a dozen more climbing the rock walls above us. Among them was a larger goat with a tag-along, who kept trying to knock the smaller one back down the rocks whenever it got too close. We continued on the trail until a point we felt was directly west of the main summit of Willard Peak, but it was still a bit difficult to tell where the highest point was. David started up the slope to our east, following a short group of even more mountain goats who seemed to be leading the way for us. After making our own switchbacks up the steep slope with a few short scrambling moves we made it to the top, and were pleased to discover that the summit ridge was actually longer than we had originally thought, with the highest point being indistinguishable. 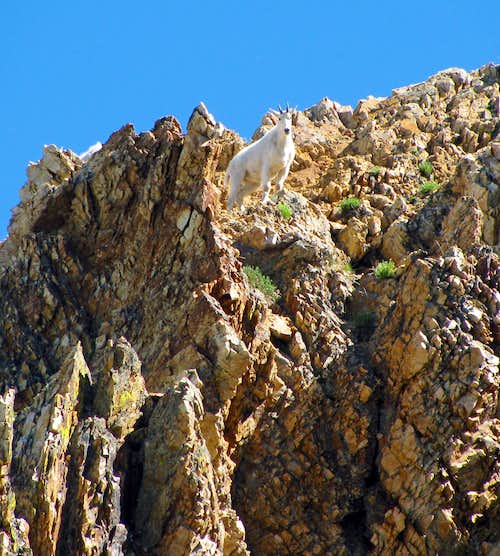 ... to the top of Willard Peak 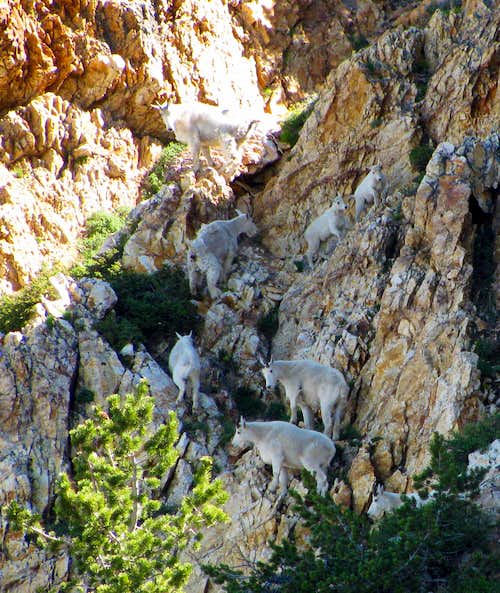 These are some views along our scramble to the top: 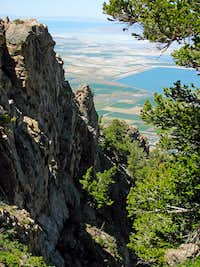 Back to Ben Lomond
In my opinion, Willard Peak doesn’t seem any higher than Ben Lomond when hiking them both, but the amazing views were definitely worth the extra four miles roundtrip and 500 feet of elevation gain. Since it was a clear day, we could see Naomi Peak above Logan to the northeast, the salt flats along the southwest border of the Great Salt Lake to the west, Mount Nebo over 100 miles to the south, and the snow-covered Uintas off in the distance to the southeast. We could see some ATV’ers in the distance at the top of the hill to the northwest, and with ten miles still separating us from our cars, I wouldn’t have minded being in the slacker crowd at that point. Due to the gradual slope, the trip back down seemed to take just as long as the trip up, but we broke up the monotony by catching up on all sorts of things. I even unleashed my inner geek when talking about my video game exploits growing up, although I must say I’ve always tried to maintain a good balance of sports and other physical activities to offset my nerdiness. We saw a rattlesnake on the way down, which was a first for me, whose mangled neck and head could likely be attributed to either one of the bikers or someone from the scout group we encountered. 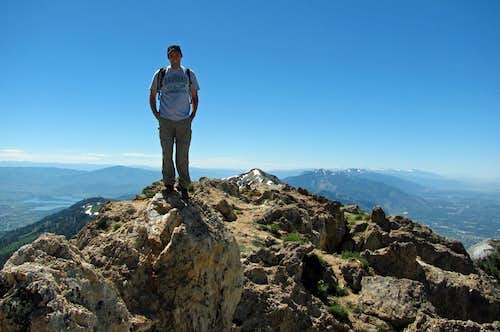 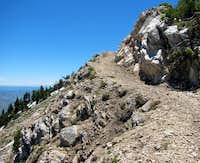 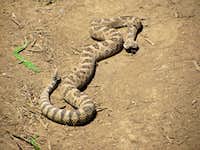 At about the eighteen mile mark my feet started getting quite sore, and the heat combined with my incurably sweaty feet made for the creation of some freakishly large blisters on the way down (I have the uncanny ability of selecting hiking days weeks in advance on days when there is not a cloud in the entire sky). We spotted the parking lot a mile or two from up higher on the trail, but rounding each switchback seemed like a slap in the face as the cars didn’t seem to be getting any closer. Eventually our twenty mile hike ended (a new record for me), and despite the soreness I was glad to have done it. 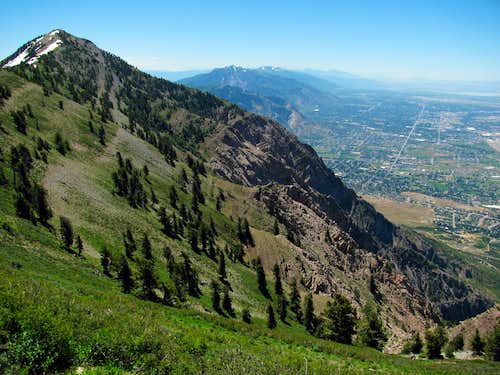 Ben Lomond above Ogden
The Skyline Trail is definitely one of the most scenic places in the Wasatch, and if I’d known this sooner I would have included Ben Lomond and Willard Peak in my peak list much earlier. It’s easy enough for anyone in good shape as well, as there’s a Class 1 trail the entire way except for some off-trail hiking and easy scrambling for the last few hundred feet leading to the summit of Willard Peak. 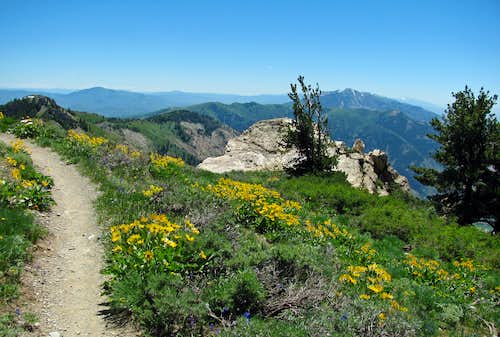 Views along the Skyline Trail

Stellar report Brandon. You do great write-ups about your trips. I really enjoyed this one, since I did it with you. Nice work!

Thanks, David. I'm looking forward to our next hike!

Thanks. Even though my feet protested, I'm really glad we made the extra push to Willard Peak, since it had the best scenery of the trip.