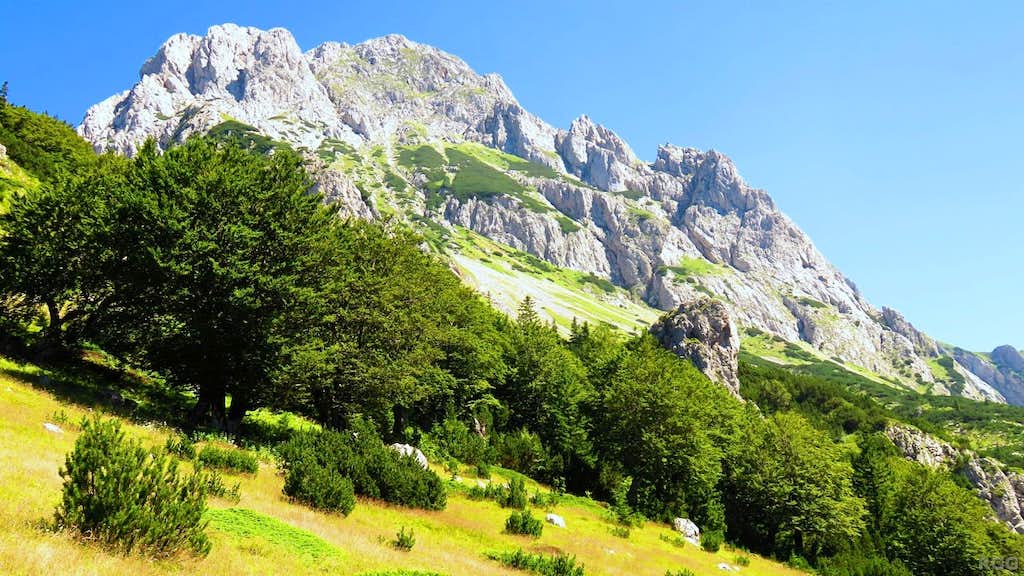 Magnificent view of Maglić from the Prijevor trailhead
Maglić is the highpoint of Bosnia and Herzegovina and of the Sutjeska National Park. It's a beautiful area, well worth visiting. The highpoint lies on the border with Montenegro, and there are several trails to get there from either country.

When starting in Bosnia and Herzegovina, the two main trailheads are Dernečišta and Prijevor. A third popular route starts at Trnovačko lake, which lies in Montenegro but is easy to reach from Prijevor in about 1.5 hours on foot. There is no road access to this lake. Prijevor is also the trailhead for the shortest route to the summit: directly up the scenic northwest face.
Total elevation gain from Prijevor to the summit is 718 m, trail length 2 km. If you think about it, you'll realize that this is steep! Before I went to Prijevor, I had seen the route drawn on a map and read a short description that said it was "a difficult mountaineering trail". No grade was given, but harness and helmet were mentioned. I asked around to find out more, but didn't get any useful information. Apart from "don't know" the answers I got ranged from a vague "difficult" to a useless "don't do it!"

I figured, since the trail is on the map, it's probably within my capabilities. What I experienced was that, despite the rapid elevation gain, it's still mostly hiking. Only about 100 m requires some scrambling, where you'll need at least one hand and sometimes two. There are a few exposed places, where falling is not an option. My estimate is UIAA grade I.

According to the National Park information, the route takes 3 hours - I found that rather generous, I would say 2 - 2.5 hours.

The nearest (small) village is Tjentište, along the M20. Contrary to what the "M" suggests, this is just a two lane road.

The nearest big city, with an international airport, is Sarajevo. From there, take the E762 in the direction of Foca. Four kilometers before actually reaching Foca, immediately before crossing a bridge, turn right onto the M20 to Tjentište. At the southern end of the village is the info center of Sutjeska National Park.

There was a fine topographic map outside when I got there, and I wanted to buy one. However, the center was closed - perhaps because it was a Sunday - and I saw no sign with opening hours. I took some pictures instead, and used those as my map for the area.

The trailhead for the NW face route is the parking lot at Prijevor (1668m), 20 km from the visitor center and deep in Sutjeska National Park. To get there, take the dirt road that branches off of the M20 almost exactly 1 km north of the visitor center, back in the direction of Foca. A sign by the road reads "Mrkalji".

If the road is dry, it can be driven by a regular car. When wet, you'll need a 4x4 to have any chance to get all the way to Prijevor. At first, the road isn't too bad, and passes a few homesteads. This is Mrkalji. Well past the last one is a barrier. A small fee (I didn't make a note, but remember something like a couple of euros) bought me an entry ticket for Sutjeska National Park, and the park officer in attendance raised the barrier. Higher up the dirt road gets worse, and some stretches are as bad as a road can get while still drivable by a regular car. Approaching Prijevor, it gets better again. Altogether it took me more than an hour to get there.

There is ample room to park, wild camping is allowed and there is lots of flat space for it. According to the map, there is a spring. I didn't look for it, as I had brought enough water. The road ends just past Prijevor.

Without a car, or when the road to Prijevor is undrivable, a very long day trip is possible from the Suha trailhead (±700m), which is a parking spot / rest area along the M20, 6 km southwest of the Info Center. The shortest option is to hike from Suha to Prijevor (3 hours), ascend the NW face and return the same way.

It's not easy to get to Tjentište by public transport. There are buses to Foca, but, as far as I know, not to Tjentište. If you want to get all the way to Prijevor by taxi, be prepared that the driver may refuse to continue somewhere not even half way up the mountain because the road is too rough for his car. The day after my climb someone told me that Hotel Mladost, located next to the info center in Tjentište, might be able to provide 4x4 transportation.

From the Prijevor trailhead, Maglić looks impressive. Have another look at the image at the top of the page to judge for yourself. If you're a hiker and think that there cannot possibly be an easy way to the top on this face, you would be right; not for most hikers anyway. But if you don't mind using your hands and can handle a bit of exposure, there is a route for you. And remember that a frontal view makes a mountain face appear steeper than it actually is.

The first challenge is to find the start of the actual hiking trail - I walked right past it at first. From the car park at Prijevor, a short road heads up the mountain, direction southeast. At the end are three small huts (visible in Satellite view). The trail starts less than 100 m before that, on the left side of the road when walking towards the huts. The map on the right is centered on the spot. The trail heads for the woods on the lower slopes of Maglić and is easy to follow. 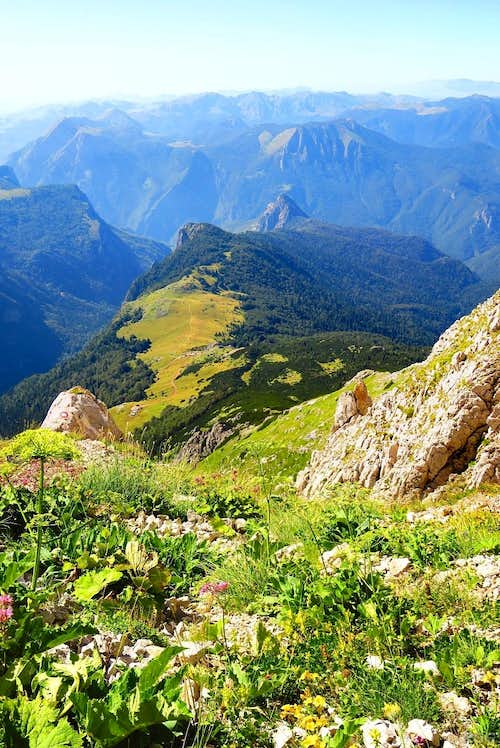 Looking down from the NW face to Prijevor, some 500 m below
At first it isn't very steep, but that soon changes. Higher up, above the tree line, there are several scree filled gullies. Each time the trail reaches one of them, it invariably disappears, but usually it's clear to see where it continues on the other side. However, sometimes the route actually ascends by the side of the gully for a short while, instead of crossing it. So, when you don't see a trail on the other side, look up and you'll probably see some of the plentiful red paint markers that show the route. 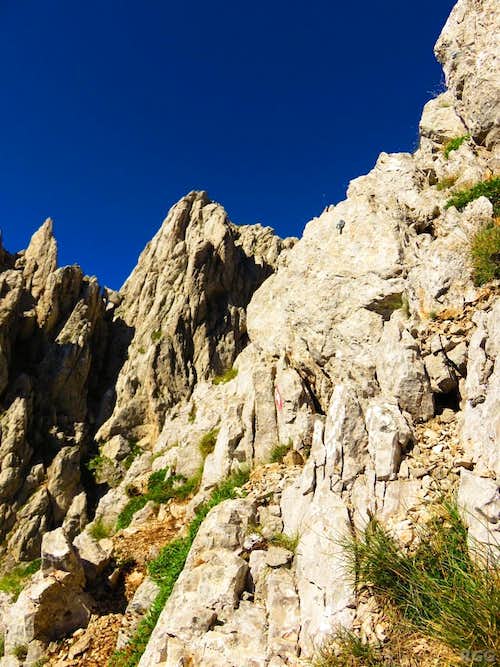 A route marker and a fixed bolt high up. Best to use two hands.
At around 2200 m or so, the scrambling section starts. More red paint marks on the rocks show the way, and occasionally there is even a bolt. The scrambling doesn't last long, and about 100 m higher it's hiking again, all the way to the top.

To return to Prijevor, here are several options. 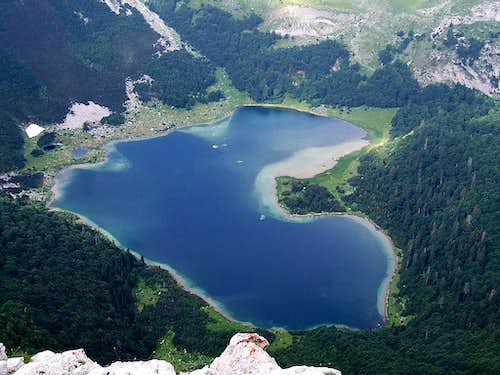 Above the tree line the terrain is a mixture of barren rocks and grassy patches. At the right time of the year, it is brightened by an explosion of colorful flowers: 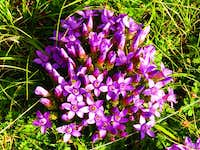 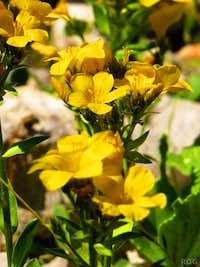 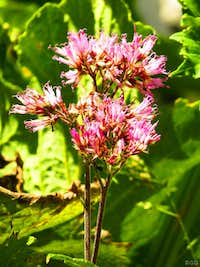 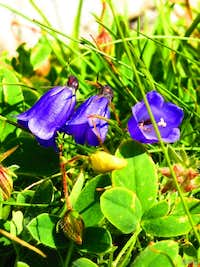 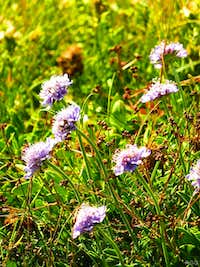 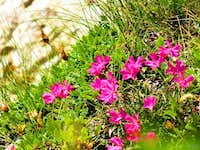 An entry ticket to drive into the park on the dirt road to Prijevor costs a couple of euros, payable at the road barrier. I don't know if it is open or closed when there is no park official in attendance; if you do, please let me know.

Wild camping is allowed and Prijevor is a popular spot for that. 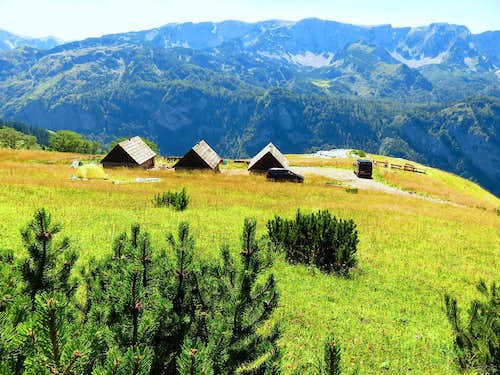 A few huts at Prijevor

Best from late spring to fall. The face is steep, so unconsolidated snow can result in serious avalanche risk. 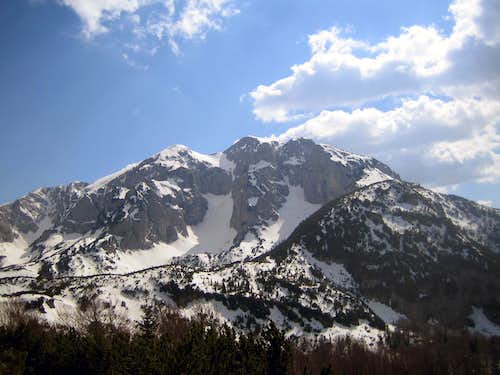 Maglić, end of April. View from the NNE, from a bit south of Dernečišta

Summit panorama from Maglić, highpoint of Bosnia and Herzegovina.

At the time I wondered if that nearby grassy peak right of center, which is part of Maglić, was higher. My map gave no elevation, but I knew that it was in Montenegro, so it couldn't be the highpoint of Bosnia and Herzegovina. The trail to Trnovačko Lake (visible on the far right, deep down in the valley) passes close by, so it took only a few extra minutes to go up there. Later I learned that it was indeed the true summit of  Maglić, all of two meters higher.