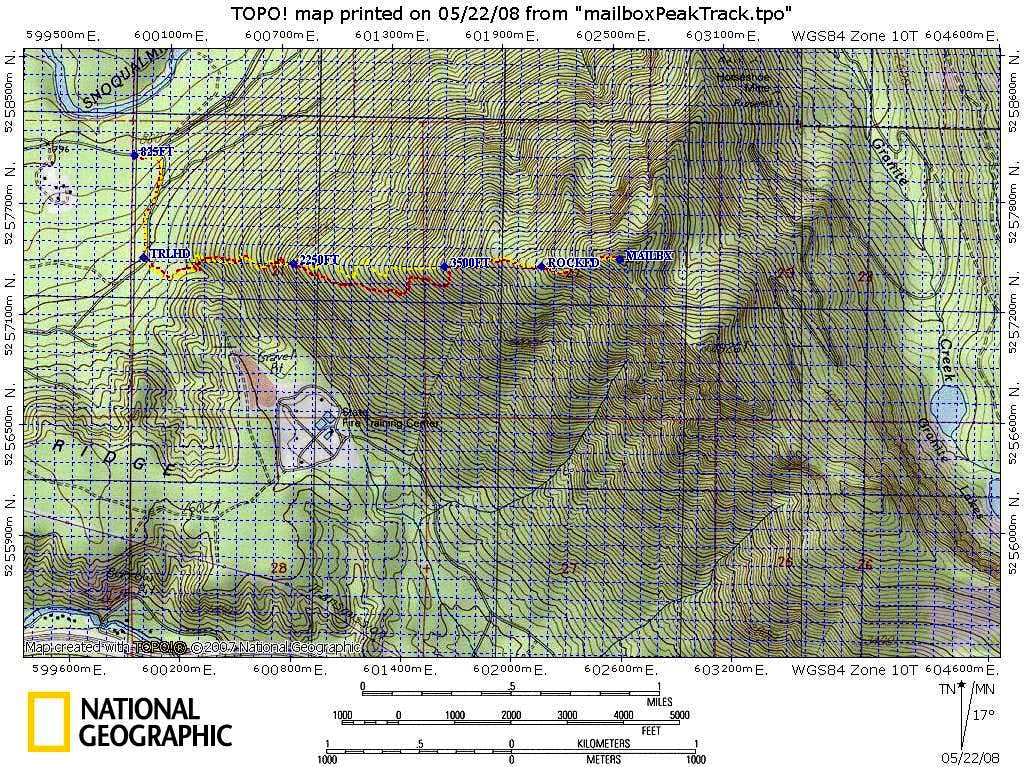 July 2010 Update: I climbed this three times in June and July, 2010. The junction at 2250' now goes right. You can see a bunch of branches on the old (yellow) trail. The reflectors make it easy to stay on route, and the trail quality has continued to improve. Once the rock field has melted out, the trail going around to the left is much better, unless you just like rock fields. If you do, you will love the Eldorado Peak approach. May 2009 Update: I climbed Mailbox on 5/24/09, and didn't get lost. Others have said to stay to the left on the ascent, and I agree with that advice. You can tell the WTA has been out improving the trail, and it's now marked with triangular white reflectors. There's a little bit of snow on the trail before the rock field, and good snow coverage on the rock field making for an easy ascent. May 2008: I followed the orange tree marks on my ascent and lost the trail at 3400-3450' (see dotted-red track) The main trail was about 100m north, and was well marked, and I descended that route (see dotted-yellow track.) The two trails diverge around 2250', and rejoin at 3500'. I marked these two waypoints, and the rock field (ROCKFD.) After the rock field melts out, the trail stays to the north of it. May 17, 2008 The red track measures 4060', 2.56 mi, and the yellow measures 4070', 2.63 mi. As expected, the elevation gain of the two tracks is close, and the yellow track is a little longer. You can see some track deviation on the lower portion of the route where the forest is thick, so there's some error in both tracks. These tracks were generated using a Garmin Etrex Vista Hcx, and the antennae sensitivity is pretty good. The Garmin 60Csx might be a little more sensitive (quad helix vs patch antennae), but I went with the smaller unit, and haven't been disappointed.
« PREV NEXT »

These GPS maps you have been posting are awesome. I'm going to make them a part of the front pages. Keep up the good work.

Thanks. I've climbed Mailbox three times, and got off route to the south every time.