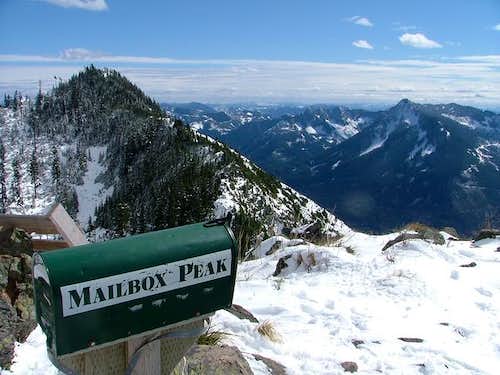 Mailbox Peak, located between the Snoqualmie middle-fork and southfork drainages, is the North-West end of a range that includes Mount Defiance, Bandera Mountain, and Granite Mountain. There is a fire-fighter training center located at the south east foot of Mailbox Peak and trainees often use the rigourous path for physical conditioning. The last time I visited the summit, one of them had carried up a solid iron street corner fire hydrant and left it next to the mailbox. I have heard of another time when they carried a full-length ladder to the summit and back.

Mailbox Peak is not the sort of hike that is chosen for a fun, easy outing. The grade of the trail makes it one of the much more difficult hikes in the I-90 corridor. Often in Spring and early summer you will see mountaineers lugging full heavy weight packs up and down to condition for Mt. Rainier or Mt. Baker trips. Although this hike is a real challenge, mountain folks retain they're sense of humor with an inside joke. Mailbox Peak actually has a mailbox on top with a summit log and a changing assortment of mail in it. This strange tradition goes back to the 1950's. What does the mail consist of you wonder? Well, go see for yourself.

From Seattle take I-90 East past downtown North Bend to Exit 34. Turn left at the Stop. In 0.6 mile turn right onto SE Middle Fork Road (#56). After a mile or so, you will come to a fork and the road will split. It doesn't matter whether you go left or right because both ways converge after a quarter mile. 2.5 miles from the beginning of SE Middle Fork Road, there is an unmarked parking space on the left side of the road (right after gravel road starts). Across the street is a white, rusty, metal gate.

Across the street from the parking area is a gravel road with a blue gate. Go around the gate and continue up the road for just less than a quarter mile. It will be the first small trail that opens up on the left. You will know you are in the right place if the incline is mellow and you go past a creek after 200 yards. After another 100 yards, the trail becomes immediately steep. The trail is rough, steep, and has several spurs that along the way later rejoin the main path. The last mile is slightly undefined but with conical shaped peaks such as the mailbox, generally up is the right direction. When you pass the talus slope, you are nearing the summit.

The Department of Natural Resources announced in June 2008 that it has plans to make some changes to the route to the summit. As many of us know, the condition of the trail in spots is severely eroded. The increased popularity of this hike has resulted in an increase of damage to the ground-cover. Many tree roots are now exposed and multiple ankle injuries have been reported. Recently the WTA decided that this trail is not up to WTA standards and a notice / warning has been posted at the trail head. The DNR intends to make "emergency repairs" while maintaining the rugged nature of the trail. Furthermore they plan to build a new trail with an easier grade as an alternative option, hoping this will take some of the strain off the old trail. 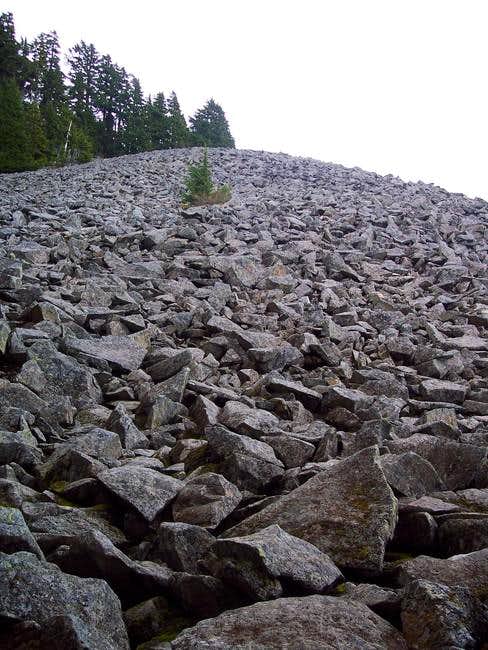 Talus Slope near the top
2009 UPDATE by Redwic:

1) The entrance gate has been painted blue, again.
2) The "Mailbox Peak Trail" now has a trailhead sign/kiosk.
3) The trailhead sign says the trail is now 2.5 miles each way, with an elevation gain of 4000'.
4) Little white diamond signs have been sporadically placed on trees along the trail, to help keep hikers on the right track.

The heavy runoff of January 2009 caused severe damage to the SE Middle Fork Road. It was closed for several weeks but has now re-opened. It might still be down to one lane in spots as repairs are being made.

Please remember to observe the leave no trace policy. This means don't leave your garbage in the mailboxes for other people to pick up. Let's keep Mailbox Peak nice for everyone. Thank you.

No camping allowed (have fun trying to find a flat space large enough for a tent anyway), no water, no toilets. You will definitly want gaiters and in-step crampons in the winter season up until late April. Trekking pole recommended year round.

WARNING: There have been reports of serious avalanches on the upper portion of this mountain. It may not seem possible but the upper third of the mountain has little tree cover and there have been several reports. Excercise extreme caution in the winter and check predicted avalanche conditions. 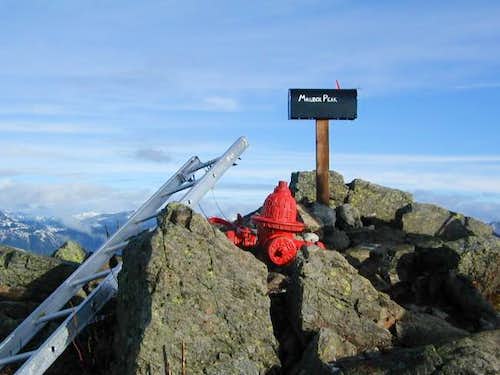 Objects on the summit, 2002
All year - but beware of avalanche danger. If hiking in the winter, check the USDA Avalanche Forecast.

To read recent trip reports got to the Washington Trails Association and search for "Mailbox Peak".

Newcomers to this page may wonder why there are so many pictures of the mailbox on top (I added one myself). One reason is that this peak is a special place for hikers, and the mailbox is a kind of "secret handshake" for those for whom hiking is more of a lifestyle than a sport.

I am waxing a bit philosophical here, but to me, the peak itself and the mailbox, indicate a familiarity, or at least a willingness to become familiar with, the special delights and miseries of North Cascades travel.

If I see a guy by the mailbox, I can be assured that he has, or he wants to tackle rough n' ready trails around Glacier Peak or Monte Cristo. I'll bet he's heard of the Ptarmigan Traverse. He probably knows where Sloan Peak is.

The mailbox is an unspoken joke and bond between a pretty small group of like-minded folks. And inside jokes or references are always fun!

Of course, maybe the fire training camp below spoiled it by bringing an ungodly amount of things up later, like a ladder and a fire hydrant. :-).