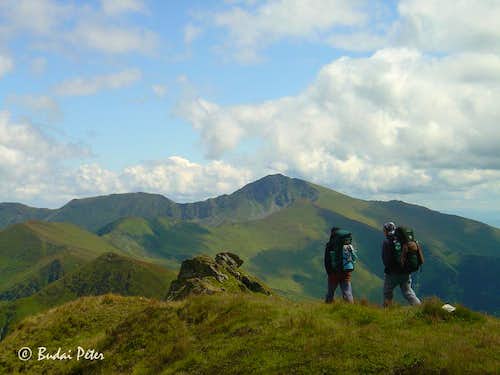 The complete ridge trail of the Rodnei Mountains /Munţii Rodnei, Radnai-havasok, Rodnaer Gebirge/ spans over 57 km in the east-west direction, connecting Pasul Şetref (818m, west end) and Pasul Rotunda (1271m, east end). The trail is marked with red stripes (against white background) and can be split into three parts (see the Route Description section below). Backpacking along the main ridge of the Rodnei Mountains is a very nice experience, especially in nice weather. If you can afford to spend a few days in this beautiful area, perhaps this is the best hike you can do here. The trail is long, but has no difficult parts - walking is all you have to do. As there are no huts along or near the route, prepare for nomadic conditions. Nevertheless, designated campsites are quite sensibly distributed, and most of them are situated near springs. In the 2010s two unmanned refuges were built Sharing your own experiences about this trail is very welcome. Also, feel free to report any typos, broken links, etc.

Near  Şetref pass
Pasul Şetref /Şetref pass, Szacsali-hágó/ is located on the paved road 17C, between Dealu Ştefăniţei /Szalanca/ and Săcel /Izaszacsal/, and can be directly approached only by car. There is an inn and a campground here. If you plan to come by train, the closest stop is Dealu Ştefăniţei. From there, blue triangles lead up along Fundoaia creek to La Jgheaburi, where they join red stripes coming from Pasul Şetref. 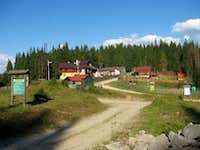 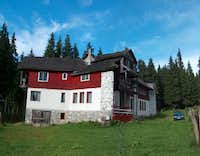 Alpina hut at Rotunda pass
Pasul Rotunda /Rotunda pass, Radnai-hágó/ is located on the national road 17D between Valea Mare /Máriavölgy/ and Rotunda /Borsaszéplak/ villages. This section of road 17D is dirt road, asphalt cover does not extend past Valea Mare! Rotunda village can also be approached via road 18 from Borşa or Cârlibaba. At Pasul Rotunda you can find a campground and Cabana Rotunda mountain hut. No train access.
Midpoints of the trail can be approached from several other starting points (which are covered in the Route Description section below). The three most popular are the following: 1) Borşa /Borsa/, 2) Rodna /Óradna, Alt-Rodna/ or Şanţ /Újradna, Neu-Rodna/ and 3) Staţiunea Borşa /Borsafüred/. Access to these places is described on the Buhăescu Mare /Nagy-Bukuly/, Ineu /Ünőkő, Kuhhorn/ and Gărgalău /Gargaló/ pages respectively.

The description below follows the route from west to east, divided into three parts. Of course, it can be done in the opposite direction as well. 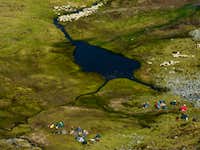 Campground at Rebra lake
From Pasul Şetref the trail ascends onto the Bătrâna plateau mostly through woods, following a cart road. There are two camping grounds along this section of the trail: La Jgheaburi (cca. 1400m) and Pasul Pietrii (1196m). The trail leaves Bătrâna plateau at Tarniţa Bătrânei saddle, and climbs up to an elevation of over 1800m. From this point the trail will not drop below 1800m for quite a few kilometers (in fact, it will fluctuate around 2000 (+/-100) meters most of the time). Vegetation changes to be dominated by alpine grasses. Between Tarniţa Bătrânei and Tarniţa La Cruce there are two "parallel" variants of the trail: one follows the cart road (moderate slope), the other climbs Vf. Gropilor (2063m) and Vf. Rebra (2119m) - the south end of the Pietrosu-Buhăescu ridge - before reaching Tarniţa La Cruce (literally Saddle with the Cross). The latter trail is joined at Vf. Rebra by the blue stripe coming from Borşa (enabling access to Buhăescu Mare /Nagy-Bukuly/ and Pietrosu /Nagy-Pietrosz/ peaks). The cart road ends at Tarniţa La Cruce, a pass under which you will find Rebra lake, a designated campsite. From here the main ridge trail is only a simple footpath.

In this final section, the trail descends to Şaua Gajei (1721m) where it merges with a cart road which leads all the way down to Pasul Rotunda. There is an almost-parallel trail, descending the Lala Valley, situated north of the main ridge (this trail ends at Gura Lalei, north of Pasul Rotunda).

View towards final part of main ridge from Vf. Ineu

The image map below gives an overview of the marked trails in the Rodnei Mountains. Apart from major peaks and trails, it shows designated campgrounds, mountain huts and some guesthouses in and around the mountains.
There are no mountain huts on or near the main ridge. Around 400 m SW of the summit of Ineu, at 2150 m on the main ridge trail marked with red stripes sits a tiny shelter which can sleep four to six people. In 2017 a bigger, more decent shelter named 'La Carti' was built at Şaua Între Izvoare (a pass east of Repede peak) at 1828 m. It is a few kilometers SE of Pietrosu. On the very summit of Pietrosu stands a ruin of a weather station, which is also used as a shelter. It is rather unwelcoming though. Key - white dots and black dot: designated campsites - red dots: mountain huts and unmanned refuges - blue squares: guesthouses (Please note that there are many more around, e.g in Borşa town or in Borşa resort called Complex Turistic Borşa) - bold black lines: asphalted roads (dotted: unpaved portion of road 17D) - green pentagons: settlements - red line: main ridge trail - yellow lines: other waymarked trails - blue triangles: mountain peaks Some of the featured points are clickable - these contain links to subsequent webpages (both SP and external).

I have been on the middle portion of the trail ("Part 2" in the description above), which I think is the most exciting. Both ends of this section can be approached more easily by train/bus than the main ridge route endpoints. Also, since Vf. Pietrosu, the highest peak in the range (and thus a "must-visit"), is located on a side-ridge served by a blue stripe (which connects Borşa with Tarniţa La Cruce), it is very straightforward to start or finish the hike in Borşa and stay overnight at the weather station campsite (1760m), just below the northern face of Pietrosu. The image below shows the transect of the path I have taken. Optionally, in the case of bad weather or emergency, you can also leave the main ridge at Şaua Gărgalău and head towards the ruins of Cabana Puzdrele or Cascada Cailor, and then to Staţiunea Borşa, the nearest settlement. The southern "escape routes", except for the one from Vf. Ineuţ to Şanţ, are rather long and most of them poorly marked, hence they are not mentioned here.

Flocks of sheep as well as herds of horses and cows are frequent in the Rodnei Mountains, especially around the passes. While sheep are not dangerous, care must be taken with the aggressive shepherd dogs whose role is to keep bears away from the sheep. Direct approach of the flock is not advisable, it's better to get around them at a proper distance, without stopping. Fortunately, along most of the the main ridge and in the most popular access valleys sheepdogs have got used to hikers and do not pose such a threat as those guarding flocks in the more remote, rarely visited areas. 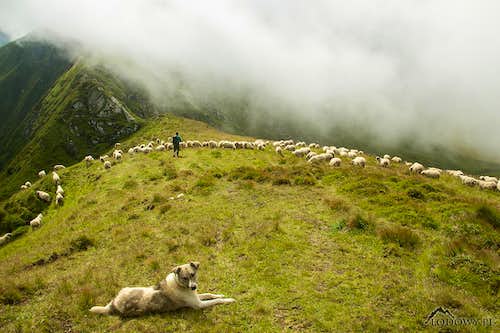 A tent, food, a cooking set definitely. Rain and windproof stuff can be useful. A bag for trash is a must.
And don't forget to take your camera, so that you can upload some new pics here :) TR by Claudia Gican 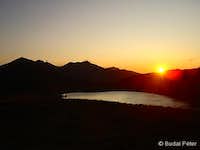 Talking of the dogs, have you/any of your friends tried out the ultrasonic dog deterrent/repeller? I wonder how this kind of modern technology would work on them (I was bitten once: see Comments on that pic).

No, we haven't tried any of those stuff, only used common sense and were fortunate enough to have sheperds along with the dogs :)

When I was attacked I didn't have any chance - I tried pretending to throw invisible stones at them, a technique which saved my butt in similar circumstances in the Pirin the previous year - in vain: the one in front of me hesitated just a little bit, perhaps because it was sure the one behind me would do the job, and it did, in an instant. I wonder if I would've stayed alive if the shepherds hadn't rushed to help.