This is the route they give you if you have a limited time. Marangu is allowed in 5 days, all other routes require more days even if you are faster - park regulations. The success rate on Marangu is 72% per my guide. Yes, you sleep in the huts, but ascend the elevation pretty fast.
And you can no longer buy coca cola on route…

Mar 4
Arranged the climb within 2 hours after arriving in Moshe from Nairobi. Originally I was quoted $695 for a 3-day climbing package on Marangu (gate to Horombo, Horombo to Kibo, Kibo to summit to gate). I doubt the agent believed I would be able to actually make it. Shortly after paying, the agent realized that the park requires payment for at least 5 days so the fees increased to $1000+. He tracked me to my hotel and I paid the balance.

Mar 5
Pick up from hotel at 8:45am and drive to Marangu gate. Registration at the entrance took some time, then I finally started the leisurely hike up to Mandara and eventually arriving at Horombo. Despite every team is required to have their own cook, it seems there is a single kitchen because all the guests had basically the same meal (which was ample and tasty). There was some difference in condiments and side dishes such as fruits.

Mar 6
I was feeling good so when I left camp I thought I might skip Kibo and go straight for the summit. I actually went off trail and made straight for Barafu camp, which is on the Machame trail, where I had lunch. I arrived at 5pm so it took less than 4 hours to the summit (Barafu-Uhuru) and an extra one hour down to Kibo.

Mar 7
Easy day from Kibo back out to Marangu gate. I was hoping to take a different route off the mountain but it was against the regulations. I'd already been reprimanded for taking a route that 'was not on my itinerary' and 'climbing without a guide', so I figured I should behave at least one day while I was on the mountain. Besides, Marangu is actually very scenic as it gradually ascends thru the montaine forest, moorland and alpine desert, etc.

Steven and I on the summit !!! 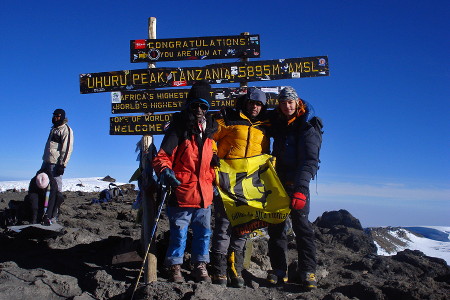 A good friend convinced me to give another go to Kilimanjaro, and after seven years I finally got to the summit of Uhuru Peak. I enjoyed the feeling, and we did a good acclimatization work.

Despite acclimatising on Mount Kenya just days before, found this pretty tough. But for someone who is use to sleeping in a tent; carrying and cooking all their own food; and digging a hole whenever I go to the toilet, this was pure luxury...

Coca-Cola or not it was still tough. I am so proud of my wife for toughing it out and summitting.

Dad and I climbed with guides from the Marangu Hotel. 5 day trip. Probably saw a lot more glacier in the crater than climbers today!

Because of reasons I already explained in my trip report , we withdrew from Hans Meyer's Cave to Kibo Hut. Two members of our team made it to Uhuru Peak, though