Trip Report:
Returning to Zermatt to climb the Matterhorn had been in the back of my mind since my first trip to Europe in 2010. On that occasion we had good luck in France and Italy, but unfortunately when we rolled into Zermatt the Matterhorn had just received a sizeable dumping of snow- thus a side trip up the Briethorn and a couple nights of drinking ensued in Zermatt before leaving town with thoughts of what could have been.

After that first trip to Europe I'll admit my desires to go back and climb there were mixed- the terrain and views are great, as is the selection of classic climbs, but the crowded routes and sometimes overstepping guides on them didn't cast a friendly vibe in the alpine. Knowing full well that this route was busy I mentally prepared myself for what might be a gong show once the door opened up at 5:20AM at the Horlni hut.

This trip was a family trip- a couple friends were getting married in Germany, and a climb in Switzerland was the second leg of our trip. With good weather forecasted for the week following the wedding, myself, my wife and our 2 1/2 year old son jumped on a few trains and rolled in Zermatt. Ironically, just as my previous trip in 2010, the Matterhorn had just received a dumping of snow and at the time of our arrival and the route was out. 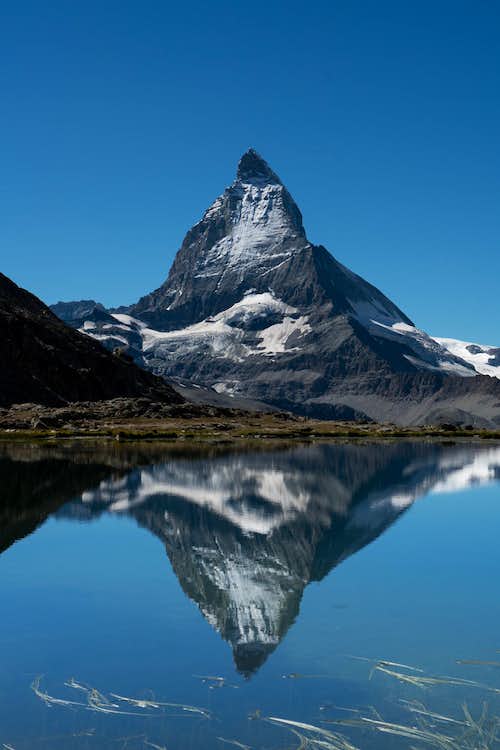 Matterhorn
With solid stable weather we made good use of the first few days we were there. A trip up to the Gornergrat Bahn observatory and some sightseeing along the way. As well the following day we went up the Klien Matterhorn and spent some time acclimatizing at 12,740. 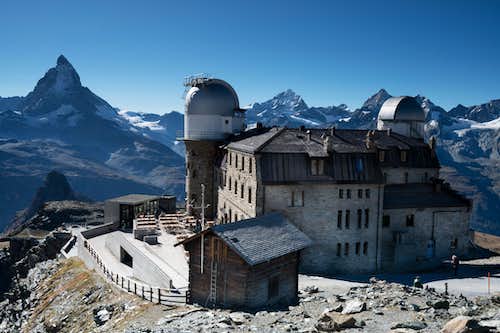 Gornergrat Observatory
With a couple days of acclimatizing above 10,000' I left Kim and Spencer behind in Zermatt and headed up to the famous Hornli Hut. I'm not a soloist, so this climb had me thinking a lot before hand- a nervous trepidation was rolling thru my mind. I knew exactly what the climbing difficulty was, and what altitude it was at, and felt comfortable about soloing it in principle. It wasn't until I got to the hut and scoped out the first hour or so of the route did a feeling of comfort and confidence come back to me. 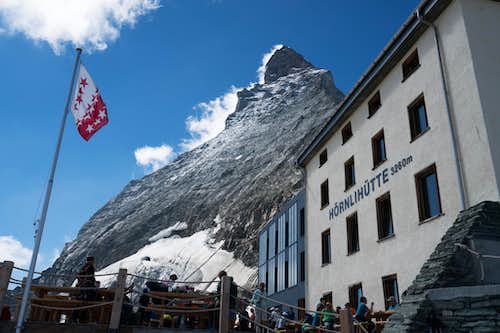 Hornli Hut
I was fortunate to enjoy a meal with an English guide and his client as well as a swiss climber- together we talked about the route, and our plans the following day. The guide filled me in on the chaos in the morning- the local guides will go first, but if you're on the ball and ready you might as well get yourself close to that door, as there isn't really a set pecking order when going out, just who's there and ready. The swiss guides are all over this and prep their clients to eat fast and be ready. I was dressed and ready to go @ 5:10, looking back I should have been more aggressive in the line when the hoard of people left the breakfast table. As it happened I left the hut in the middle of the pack (70 climbers or so). 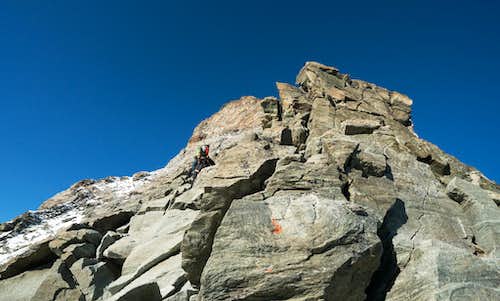 Matterhorn
You'll find the fist bottle neck 10 minutes from he hut- a steep vertical section with ropes and a few steps here and there. I probably waited for 25 minutes before zipping up this section. Because I was soloing I was able to pass slower teams a lot easier than those that had ropes between them. There were a few guides who had stronger clients that simply waited in the hut till the bottle neck was clear and started climbing around 6AM. Most everyone else was out the door ASAP. After an hour or so there was a degree of separation between most teams. I was able to keep up to a few of the guided teams, and simply followed them up the ridge. Route finding is paramount on the Hornli ridge- there are NO carins up there, the guides must knock them down as carins would make it too easy for people to climb the route without them. There are numerous dead end side spurs one will be drawn onto. When the guides scooted ahead I didn't find the route finding too difficult, though my speed did decrease significantly in places. For the majority of the climb up and down I followed guides and their partners. 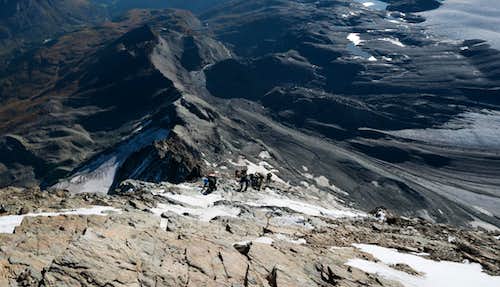 Matterhorn
Once leaving the hut a good indicator of how long it will take to climb the route is the time you arrive at the Slovay hut- it's about halfway. I was pleased to arrive there 2 hours after leaving the Hornli hut. The crux of the climb is below the hut, a short section of 5.4 climbing know as the lower Mosley Slabs. There's bolts scattered about the route, as are ropes. The route would definitely have a different feel to it if these aids were not in place. Just above the shoulder is another section that has ropes and is vertical in nature, by the time you're up there the altitude will be affecting you as well- this upper section felt the most physically challenging while lower down had the stiffest climbing moves. 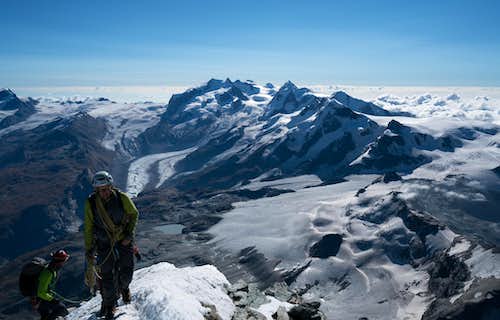 Matterhorn
Once above the shoulder you'll experience some exposure and au chaval style moves across ridges- the views are spectacular. Higher up on the route my pace slowed, the limited acclimatization was showing its face; I found myself being passed more often as I rested and caught my breath- though I wasn't the only one slowing down up there...With clean skies and sun shining all around I found myself atop the Matterhorn a little before 10AM. The views down into Italy and the paranamic view of the Swiss alps are a sight to see. 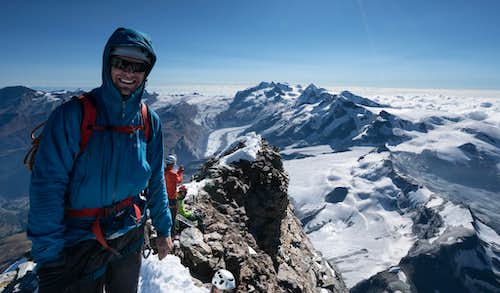 Matterhorn Summit
After resting and taking some pictures thoughts of the descent and hopes of making it back to Zermatt that night were front and centre. Shortly after 10 I started the descent down. All in all it took 4.5 hours to climb up and about 5 hours to descend down. I carried a 30 meter rope with me and had 6/7 rappels on the way down, while the rest was down climbed. There are a couple spots were a 40 meter rope would have speed up the process. If I was with another climber I probably would pack a 40, otherwise the 30 was just fine. Once back down at the Hornli hut I quickly grabbed my items in the storage room, bought a chocolate bar and a coke, slammed them back and bolted for the last cable car to Zermatt. With 25 minutes to spare I reached the Schwarsee Paradise station at 4:20 and was back in Zermatt pulling the boots off shortly after 5. 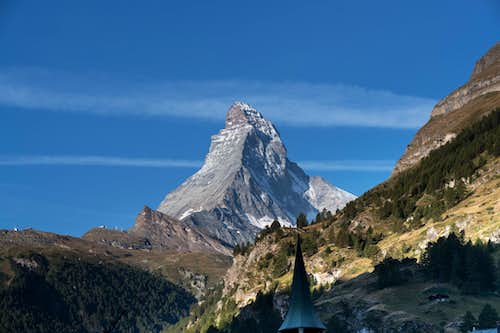 Matterhorn
Here's a view of the Matterhorn 5 days after we rolled into town- the snow had melted off the East face a lot in the week we were there.

All in all the climb was great. The gong show that takes place while leaving the hut doesn't detract from the climb, it's just part of the experience. The guides on the hill were definitely focused on their clients, but also accommodating when they realized they were about to be passed. The price to stay at the Hornli hut is steep, as is everything in Switzerland. If given the option I'd climb the route again in a flash- though that North face line would be the first option, if there's ever a next time in Zermatt.

Hope this TR helps anyone who's looking to climb the Matterhorn!

Approach Notes:
From Zermatt take the cable car up to Schwarzsee Paradise and then hike to the Hornli hut.

Great read and congrats. Wonder if we'll ever see gong shows of that nature on the Island.

Thanks! Was a memorable time in Zermatt...there was a weekend up on Arrowsmith when 3 teams were on Newman-Foraker ice climbing- fortunately we had the best truck and drove closer to the trailhead than the other two teams. Otherwise I'd say no- on Vancouver Island mountaineering is a different sort of experience.

I'm not into too many gong show type climbs, but The Matterhorn has always been a dream of mine. It was great to hear your experience on the route. Well written and nice pictures too. Thanks for posting!

Concise report and thank you for the report on the "gong show". That detail about climbing Matterhorn has always turned me off about it. I'll reconsider my desire to climb it and also will most likely give it a go solo...thanks again.