Maunga Terevaka from Ahu a Kivi 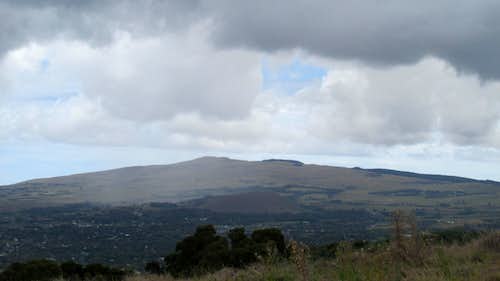 Wednesday Dec 24 2014.  Maunga Terevaka from Ahu a Kivi trailhead.  Class 1 moderate slope on a shield volcano.  Some class 2 on the sub-peaks.  The trail appears to have been created by vehicles driving as an informal road.  The signs at the trailhead now indicate only foot traffic allowed.  Terevaka is the highest point on Easter Island.  Of the three main volcanoes on Easter Island, Terevaka has the easiest and most established trail to the summit. 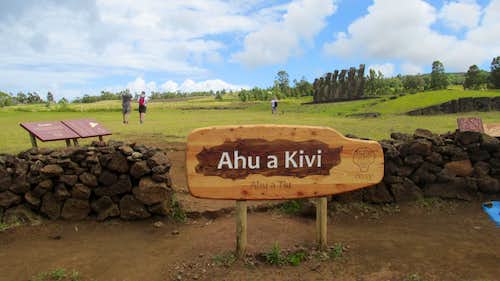 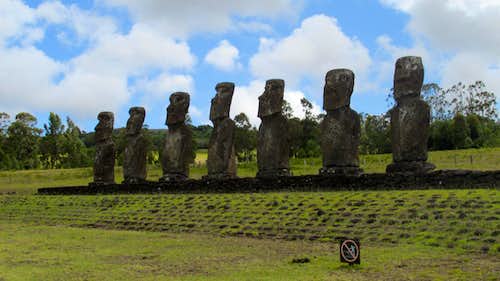 We walked from our lodging on the north side of Hanga Roa to the trailhead. Whether driving or walking you’ll need to find your way to the Ahu a Kivi site. Beware, the road pattern on various maps never seems to exactly match real life!  It took us about an hour and 15 minutes to walk from Hotel Tekarera.  The marked trailhead is on the same driveway and to the right of Ahu a Kivi. 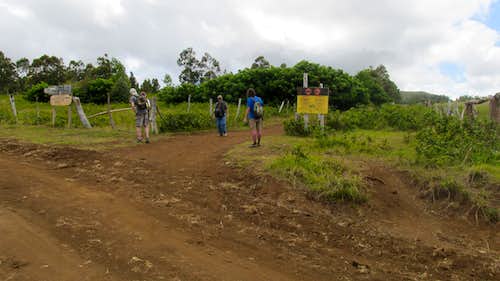 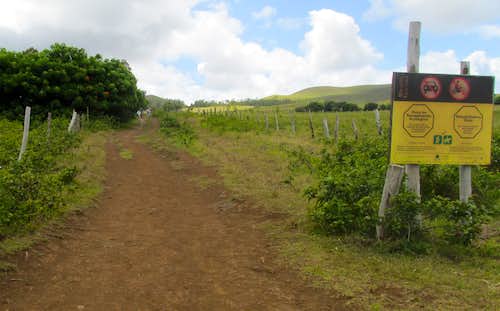 After taking some pictures of the seven Moai we started up the trail at about 10:10 am. 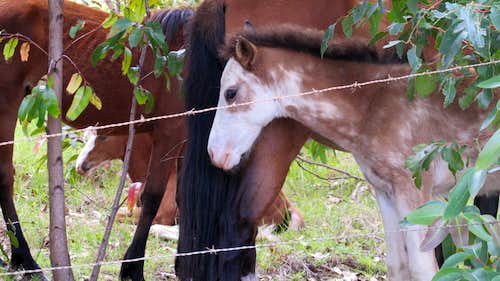 There were some horses in a fenced field on the left.  The trail makes a left turn after not very far and then follows a generally northerly direction to the summit.  It took about an hour and 20 minutes to hike to the summit.  The return could be quicker but there would be no point in that?  We took our time enjoying the view and checking out the prominent subpeaks. 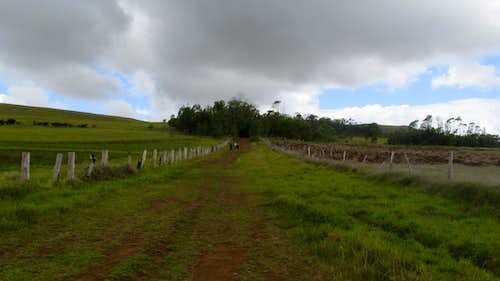 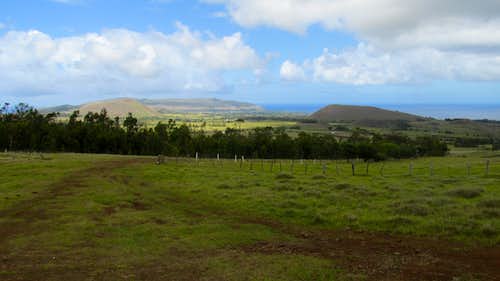 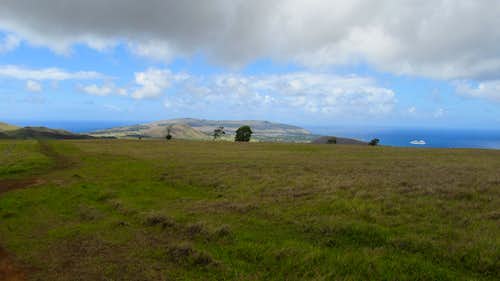 On the way up we kept turning around for views of Rano Kua to the south with Hanga Roa in the foreground.  Anchored just offshore was a large cruise ship.  Higher up we were able to see Maunga Pua Katiki off to the east.  There are several apparent high points ahead with no obvious indication which is highest. 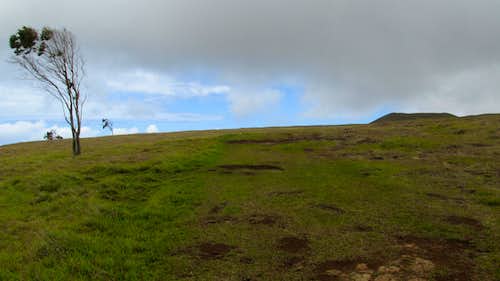 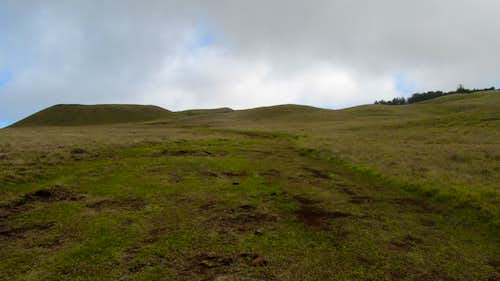 There is a large patch of trees off to the right on an apparent high point, but the trail eventually gets above those.  At around 1200’ there is a intersection in the trail.  We stayed straight and a bit left instead of making a right turn.  The trail stays in between some of the high points and several free-range horses noted our passage. 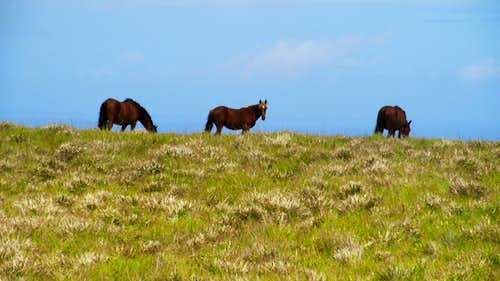 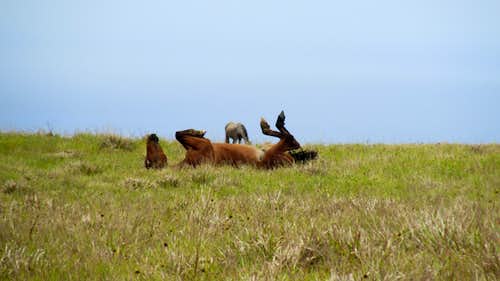 Eventually one of the points was indeed the highest and marked by a pile of rocks and sticks.  A cairn raised above the center of the pile in declaration of the highest point on Rapa Nui - Easter Island. 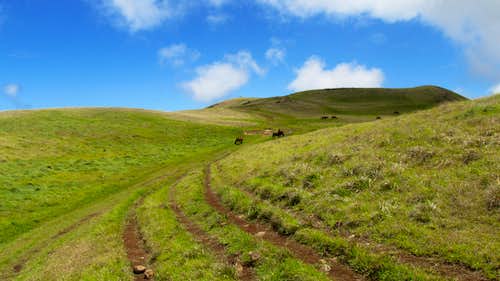 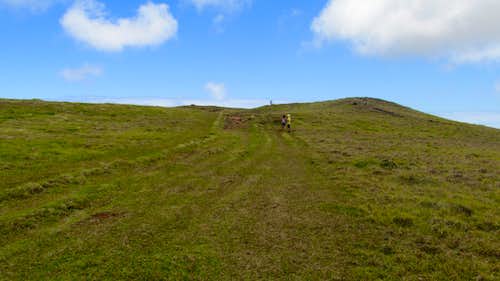 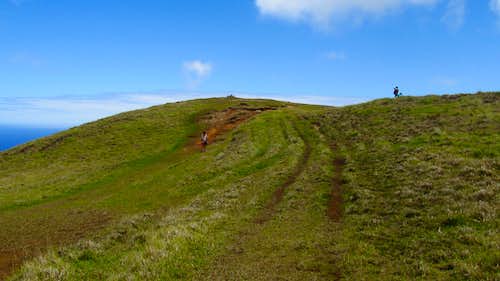 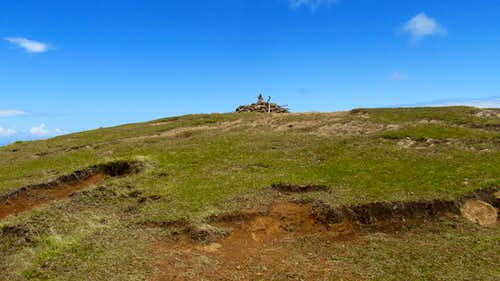 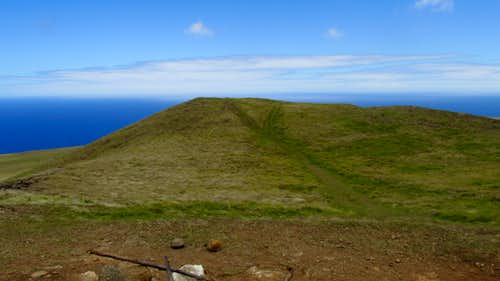 Teravava has a few additional summits worth checking out.  Beyond the summit to the north is another bump, not quite as high we felt the need to hike over to.  The low point between the two was a great place to have lunch and get out of the wind. 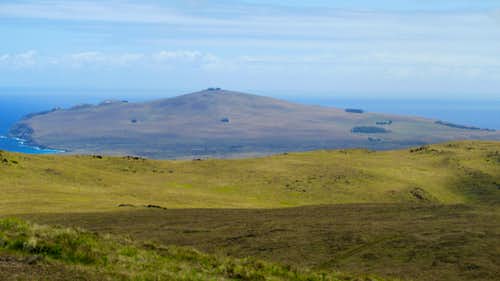 But the real treats are the two summits with craters that can be visited on the return.  It’s not even apparent they have craters unless you hike over to them.  From below they appear to be just a couple more nondescript high points. 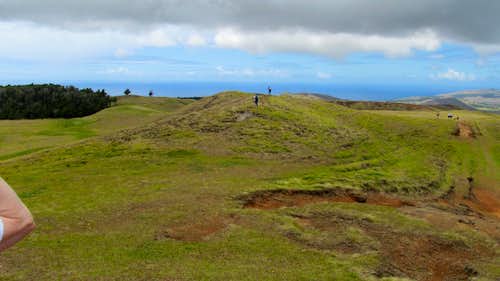 From the summit we stayed to the left (east) of the main trail and hiked over to Maunga Puka 468 m, 1535'.  It only takes a few minutes and you get to see a small crater with a tree in it. 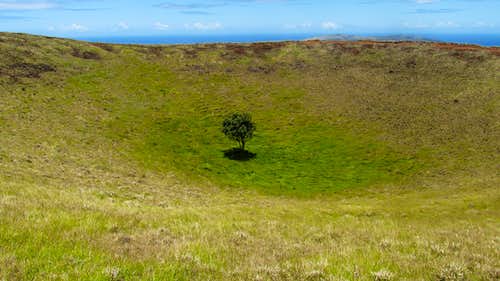 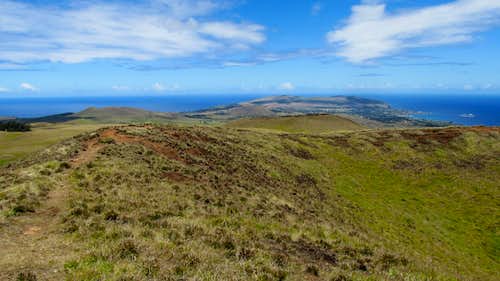 We could see this horse watering hole to the north from Maunga Puka. 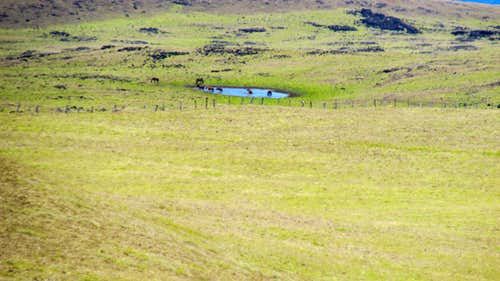 After circling the Maunga Puka crater clockwise we then headed southwest over to Maunga Kuma 470 m, 1542' to a bigger rougher crater. 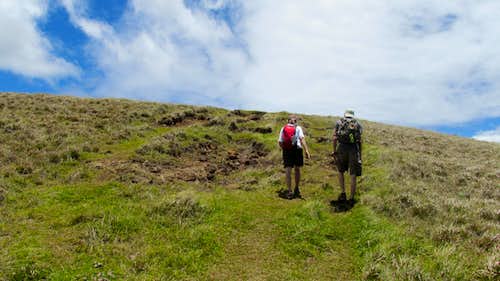 We circled that crater counter clockwise, seeing a grouse on the way, before returning to the main trail. 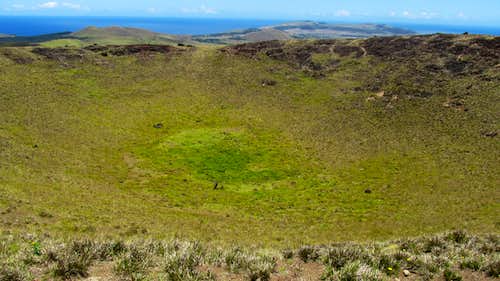 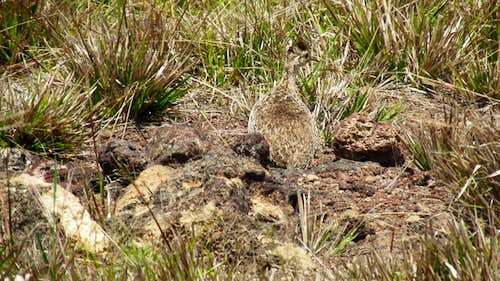 Looking back at Terevaka from Maunga Kuma 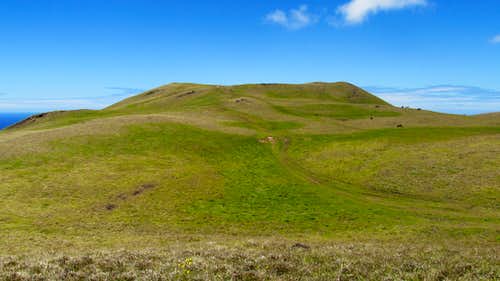 The trip down went a bit quicker than the trip up. 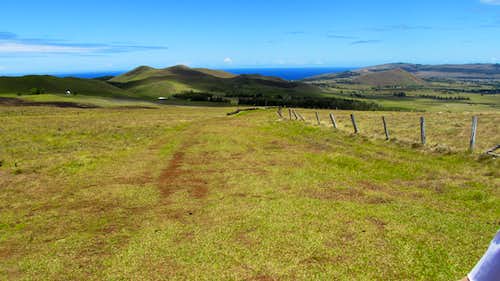 We bought a few souvenirs at Ahu a Kivi before hiking the longer road along the shore back to town. 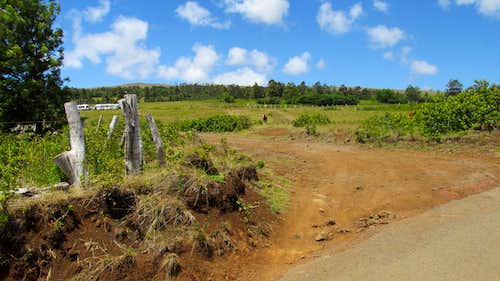 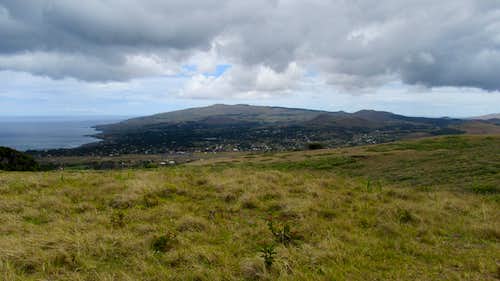 We stayed at Kainga Nui cabin at Hotel Tekarera.  Our host Paul picked us up at the airport.  Paul drove us around town pointing things out to get us oriented.  The next day Paul was our guide for a full day tour of island.  Paul is very knowledgeable of the history of Easter Island.  As a teenager in the 60s he worked with archaeologist William Mulloy on Easter Island.  Paul is American but spent much of his adult life on Easter Island married to a native Rapa Nui.  We spent 6 nights on Easter Island and could easily have spent another week. Although you can take a guided vehicle (recommended) to really see Easter Island you need to do a lot of hiking.  We rented a vehicle from Paul for 2 days to facilitate our travels around the island.

Money changing: There are a couple ATMs in Hanga Roa, the only town on the island.  We didn’t use them but changed our money at the gas station - PUNA VAI Mini Market - just off the main street on the south side of town.  The exchange rate was reasonable and we exchanged on a few occasions.  The rate can change daily.  The gas station also has a large wine selection!  If you have time in Santaigo you can get a better rate there.  Downtown in the Central Banking District, on Agustinas between Ahumada & Bandera is a row of Money Changing storefronts with their Buy / Sell rates posted outside.  We made it a point to have US dollars in good shape.

Map: Prior to going to Easter Island I ordered the International Travel Maps - Easter Island (Chile).  It's a pretty good map with 20 meter contours and a 5 minute grid and 1 minute grid ticks. I used a straight edge to make a one minute grid.  I wasn't able to identify the datum. The shift between the map and WGS 84 was mainly in longitude.  My GPS has an Easter Island 67 datum that might have been a bit closer than WGS 84 but was still shifted in longitude.  On Easter Island I was able to pick up a couple more glossy tourist maps that were also good to have.  You will notice inconsistencies between real life and the road / trail patterns on the island.  I get the impression the less constructed roads and trails have migrated a bit over the years.  There are also contradictions with the elevations between the maps and various websites.  This is especially true with Maunga Pukatikei, the volcano that anchors the eastern side of the island. You will also see inconsistency in feature names.  Sometimes is English / Spanish / Rapa Nui - Easter Island / Isla de Pascua / Rapa Nui.  Other times native names will be broken in different places with or without apparent spelling differences:  Pukatikei / Pu a Katiki / Pua Katiki.  Have fun!

Weather:  We had highs in the 70s and lows in the 60s all week.  On a couple occasions there was a light sprinkle.  I wore shorts and a tshirt the whole time. Even on the windy mountain tops it never got real cold.   Some might want a jacket so it would be prudent to pack one.  Sunscreen is a must!  A hat for the sun is recommended.  I wore trekking shoes on the hikes and they were sufficient.  Hiking boots would have been good, especially on Rano Kau.  Do not recommend only being in sneakers.  There are some places, especially on Rano Kau where the horse grass is tall, the trail isn't established and the surface underneath is rough.  There are no water options on the trails.  Be sure to pack at least a couple liters, or three liters if you'll be taking a scenic way back!