This impressive and beautiful range is located in the NW corner of Yunnan province, W of Deqen Xian. The area is ethnically mostly Tibetan with large Han Chinese influences. Before the upgrades of the Yunnan-Tibet Highway the area was very hard to reach and weeks had to be spent on travelling on winding mountain roads with frequent landslides.

The most famous peaks are:
Kawagebo/Kawa Korpo a.k.a "Virgin Peak", "Prince Peak". – at 6740m, it is the highest peak of Yunnan. Kawa Gebo means " God of Snow Mountain" in Tibetan.
Mianzimu - 6054m. One of the most beautiful mountains in the world. Still unclimbed, highly technical and extremely good looking, it's one of the most saught after targets.
Jiariren-an - 5470m. A long ridge with no defined summit. Steep walls makes any attempt a real challenge.
"Peak 6509"/"Meili Xue Shan II" – 6509m. The second highest summit in the range. 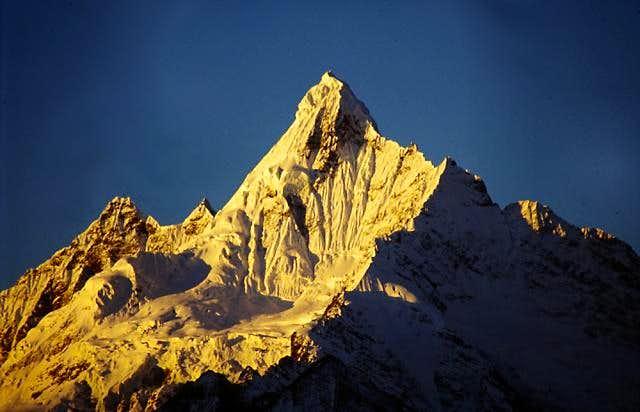 The first rays of light hit Mianzimu on a clear and cold December morning.

Kawa Gebo
Since 1902 (British expedition), mountaineers from China, Great Britain, the U.S. and Japan all have failed to conquer the summit.
Japanese climbers tried in 1987 and 1989 but failed.
In 1991, 17 mountaineers from China and Japan lost their lives while trying to reach the peak, a tragedy which is amongst the worst ever in history of mountain climbing in China.

The Sino-Japan joint climbing team were very close to the main peak - Kawa Gebo when it began to snow heavily. The team were forced to abandon the climbing plan, and the whole team died on the way of returning to 3’rd camp at 5100 m.
Some of the bodies were not found until in July, 1998.

According to the tales of the area, the monks at a local monastery felt offended by the fact that human beings were on the way to tread on holy ground and started an almost three week long prayer session in order to stop the attempt.
Kawa Gebo is the highest of the peaks holy to the Tibetan people and has an almost equal status with Kangrinboqe Feng (Mt Kailas) in the matter of “holiness”.
Tibetans in general, believe it was blasphemous enough to tread on holy ground and the failure of the expedition was a divine intervention and would have happened with or without the prayers of the monks.

“Peak 6509” was attempted in 1993 by an American team, but was aborted at approx. 6100m due to avalanche conditions, a snow wall and a cornice that was blocking the access to the ridge.

Jiaren-an has been attempted by Chinese mountaineers, but they have all failed according to local sources.

Mianzimu, seen from a distance, the most difficult-looking peak is as far as I know also unclimbed. 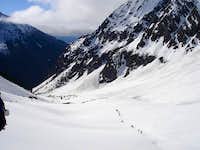 Trekking in the area

Kunming has an international airport and it’s a normal way of arriving in Yunnan. Direct buses run all the way to Zhongdian, now re-named to Shang-Ri-La. No it’s not a joke! It’s the new official name of the city, all in order to attract more tourists.
From Zhongdian there are buses for Deqen. It’s a long ride on bad roads and it’s a good idea to acclimatize a bit in Zhongdian before heading for the bus ride which takes you over a couple of 4200m passes.
Deqen is a 20 min vehicle ride to a pass with small hotels, overlooking the whole mountain range.

If you are in central Tibet/Xizang, you can obtain a permit to travel all the way from Lhasa to Meili Shue Shan. It's a long and very hard trip over two 5000m passes and at least eight 4000m passes on partly very bad roads. There are no buses or other transport which run all the way in one go. Either you rent a jeep (expensive!) or do the travel in steps. Be prepared to wait for long times, sometimes days for connection buses.

Before setting off for a hike or any other activity in the mountains, you better buy all necessary provisions in Deqen. After leaving the city, you will only find very basic stuff in the small villages en route.

Waltraud adds:
The Meili Shue Shan massiv can also be accessed from the North through the WiChu valley. WiChu is a prominent tributary of the Salween. A gravel road follows the WiChu river towards the South from the town Zuogong. The road goes all the way to the village BiTu, some minor villages with small shops are on the way. BiTu can basically be accessed by jeep (not in early 2005, as the road was under major construction...) .
From BiTu on it is horse trails to the village LaDe, which lies on the Kora trail around Kawa Karpo. The trail is very narrow and allows spectacular views down in the narrow gorge of the WiChu river and offers great views of the Meili Shue Shan range.
From LaDe it is a 2000m ascend to the crest of Shu La.

Along this route, BiTu is the last village with a store offering basic food supply. It takes three to four hiking days from BiTu over Shu La to the Mekong valley.

The area was long closed to foreigners without special and hard-to get permits.
In 1996, Deqen County opened up a bit and it was possible to travel there with an "Alien's Travel Permit", which could be obtained for a small fee in Zhongdian's PSB (Public Security Bureau) office.
Nowadays the whole of Deqen County is open.

Climbing permits.
The policy has changed from time to time when I have visited the area, but according to the most recent information I have, it’s not allowed to climb any of the peaks and the same sources state that all the peaks are unclimbed.
When I pushed the issue with the local PSB, I was told to apply at the CMA (Chinese Mountaineering Asociation) in Beijing. They gave me a close to zero change to get the climbing permit for any of the peaks.

Sunrise over Kawa Korpo and the rest of the Meili Range

The weather in the area can be very unstable in early spring and summer to early fall.
From mid fall, through the winter the weather are usually much less irratic and clear skies dominate.

When to climb - see the red tape section.

A Tibetan woman walking a Kora

You can pitch your tent anywhere in the area, even if it's officially prohibited in China.
Pilgrims are sleeping out in the open or bring primitive tents and the authorities in the area don't seem to mind where you pitch your tent.

If walking around the massif, you're often invited to sleep in the villages en route and some places have very basic hotels.

Trekking in the area. 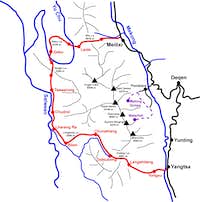 As the massif is a holy place for the Tibetan people, it is customary for them to walk around it, in a so called Kora.

The circumnavigation of the whole massif can be done in a 11-13 day long hike along sometimes dangerous footpaths.
Parts of this path were once upon a time used as a transportation route for tea.
Starting from Deqen, it is roughly 300km and it takes the pilgrims up to a month to walk around the massif.
First you cross the Mekong River/Lancang Jiang at Yangtsa and continue towards the 4478m Doker La/Pass.
A long downhill takes you all the way down to the Salween River/Nu Jiang. The path goes uphill again and there are quite a few lower passes before you arrive at the northern end of the massif and the highest point, which is at Shu La/Pass 4815m.

The area is full of glaciers. They are of particular interest as they reach all the way down to a low altitude. Mingyuchia Glacier and Sichia Glacier stretch down to the forest at an elevation of 2,700 meters and you can sit there eating wild strawberries and listen to parakeets on the edge of the glacier. The longest glacier is 11.7 kilometres long and covering an area of 13 square kilometres. It feeds a gurgling tributary of the Mekong.

These two maps from Nelles are not very good when it comes to details and correctness, but they can serve as guidelines for overall planning.