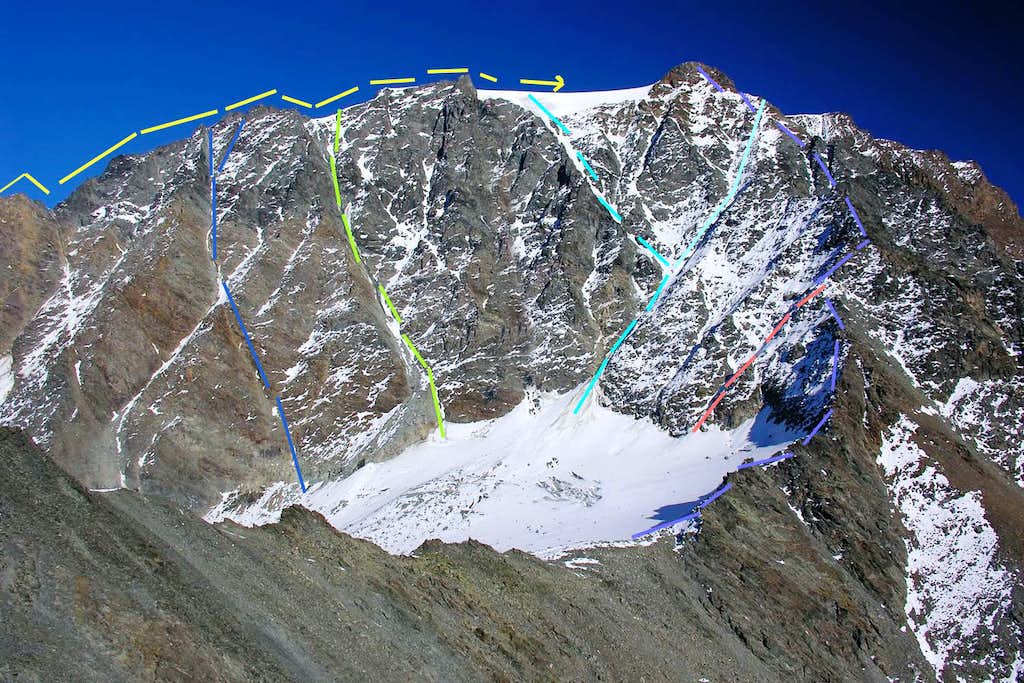 Western Face of Mont Velan (3734m) above the Glacier de Proz From left or North: North-northwest Ridge from Petit Velan and Dents de Proz up to the Quota 3670 meters and V'lan 's Summit also Ice Cup (3731/34m; in yellow; August 1897, in ascent). First couloir from North or "Northern Couloir", even named by the ski-mountaineers as "Ypsilon Couloir": to the North-northwest Ridge just before and in right in respect to the Top of Aiguille du Velan (marked with blue color in picture with rocky basal variant on the first 330 meters about ; August1877 in descent, July 1966, in ascent). Note: if you want to carry out the entire ascent, or the descent on skis, with the snow, use the left or North basal branch that goes up parallel in the first 330 meters, forming together with the previous variant a sort of basic rocky triangle (not traced, but evident). Second couloir from North or "Central Couloir": to the little saddle 3607 meters, in left just below the Summit of Aiguille du Velan or with exit out more in right to the rocky wall of Quota 3670 meters (in springgreen; August 1877 in descent, July 1966, in lonely ascent). Third narrow and vertical gully from North: into the rocky wall of Quota 3670 meters (not marked because not yet climbed both uphill and downhill). Fourth couloir from North also called this as "Ypsilon Couloir" or "Annibal Couloir": even this known with the first name (see above "First couloir from North"), by the mountaineers of Years '70, while currently is more used as "Annibal Couloir", by the ski-mountaineers- The same goes up to the more large saddle between the Quota 3670 meters and Quota 3678 meters (in azur; at the end of Years '80, in ascent). Moreover the deviation more to the right or South is called and known as "La Virgule" also "The Comma"; the same, progressively fletting left, reach the Quota 3678 meters doubling rigth the top of this altitude. Fifth couloir from North facing South (way of the first absolute ascension): in the vicinity of Aiguille du Déjeuner (3341m; in fuchsia; August 1799, in ascent). Western Ridge also called "Hannibal 's Crest": from the homonym Col (2992m): to the Quota 3678 meters (in violet; Summer 1826, in descent,).
Photo by emilius Traced by osw
« PREV NEXT »