Monte La Caccia rises abruptly only a few kilometers from the coast of the Tyrrhenian Sea, in vicinity of the calabrian town of Belvedere Marittimo. Its rugged summit ridge runs from west to east and comprises the true summit (1,744 m) and two false summits (1,708 m and 1,680 m). The south face of the mountain presents a steep wall of rock that, from the feet of the mountain to its crest line, rises up for about 700 m.

Because of its proximity to the Mediterranean and the associated temperature fluctuations the whole mountain range receives a good share of condensed water. In winter copious snowfalls are rather frequent. The spectacular view from the summit stretches from the mountains of the Sila (south) to the Lucanian Apeninnes (north). To the south-east one can see the Ionian Sea and the Gulf of Corigliano, to the west and the north-west the azure waters and the coastline of the Tyrrhenian Sea up the Gulf of Salerno. On clear days it is possible to spot Stromboli and the Aeolian Islands, as well as Sicily and Mount Etna.


There are several interesting and varied hiking and scrambling routes leading to the summit. Two of the main routes follow either one of the mountain's main ridges (south-west, south-east). Especially the quite impressive south face should offer interesting climbing routes, too. However, the rock quality is mostly precarious. Indeed, available information about alpine routes in the Southern Apeninnes suggest that it has not been climbed through, so far. 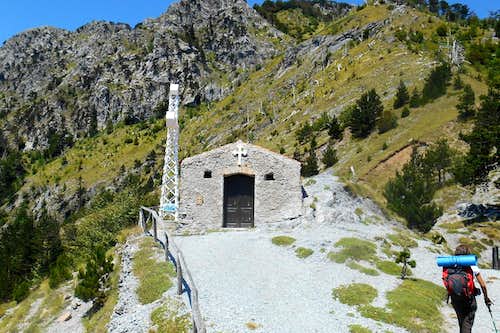 The Chappel (Serra della Croce)
The south-east ridge is one of the main routes to the summit. It starts rising in the vicinity of the mountain hut "Rifugio Belvedere"*, right behind a small chapel built on the col between Serra della Croce and Monte La Caccia. Although there is no signposting, a narrow footpath is leading up to the steep and grassy slopes of the first false summit. Most of the bigger rocks and the slick limestone slabs can be evaded by simply bypassing them on the right. 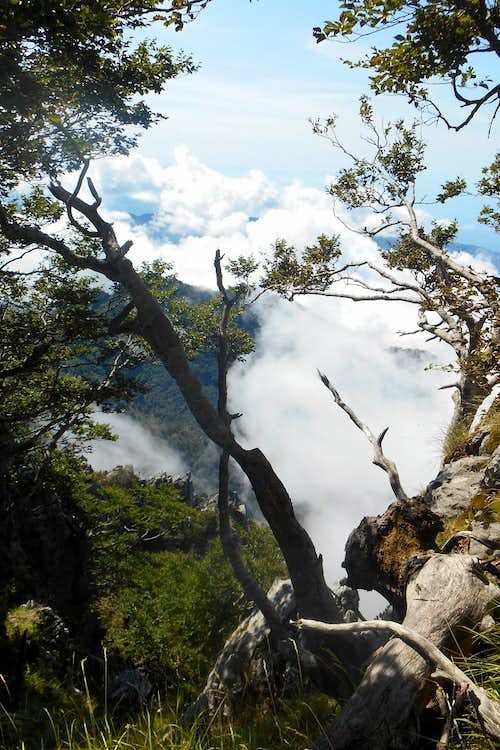 View from the summit ridge
Once reached at the foot of the final slope, instead of climbing up in direct line it is recommendable to traverse it in a western direction (left). After having crossed a small, scree filled couloir, continue for about 100 metres and look for the col between the first and the seconde false summit. Here the slope's reduced inclination will allow you to reach the summit ridge more easily.

Note: Make sure that you memorize this spot. During the descent, especially with suddenly incoming fog or low clouds, serious problems with orientation may arise, as it is very easy to miss this small indentation and, subsequently, mistake one of rocky extensions of the summit cliff for the south-east ridge.

Turn left and follow the summit ridge in a western direction. You may either stick to the rocky spine of the ridge itself and scramble your way up to the true summit or enter the forest to your right and pick up the footpath that circumnavigates the steepest parts.

Right beneath the summit the ridge is broken up by a deep and brushy recess. The easiest way to cross it and avoid the thick vegetation is by traversing the huge trunk of a dead beech tree which may serve as a natural bridge.

*The mountain hut itself can be reached on a sporadically signposted hiking trail that starts at the base of the south-west wall, in vicinity of a location called Trifari, where the asphalt road ends.


Also this route starts at the location Trifari (730 m) and partially uses the main hiking path that leads up to Serra della Croce and the mountain hut "Rifugio Belvedere". Where the path flattens look to your left for a crag descending from the mountain and a stone cross. Leave the path, scale the crag and follow it up to a point where it joins an extension of the actual south-west ridge (alt. 1,237 m).

Now turn right and look for a narrow footpath which descends a few meters and traverses a small couloir before ascending again, always in an eastern direction. 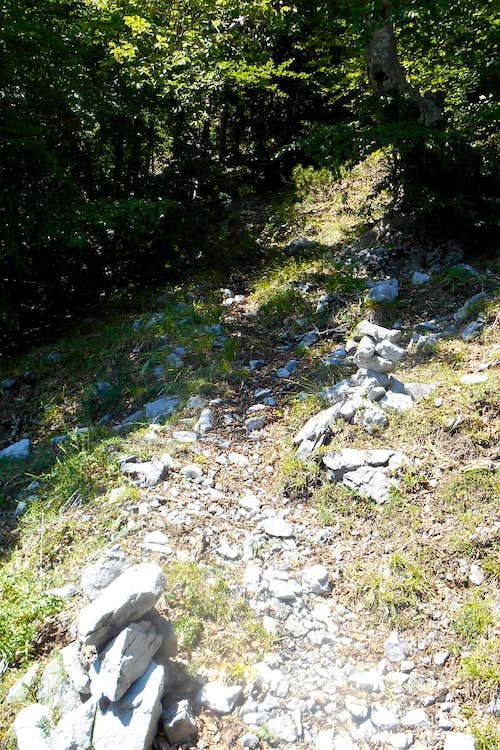 Footpath to "Sella La Caccia"
From the mountain hut follow the trail uphill to the small chapel. Instead of ascending the south-east ridge, take the broad hiking path to the right. This path is circumnavigating the east face of the mountain and finally leads to the mountain pass "La Melara" (or "Passo della Melara"), i.e. the col between Monte La Caccia and La Montea. 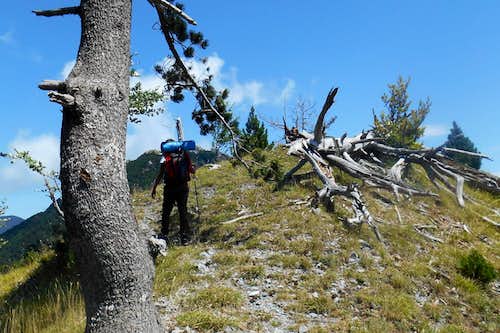 Towards the nameless elevation
At the first bifurcation you encounter turn hard left and follow the hiking path that skirts the eastern slopes of the the mountains and is gradually rising.

Recommendable detour: Heading straight instead, where the forest opens the ridge of a narrow and nameless elevation offers some fine views on almost all the major summits of the Montea Group: La Montea (1,825 m), Monte Faghitello (1,432 m), Serra della Croce (1,420 m), Monte Petricelle (1,758 m) and Monte Cannitello (1,464 m). Do not descend the steep slopes! Any of them will eventually lead to very hideous and almost vertical terrain. Turn around, go back to the divarication and continue on the hiking path that enters the forest, now on your right.

After several gentle bends you should notice to your left a breach in the vegetation and the onset of a narrow and steep footpath. (Look for a red dot on a large boulder and a small cairn right at the edge of the forest.) This path leads up to a col called "Sella La Caccia" (alt. 1,591 m) which connects the north shoulder of Monte La Caccia with the south shoulder of Monte Petricelle.

Once on the col, turn south (left) and find your way through the beech forest to the summit ridge. Follow the summit ridge or the narrow footpath in a western direction (right) until you reach the true summit, marked only by a heap of rocks. 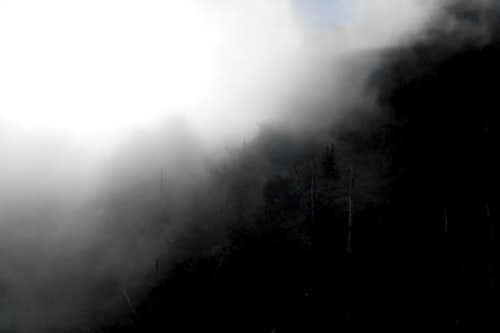 Although being a quite interesting alternative to the main ridges, there is no trail, path or whatever to be followed and no useful signposting at all.

Watch out for a conspicuous recess in the westernmost parts of the summit ridge. Keep direction and ascend the broad couloir. In the couloir, its best to keep on the left side in order to avoid the steepest parts which are filled with scree.

Exit the couloir and scale the ridge. Follow it in an eastern direction (right) up to the summit. For a somewhat less steeper descent route you may choose between the south-west ridge (2.) and the south-east ridge (1.).


Note: All indications for this route are approximative and an approach should be avoided in case of adverse weather conditions (fog, imminent rain etc.) or dubious weather forecast.


A Few Landmarks and Impressions


The nearest town center is Belvedere Marittimo. From Naples it is a 3 hours ride (about 250 km) on the highway A3 Napoli-Reggio Calabria. Take the Exit "Lagonegro Nord" and follow the state road SS585 south, in direction Maratea / Praia a Mare. At Castrocucco take the state road SS18, again in a southern direction (Scalea). Keep following indications for Belvedere Marittimo.


The Pellegrino massif, and hence Monte La Caccia, is an integral part of the 'Pollino National Park'. With a total area of 1,960 square kilometres it is the most extensive national park in Italy. The park was officially founded in 1993. The same rules and regulations apply as for any other national park in Italy. 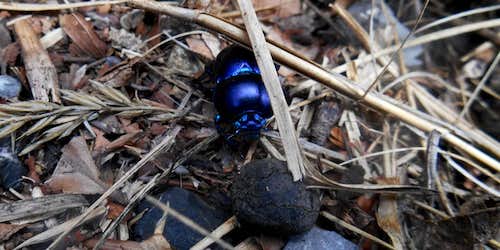 Free camping is generally not encouraged (in other terms: it is not allowed). However, it might be tolerated from dusk until dawn and as emergency bivouac. No open fire etc. will be tolerated, though. There are no fees or permits required.


Monte La Caccia can be climbed all year round. During the winter months it might be a good idea to bring ice axe and crampons. The ridges, escarpments and steep ravines enclosing the mountain from all sides can pose serious difficulties with orientation. Trails are signposted insufficiently, and low clouds are rather frequent.

Especially on the main ridges the trails are not signposted at all and can become incognizable. Expect lush vegetation and lots of loose terrain. The overall rock quality is moderate to pretty bad. Daytime temperatures in the summer months can be taxing.


Accommodation can be found easily at Belvedere Marittimo. A small camping site is situated about 600 metres from the town center, too. There are countless accommodation options to be found in the small towns along the coastal road. 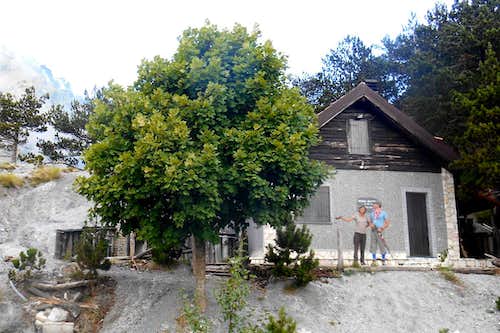 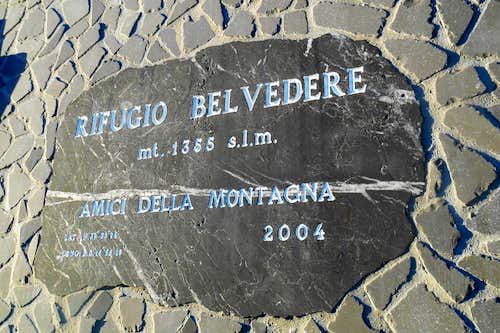 Rifugio Belvedere (1,355 m)
Best choice for an ascend of Monte La Caccia or an exploration of the deep ravines and the summits of the Montea Group is, without any doubt, the neat mountain hut Rifugio Belvedere. It is situated at 1,355 m and can be reached using the hiking trail which leads from Trifari, a component locality of Belvedere Marittimo, to the summit of Serra La Croce (1,420 m).

The spacious mountain hut has a fire place, a lavatory and an outside toilet. Non-potable water for cooking is available from a rainwater cistern. Drinkable water can be found at a wellspring on the trail to Trifari, descending for about 20 minutes from the hut. The attic is equipped with quite comfortable campbeds and has room for ten guests.

The mountain hut is unguarded. There is no service and you may find the hut locked or occupied. Should you be planing on staying at the hut it might be necessary to contact the association Amici della Montagna beforehand in order to pick up the key. - (Tel. 338 2527985)


As already pointed out before, the Orsomarso mountain range is still a pretty wild spot. Signposting is insufficient, or absent, hiking trails are often discontinued or hard to decipher. A good sense of direction is required in order to avoid getting lost or into trouble. Leaving or loosing the trail means almost certainly negotiating very steep and almost impassable slopes on loose terrain. Unfortunately, to this very day there is no official hiking map available. 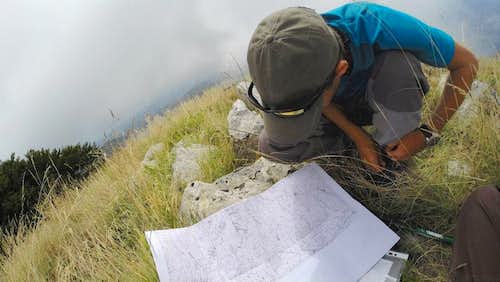 Orsomarso range with IGMI - photo: G. Cosmo
The whole region has been mapped in the 1950s and 60s by the "Istituto Geografico Militare Italiano". These maps, called "tavolette" (1:25,000), provide all information about geographic features, elevations, major trails etc. They are still indispensable for anyone frequenting these mountains or any other range of the Southern Apennines. A new edition is still in the making. Both original and new edition can be ordered here. 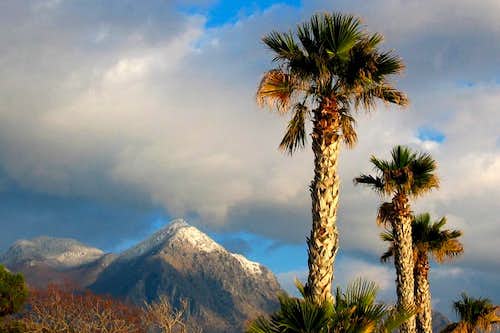