Montenegro instead of Italian Alps

Every year I aim to have a “big” mountain climbing. For me “big” means that 1 or 2 days are dedicated only for mountains, and for such mountains that have certain kind of importance for me. This wish may look to be strange for people living in the middle of a mountainous area or nearby. But I leave relatively far from good from big mountains. I try to take every kind of opportunities for hiking and climbing, but most often I have to “steal time” for it.

For example during business trips. During business trips I often visit mountains nearby the visited office. In the weekends. Or from the airport between 2 flights. You can see examples for this here. My last such kind of “performance” was that I climbed Musala (2925 m, highpoint of Bulgaria and highpoint of the Balkan-peninsula) in a 6 hours slot of a business meeting.

Other examples for “stealing time” for climbing are when I’m on holiday with my wife. She doesn’t like if I do my own business when we are on holiday together. But still I have to do my own business. I don’t know why, but somehow all our holidays are very near to an interesting mountain ;). Consequently I have to climb that. Usually I climb that early morning, with extreme speed: between 4 a.m. and 9 a.m, including approach to trailhead and return to the house where we stay. So we can have our breakfast together. Win-win situation.

But in reality not this is what I dream about. I prefer to devote a few days only to my mountains, without constraints. I have an agreement with my wife that every year I can spend 4 consecutive days for this. Generally I utilize this opportunity in Augusts. And now August 2010 arrived…

Montenegro instead of Italian Alps

Most often I plan my big tour to the Italian Alps. I planned the same for 2010: I planned to climb Monte Vioz (3645 m) in the Ortler Group, and other 2 peaks over 3000 m in the nearby Presanella Group that can be reached with 2 interconnecting via ferratas.

This was the plan. The reality was that on the days when I had my booked holidays, extremely bad weather was forecasted for my planned destination. I checked other opportunities, but the whole area of the Alps had very bad forecasted weather.

Then let’s see a Plan C. Where is the weather good in Europe, near to my home (Hungary)? The nearest places with good weather were in Romania and in Montenegro. I presented the opportunities to my regular climbing friend, Attila. No luck: he said he was not interested in mountains on the Balkan and he doesn’t want to go to any of these countries. I felt a bit desperate. What to do now? My father loves travelling, and very quickly I could convince him to go with me on a 4-days-long tour. I asked him to select the destination that he more prefers. He selected Montenegro.

As most of the SPers are from the USA and not everybody can know the most recent events of European history and geo-politics, I think better to mention that Montenegro is not a mountain or mountain range: it’s a very small county in Europe. It was an independent state between 1878 and 1918. And it’s again independent since 2006.

I was a bit afraid of travelling to Montenegro: we had to cross Bosnia-Hercegovina that was in war for long time and still there is stress. And also Montenegro sounds a bit suspicious. But the many beautiful pages about mountains in Montenegro on SP encouraged me to go.

And what to visit there? My initial thoughts was that I should climb the highest peak of Montenegro and the highest peak of Bosnia-Hercegovina. The first confusion was here: what is the highest peak of Montenegro? As much I knew it, it was Bobotov kuk (2522 m) in Durmitor. Most books and internet sources (including Wikipedia) tells it. But I learnt from SP that in reality the highpoint of Montenegro is Kolata (2528 m) in Prokletije, on the Albanian border. Vlado (vvujisic) adviced on his page to apply for permission from the Border Security Department before climbing it. As I hate contacting any departments before climbing. I dropped this mountain. I decided to go into Durmitor. After intensively surfing on the web I found an on-line map of Durmitor. I printed it for myself, and signed the many peaks that are on SP already. I found that they are not very far from each other. So if I spend 2 long days in Durmitor, I can climb 11 of them! Instead of climbing 3 high peaks in the Italian Alps I would have many-many smaller ones in Montenegro! In the meantime I dropped the idea of climbing the highpoint of Bosnia: I found no online map about it. Now I had the plan. 3 days later we started our trip. 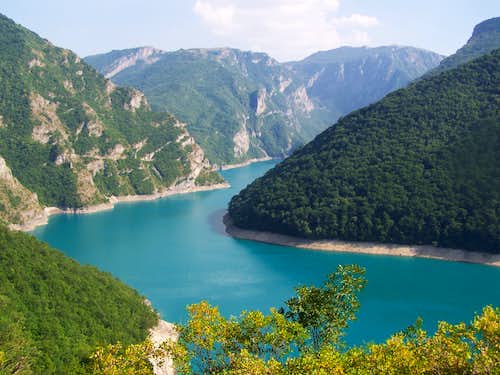 Hungary doesn’t have a border with Montenegro. Not even with Bosnia-Hercegovina. In order to get to Durmitor, we had first to cross Croatia, then Bosnia-Hercegovina, and finally to drive 80 km in Montenegro when finally we reached Zabljak where I booked a very cheap hotel (Hotel Planinka **, in very bad condition but with good food). The distance was not so big, 550 or 600 km. But the roads were not 1st class roads, and we crossed borders 3 times, so it took 11.5 hours to get there. Big effort, but the scenery as Montenegro welcomed us was already promising.


The two days of hiking, scrambling and climbing 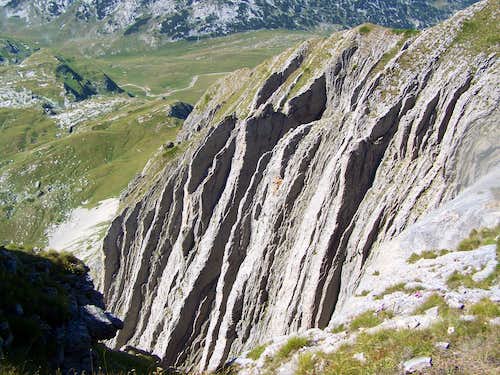 The incredible Prutaš
My father is around 70 years old and he didn’t want to climb with me. But he was so kind to take me to the trailhead in the morning of the first day. I started my tour at Sarban water spring at altitude 1708 m.

PEAK 2 - Gruda (2302 m)
Gruda is just nearby Prutaš. No trail goes up on it. Since a while I’m interested in climbing peaks without trails leading on it. It was a good opportunity.

PEAK 3 - Devojka (2440 m)
From Gruda I climbed back to Prutas, almost to its peak. Then I descended to Veliko Skrcko lake. Then to pass Solmar, and from there to the pass Velika Previja. The home-made map I had was not the best so for the first time I couldn’t identify Lucin vrh that was just right to me. So I continued my way and climbed Devojka from eastern direction, along the ridge connecting it with Bobotov kuk. It was a hard scrambling, I guess grade UIAA III, with many loose pieces of rocks and with high exposure.

PEAK 4 - Lucin vrh (2396 m)
From Devojka I already understood the situation better and I descended to the pass Velika Previja again and walked up Lucin vrh.

PEAK 5 - Bobotov kuk (2522 m)
It was the main peak of my tour. I was alone on the peak. Very likely I was the last on the peak this day. I tried to continue my way to the last peak that I planned for this day – Bezimeni vrh – but I didn’t find the signs how to get over. So I descended again to Velika Previja, and I took the shortest way to Zabljak. It was a long way, and I had to cross a few snowfields on my way. But finally I was back in the hotel and I could finish the day with a cold beer.


On the second day I started my tour from the saddle called Sedlo. I wanted to do a round tour with 5-6 peaks. 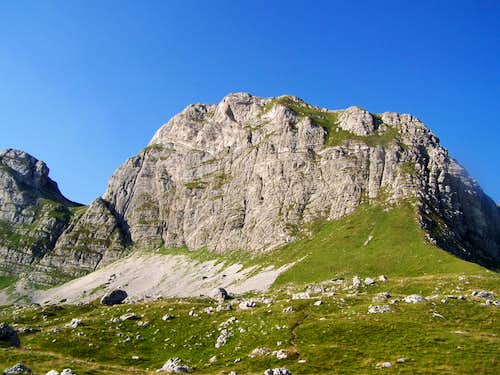 Uvita Greda
PEAK 6 - Uvita Greda
The first peak – Uvita Greda - was so close to the marked path that I had to climb it. There was no path leading to it, but it was still very simple.

PEAK 7 - Bandijerna
According to the map a marked path was leading to Badijerna. In reality there was nothing. Still it was easy to find a way to the peak.

PEAK 8 - Terzin Bogaz
Perhaps the most difficult part of my second day was to go over from Bandijerna to Terzin Bogaz. According to my map there a path connected the 2 peaks. In reality there was nothing. So I decided to take the shortest way. First I walked in the hillside of Bandijerna. It was steep but not so difficult. Then I arrived to a highland formation. This highland was shaped intensively by karst activities. There were many deep crevices in the rock plateau: in average with 10 meter depth, with snow down there, and with 1-2 meter width. I had to cross approximately 20 of them. It was manageable, but as I was far from places where normally humans stay, I imagined that in case of any accident I would have been found 10 years later. If ever… But finally I crossed this difficult part and I could climb Terzin Bogaz. 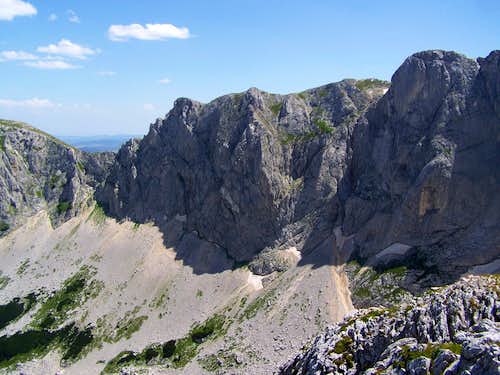 The challenging wall between Savin kuk and Sljeme

PEAK 9 - Savin kuk
From Terzin Bogaz I descended to a small rescue cabin at the place called Velika Kalica. From Velika Kalica I tried to climb Savin kuk. From this side it has a near vertical wall. But there was a path leading there, so I hoped there would be a way up. At a point the path went to2 directions. One approached the wall. I started climbing there but soon I gave up. Though the top was not so far, the wall looked frightening, I was very tired, and moreover I lost my map and psychically it was not good. I was in the middle of Durmitor, not having any map, and inventing new ways. Not very wise. I decided to return to my starting point, on a similar way as I came here. But avoiding the more difficult parts. With this decision I didn’t performed what I wanted: I climbed “only” 8.5 peaks in 2 days instead of the 11 peaks that I planned. But still I was satisfied: in the 2 days I walked approximately 40 km, and my summarized elevation gain was 2850 m.

When I returned home and looked to SP, I found that our SP friend Peterbud, was in Durmitor – partially on the same peaks as me – and almost in the same time: he left Durmitor on that day when I arrived there.

Congrats for this TR, that encourages me even more to visit one day this area !

Thanks for your congrat! Yes, courage is needed to plan a trip there! Though finally it looked to be safe, I try not to imagine what treatment one would get in case of an accident...

And did you see the attached photo related to the topic "churches in mountains"?

not yet but I'll look for it !

What was very surprising to me that the area was full of French people - can you give an explanation for that? :))

oh really ! :( so if I go I'll have nothing exceptional to tell to my relatives ! Tatras and their crowded trails are wilder for them perhaps :))

it would be my turn to write a TR :) but I guess that will be a long time till then. It was funny that we exchanged each other by chance.