Mount Brown is the highest point of the larger mountain mass known as East Butte in the Sweet Grass Hills, just south of the Canadian border on the plains of northcentral Montana. Unlike the highest point of the Sweet Grass Hills—West Butte—whose main summit and lower hills are synonymous, Mount Brown is only one of several named peaks which make up the East Butte complex, and "East Butte" may also refer to the rounded peak just to the east of Mount Royal, south of Mount Brown. In general, the Sweet Grass Hills are really a loosely connected island range of small volcanic mountains rising some 3000 feet above the prairie below, and offer fantastic views for hundreds of miles.

The route up Mount Brown begins from the north, gaining about 2,600 feet in 3 miles over grassy ridges and steep talus, but with nothing more difficult than ambling up steep slopes of somewhat loose rubble. 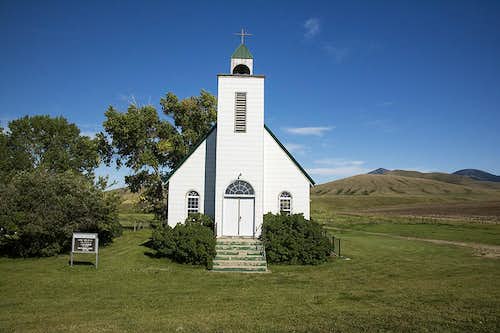 The pointed peak of Mount Brown in the Sweet Grass Hills as seen from the tiny town of Whitlash.
Reaching the start of the hike up Mount Brown may be more arduous than the climb itself. The trailhead begins in remote, sparsely populated country only 5 miles south of Montana's border with the Canadian province of Alberta. If the road is dry a two-wheel-drive vehicle will be all that's needed, but adequate clearance will make the ride a lot easier. From Great Falls, drive northeast on Highway 87 to Fort Benton, then north on Highway 223 to the small Hi-Line town of Chester. From here, drive west a few miles on Highway 2, then turn right onto the gravel Whitlash road (Road 409). Drive north for a long, long way (about 35 miles) and watch East Butte draw closer. The road will turn west and pass just south of small, conical Haystack Butte, then turn north again.

Eventually you'll reach the tiny town of Whitlash (population 12 in 2013, pending a new schoolteacher). Admire the church and turn right at the end of town onto the Black Jack road. You'll drive about 8 miles from here to the trailhead, and there's one tricky point to staying on the correct path. At about the 4-mile point, the road will reach a four-way intersection, with the most well-maintained track going left (north), and another good road heading right (south) leading to a ranch. But you'll want to keep driving straight (east) onto the more rustic dirt road. This is actually still the Black Jack road, and after a few more miles it'll turn south toward Mount Brown, and in about one more mile you'll be at the well-signed BLM trailhead. 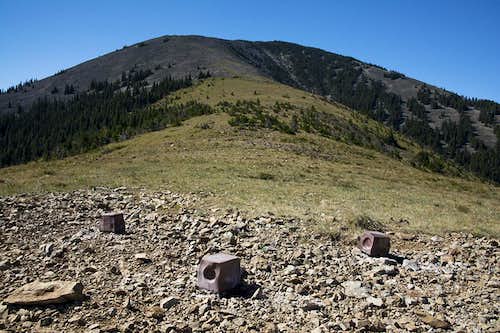 Load up on salt before heading to the top.
The route to the summit is straightforward; the peak itself can be seen from the trailhead. Pass through the gate and follow a faint two-track past grazing cattle, ascending a low ridge ahead of you. This is rattlesnake country, so watch your step in any tall grass. At the top of the ridge, meander slightly to the west then proceed south to the next connecting east-west ridge. From the top of this ridge the view south will make it look as though you'll have to lose most of the elevation you've gained in order to reach the next set of ridges, but instead walk east up the ridge and around its rocky south side to connect to a long, gradually ascending ridgeline that leads all the way to the main mass of Mount Brown. Hike up this ridgeline, walking from hump to hump for solid footing and great views along both sides of the range, or side-hilling to shave off elevation loss between humps. As you go, examine the square summit blocks on the rounded dome of Black Jack Butte to the east, and watch for West Butte's peak to appear above the grassy ridges to the west.

When you've ascended the final grassy hump which connects to the north ridge of Mount Brown, you'll be confronted with the toughest section of the climb. The grassy ridge soon gives way to loose talus on the steep north slope of the peak. Hike up, using the grassy lanes until they run out, then ascend whichever way seems easiest. Lots of well-worn game trails criss-cross the talus field diagonally, offering slightly better footing. The talus isn't too bad, actually, and once you reach the high shoulder of the ridge, you'll be rewarded with a return to grassy slopes and lower-angle climbing. Ascend toward the timbered summit ridge and pick your way through stands of lightning-blasted trees to the top, angling slightly south as you move upward for easier going through the trees. To your east, the conical peak of Mount Lebanon comes into view, with the Great Plains stretching endlessly on to the horizon. The named East Butte and the flat top of Mount Royal will peek out to to the south, and the larger island range of the Bears Paw Mountains can be seen in the distance if haze from farming or forest fires isn't too thick.

The actual summit might seem like a bit of a letdown, as it's completely in the timber, but this actually makes for a pretty interesting experience. The high point is marked by a USGS marker set into a square block in a small clearing. A few fire rings can be found here as well, along with a rarely-signed summit register in an ammo canister. Murders of crows and tons of moths and butterflies may fill the air above the summit, and sunlight will peek through into the little grove. To enjoy the views you've earned, just traipse through the trees a bit. To the southwest, a large talus field opens up to reveal the view south to Mount Royal, East Butte's next-highest peak. Its flat top is littered with radio shacks and transmission towers, and an access road snakes up its west flank. To the west, the sharp cone of Gold Butte, the high point of the Hills' "Middle Butte," can be seen, and due west of you is the entire ridgeline of West Butte and its satellite hills rising spectacularly above the prairie. 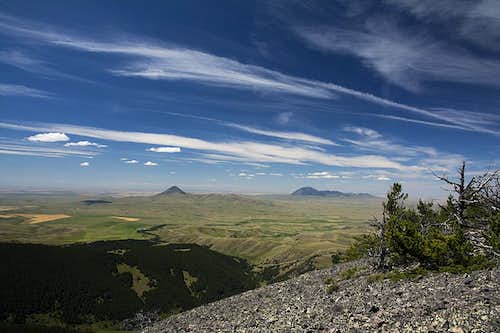 Conical Gold Butte and the broad summit of West Butte, as seen from just below the summit of Mount Brown in the Sweet Grass Hills.
Hopefully you've brought binoculars, because beyond West Butte to the west the entire line of Montana's northern Rocky Mountain Front can be seen, as well as most of the peaks in the eastern half of Glacier National Park. On a clear day it's possible to pick out many of the notable peaks in the park, including Rising Wolf, Going-to-the-Sun, Siyeh, Merritt, and others. It's an amazing vantage point from which to take in so many familiar landmarks in a single view.

On your return from the summit, stop for more great views once you're out of the summit trees. The view north is amazing in its own right, as checkerboarded farmland sweeps north as far as the eye can see. You'll be able to pick out your rig at the trailhead, and not far beyond it a cluster of small lakes and farms below the flat hump of Ikes Butte. Just north of the butte an invisible line sweeps east to west—the 49th parallel, marking the U.S.-Canadian border.

Follow the same route on your return, and enjoy the pleasant stroll down the grassy ridge, drinking in great views all the way. Keep an eye peeled for deer as well as elk—East Butte is home to a herd some 450 strong. 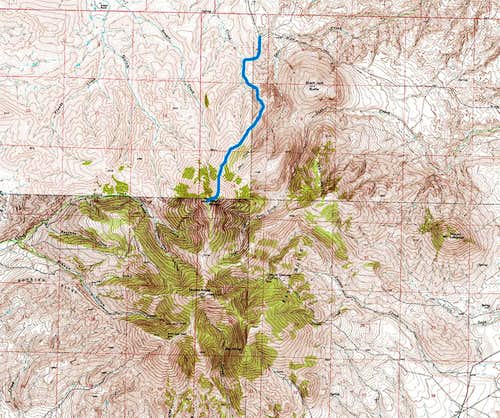 The north ridge route to the summit of Mount Brown.
The route lies on BLM and state lands, but is surrounded to the east and west by private land. Please be respectful of these boundaries if you wander farther east or west during your hike. A small sliver of the grassy ridge appears to lie on private ground at the point where it meets the steep talus slope of Mount Brown, and aiming to the east will keep you on public ground.

Summer months are obviously the ideal time to climb Mount Brown, although the peak is certainly attainable any time of year. The road may be tough to navigate in winter, however, and gravel roads in northcentral Montana are notorious for becoming impassable gumbo when wet even in summer, so make sure you have a clear weather window accounting for your drive in and out.

Hunting is permitted in the area, so plan and dress accordingly if hiking in the fall, and respect hunters' rights as well if you see them.

Bureau of Land Management Info on East Butte. The BLM 1:100,000 map is an excellent resource to all of the landmarks in the area, and is highly recommended for navigating both the peak and the roads leading to it.