Located three miles northeast of San Luis Obispo, East Cuesta ridge marks the southern terminus of the Santa Lucia Range. A fire road, restricted to foot and bike traffic, climbs from Cuesta Pass on highway 101 to the crest of the ridge. Mount Lowe is the first named peak you'll come to on this road. It is also the only named peak on the ridge with a summit that doesn't require significant bushwhacking to attain.

The summit itself is not particularly remarkable, in fact it is only one of several high points along the ridge. The views however, make this peak worthwhile. Due to its position off the main ridge, the summit offers sweeping vistas of endless ridges in almost every direction. The summit is home to a communications tower. The higher portions of Cuesta ridge are covered in dense pine forests, a welcome contrast from the dry chaparral the area is known for.

East Cuesta ridge road marks the southern boundary of the Santa Lucia Wilderness, a small tract of pristine land that protects the upper reaches of Lopez Canyon. The canyon is quite scenic and lush, at least by San Luis Obispo County standards. Decent backcounty camping can be found in the canyon by Lopez Creek. 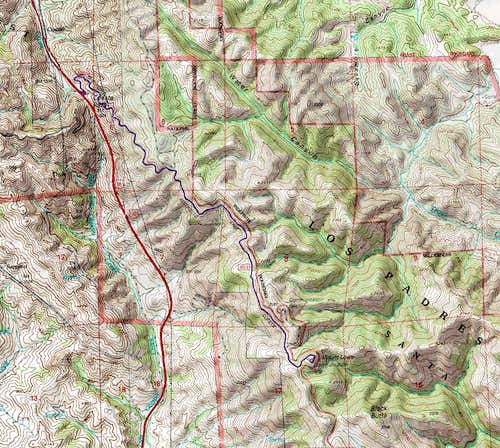 Mount Lowe Map
From the south (San Luis Obispo), simply head north on Highway 101 to get to Cuesta Pass, pull off at the gravel parking lot on the east side of the highway. Coming from the north (Atascadaro) drive past Cuesta Pass, to one of several turn around areas, then back track to the Cuesta Pass pullout.

The route to the summit follows a fire road that climbs to the crest of Cuesta ridge. This road is shown on some maps as the Mount Lowe road, on others the East Cuesta ridge road. The hike begins by paralleling the highway, slowly climbing the ridge.

As you climb higher views of the coast open up. To the west the chain of volcanic plugs known as the Nine Sisters/Moros are visible, specific peaks include Cerro San Luis Obispo, Bishop Peak, Chumash Peak, Cerro Romauldo, and Hollister Peak. Farther off Moro Bay is visible. Higher up the scenery begins to change, Live Oaks give way to pine forests.

About 3.5 miles in the road crosses the crest of the ridge. A four way junction is located here, to the left a road leads to an unnamed high point crowned with a radio tower, the views from which are decent, but inferior to those from Mount Lowe. Mount Lowe is now directly in front of you, it is the communication tower crowned peak just off the main ridge. From the Junction continue straight for another thousand feet to another fork in the road. Head left at this fork and follow the spur road to the summit of Mount Lowe. The hike involves 4.25 miles with 1200 feet of elevation gain one way and 200 feet of elevation loss.

Mount Lowe is located in the Los Padres National Forest. The road accessing the peak goes through private property, and a sign is posted stating that No camping or hunting is permitted for the first 2 miles. If you want to camp outside a designated campground you will need a California campfire permit. No other special regulations. 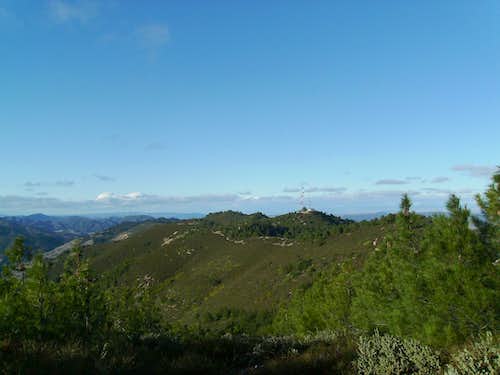 Back country camping is available in the Santa Lucia Wilderness. Sulfur Pots campsite and Upper Lopez Campsite are accessed from the Lopez Canyon trailhead, less than a mile down the fire road from Mount Lowe.

More inforamtion about camping in this area can be found at this link. 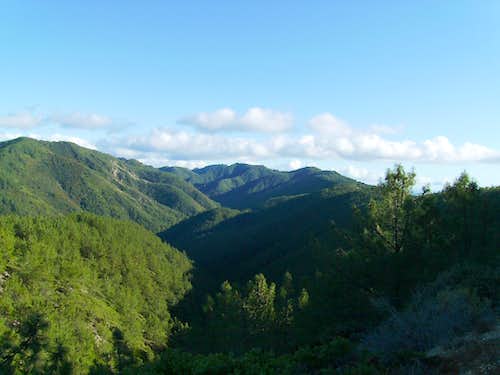