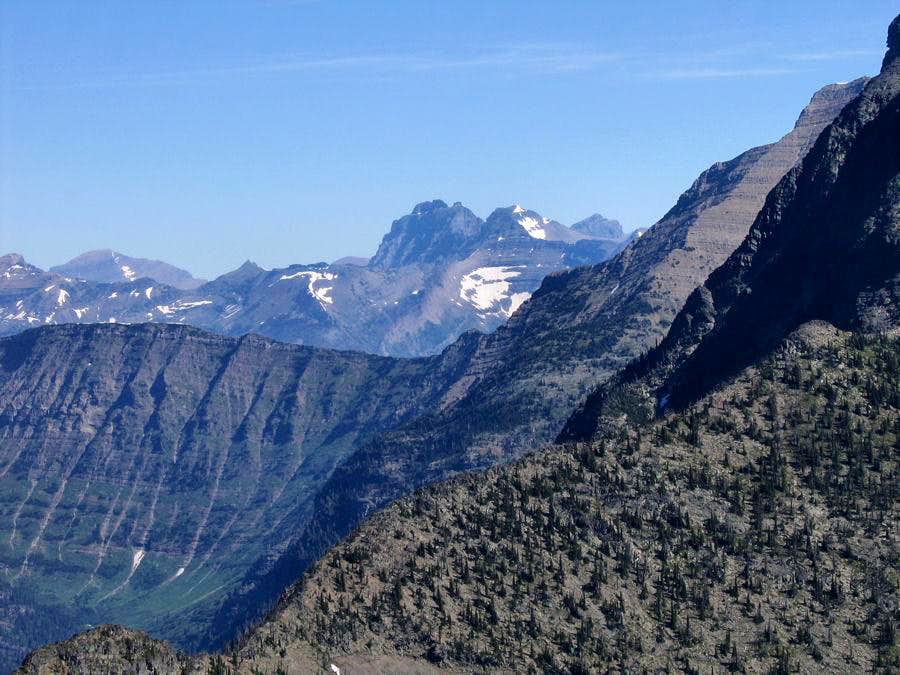 Nice perspective of Mount Merritt ("three-pronged" summit), and Ipasha Peak (with snow), while peering past shoulders of Stanton and Vaught. Photo by Vernon, July 5, 2007.
« PREV NEXT »

Yup, you are exactly right. This past spring and summer in Western Montana was, officially, the hottest, driest summer ever recorded—and that's just the latest in a substantial string of glacier-eating years! July averaged 2.5 degrees hotter than the previous hottest July; the day the above photo was taken set an all-time high temp mark in GNP for the date (I think it was 99 degrees, but don't remember exactly), and was so hot that Mike Hoyt & I had intended summiting Vaught from Stanton, but turned around on the Stanton summit due to the heat. It was brutal!

This in an area (GNP) in which the high country along and west of the Continental Divide "normally" (whatever that means at this point) receives Cascade-like snow, with precipitation averaging around 110" per year—translating to around 1000" of snow, but you have to remember that snow is colder and dryer than the Cascades, and the further inland summers are warmer.

By way of contrast to the above photo, check this shot out from mid-June of a couple years ago, which followed an only moderately mild winter, but was abetted by a cold, wet spring. Also of interest, there was a recent article in the paper referencing Gem Glacier in GNP, which for the first time in recorded history lost all its snow cover during the summer.