The highest of the Unicoi Mountains in western North Carolina, Huckleberry Knob has a few things going for it: it’s the highest point in Graham County, it’s the fourth most prominent mountain in North Carolina, it’s easily accessible, and it has excellent views from its summit.

Huckleberry Knob also has some interesting stories surrounding it. The earliest – and certainly the most dubious story – claims that some deserters from De Soto’s ranks once roamed the mountains nearby. The only evidence for this is a scrawled message located on a rock a couple of miles south of the Huckleberry Knob’s summit.

Another involves the Kirkland Bushwhackers, a particularly bloodthirsty band of outlaws that roamed the area around the Civil War. These men killed and robbed both Union and Confederate soldiers, as well as their own relatives (!). One of their best-known victims was Bob Stratton, for whom Stratton Bald – a mountain a few miles north of Huckleberry Knob – is named.

And how could any history of the Appalachains not include a drinking story? Apparently in December of 1899 two lumberjacks got hopped up on whiskey, proceeded to get lost, then froze to death on the slopes of Huckleberry Knob. In fact, several jugs of whiskey were located near the bodies. A grave memorializes these two young men near the summit. If you are to attempt this peak in winter, I’d recommend only bringing one jug of whiskey.

The fastest approach is from the Cherohala Skyway, a two lane road that runs between Tellico Plains, TN and Robbinsville, NC. While only 40 miles long or so, the views from this road rival the best of the Blue Ridge Parkway. From either Tellico Plains or Robbinsville, head towards the state line, and look for the Huckleberry Knob overlook, which is around mile marker 8 on the NC side. There is a parking area here, with good information on the trail that follows an old Forest Service road that goes through grassy areas and through a wooded patch to its terminus near the summit. From the parking area you will head north over Oak Knob (not named on the topo map) to the Huckleberry summit. The round trip is roughly 2.4 miles and entails about 400 feet of elevation gain. 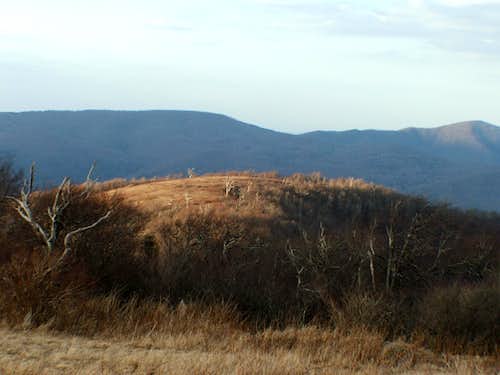 The summit is also accessible with a considerable amount of bushwhacking, but there are no other trails to the summit. I'd suggest the National Geographic map "Fontana and Hiwassee Lakes" map of the area if you're interested in a more challenging route to the summit.

Note that the skyway was not completed until 1996, and does not show up on USGS topo maps.

There is no camping within 100 feet of the Skyway. In other words, not much.

The area is located in the Nantahala National Forest, so camping is OK here. If I recall correctly, there is a fire ring near the summit.

If you'd like something a little more established, I'd recommend the primitive sites at the Santeetlah Hunter Camp. This is about a 30 minute drive from the Huckleberry Knob parking area. To get there from the overlook, head east towards Robbinsville. At the Santeetlah Gap area at the beginning of the Skyway, take the gravel forest road (FS 81) about a mile along Santeetlah Creek to your choice of 20 sites. This is a very scenic area and may offer a little relief from high winds and cold temperatures in the winter.

There are also a couple of pay campsites with 15 miles of Huckleberry Knob, including Indian Boundary, Horse Cove and Rattler Ford.

I've been here both in March and August. I'd recommend avoiding the peak of summer, as the growth and heat haze can obscure views in some places. The Skyway can ice up pretty badly in the winter, so check with the ranger district office (828) 479-6431 before heading out if the area has been hit with recent cold weather.

If you're a county highpointer, you can head west three miles from the Huckleberry Knob parking area to the Big Junction overlook. This overlook allows quick access to Haw Knob (Monroe Co., TN highpoint) and one of the two Cherokee, NC COHP candidates. The sunset views of the Unicois from the overlook are stunning. 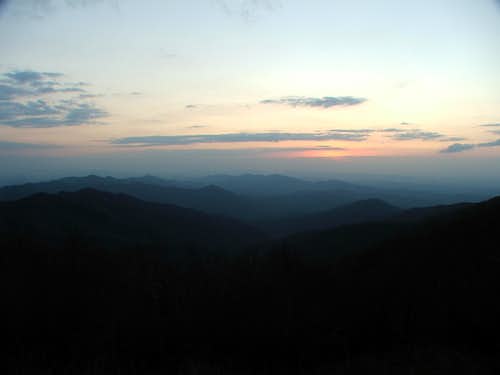 A few miles north of Huckleberry Knob is the Stratton Bald/Haoe Lead area. The summit of Stratton Bald is a meadow with a ton of wildflowers, while the views from Haoe Lead/Hangover Lookout are widely known as some of the best of Western North Carolina. When I visited, however, fog ruled the day so I have no pictures to set up a separate page.