West Butte is the highest point in Montana's Sweet Grass Hills, a small island range of volcanic peaks located on the Canadian border about 100 miles east of Glacier National Park. Although not large mountains by Montana standards, the Sweet Grass Hills are very prominent landmarks due to their relatively high elevations above the prairie. They can be seen from more than a hundred miles away in clear conditions, and likewise command excellent views of the surrounding country.

From Interstate 15 north of Shelby, exit at Sunburst and drive east on Nine Mile Road (Route 552). Drive about 18 miles until the road intersects with Coal Mine road at a T-junction. This is the beginning of the hike as approached from the west. Other routes to the top are also possible.

West Butte's prominence above the Great Plains affords visitors a commanding view in all directions. Only a few miles due north lies the Canadian border—the longest undefended international border in the world, stretching east and west far beyond what the eye can see. Just to the east of your perch are the triple summits of East Butte and the smaller conical peak of Gold Butte, with a thousand miles of high plains sprawling out beyond. To the southeast, the Bears Paw Mountains can be seen hovering on the horizon.

Due south the flat top of Square Butte and its smaller companion Round Butte can just be seen on a clear day, more than a hundred air miles away, with the pointy bulk of Highwood Baldy and the rest of the Highwood range to their right. Turning to the west is the most incredible sight of all, as nearly the entire length of Montana's Rocky Mountain Front sweeps into view from the south. The spiny range of overthrust summits guards the Scapegoat, Bob Marshall, and Great Bear Wilderness Areas just beyond.

The range eventually reaches the low point of Marias Pass, north of which lie all the peaks of Glacier National Park. It's remarkable to be able to pick out the prominent summits of Rising Wolf, Stimson, Going-to-the-Sun, Merrit, Cleveland, and so many others from such a great distance. Glacier becomes Waterton at the Canadian border, and the Rockies reel off northward into Alberta till they dip below the horizon.

Wildlife is abundant in the Sweet Grass Hills. You'll see deer, elk (and their frequent calling cards left along the trail) as well as the occasional moose. Raptors such as golden eagles can be seen riding the thermals above the peaks, looking for the various squirrels and other rodents on the ground.

Park at the intersection of Nine Mile and Coal Mine Roads and head northeast across the pasture below the butte. A deep, prominent scree-filled gully extends vertically up the southwest face of the butte, and the route up ascends the broad grassy slope just to its left. 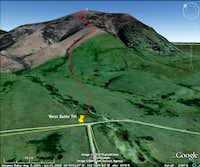 Climb to the top of this slope as it narrows and joins the main bulk of West Butte, eventually leading to a field of black talus surrounded by trees. A well-worn climber's trail leads up to the left and into the woods above.

Follow this trail up and pick a route tending northward through the trees till you reach larger open talus fields. A maze of interlocking game trails criss-crosses these upper slopes below the summit. Pick whichever route up through these seems most direct, and eventually you'll reach the grassy summit dome and its beautifully-constructed cairn.

Stroll around the perimeter of the summit dome for good views of the surrounding foothills while you're on top. If you'd like to see a bit more country, it's possible to take one of several alternate connecting ridges north of the direct ascent route when you're on your way back down.

West Butte lies on Bureau of Land Management property but access may cross private land. Please respect fences you may encounter along the way.

In north-central Montana high winds are prevalent year-'round, and winter brings the possibility of heavy snow and brutal cold. Even on a clear day weather can move in quickly; fortunately you'll have a good view of whatever's on its way by looking to the west. Spring through fall will be the best times to climb West Butte, but it's certainly climbable in any season.