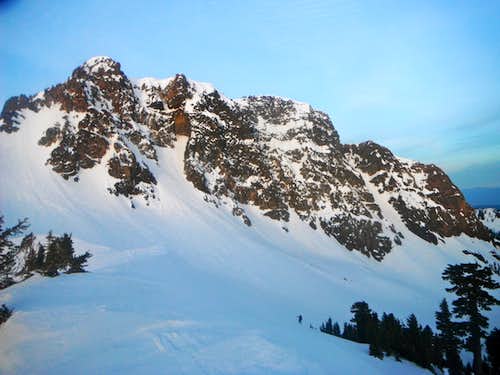 The north face of Brokeoff Mountain, Lassen Volcanic National Park. The Neutrino Couloir is on the far right hand side. 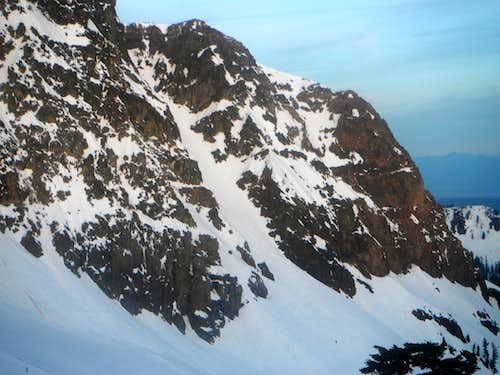 The Neutrino Couloir on the north face of Brokeoff Mountain as it appears on the approach from the east, April 2013
The most impressive feature of Brokeoff Mountain is it's precipitous north face. Across this steep and forbidding wall, the only weakness is a couloir hidden from view on the far NW edge of the cliffs. When viewed from points north such as Mt. Diller, it is easily distinguishable as the only uninterrupted line ascending the face. This is the Neutrino Couloir, a route for "just passing through" (inside joke for nerds) 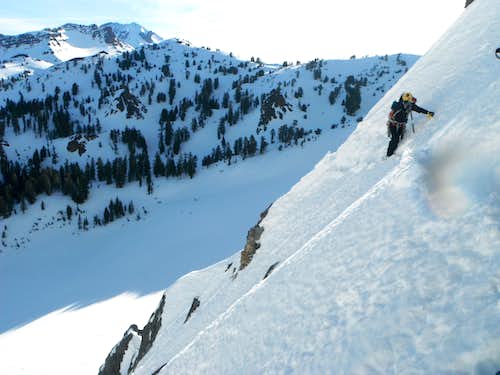 Making a rising traverse across the lower north face of Brokeoff Mountain en route to the Neutrino Couloir, April 2013
The best way to get to the start of the couloir is probably to walk up the road to the vicinity of Sulphur Works, then cut west on the south side of the stream. Climb uphill through the forest until you reach the saddle between Mt. Diller and the NE ridge of Brokeoff at approximately 8500', then descend to the foot of the north face and traverse over to the start of the couloir.
A second approach option might be coming up the standard Brokeoff trail from the south to Forest Lake, then continuing north then west over ever steepening ground until you gain the same 8500' saddle. 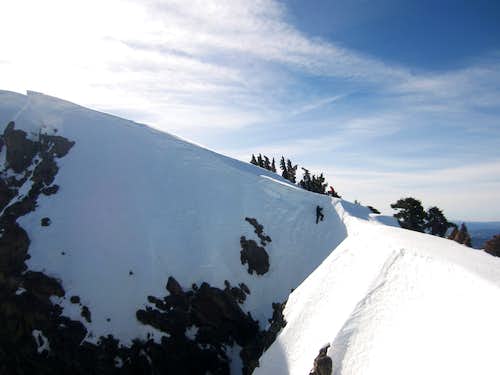 The impressive north face of Brokeoff Mountain and the exit of the Neutrino Couloir, April 2013 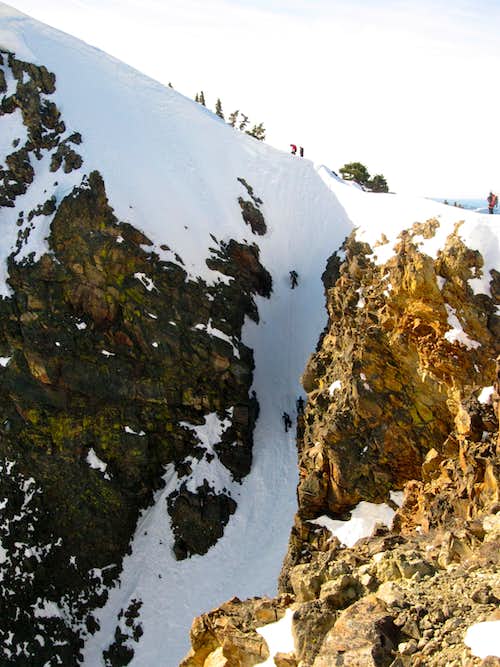 Exiting the Neutrino Couloir on the north face of Brokeoff Mountain. The angle approached 60 degrees at the exit, but most of the couloir was about 45 degrees. April 2013
The Neutrino Couloir is about 900 feet high and ranges from 45-60 degrees, with the steepest section at the exit of course. The rock lining the route is mostly broken and unreliable, but occassionally will accept small nuts or cams. It appears snow remains in the couloir until mid-summer, but perhaps spring is the best time to climb it when the snow is deep and firm, and the brushy, rocky approach is still under snow. It has been climbed and skied before, but I'm guessing receives very little traffic.
You can begin your ascent from directly below the top, but since the approach is from the east, it's more fun and more direct to start traversing over to the couloir a little earlier. There are some interesting ribs and rocks to weave around here.
Once in the main chute, stay closer to one side to avoid falling rocks. About halfway up there is an unusually large and level rest stop with an overhanging section of rock that is a nice place to catch a bite to eat and the view.
Beyond this point, the couloir continues to narrow until the very last section which widens and steepens somewhat, finally terminating at the gentle south slopes. The summit is about a half hour walk and another couple hundred feet higher.

Most will be able to climb this route with just a mountain axe and crampons. A lightweight short rope and a few pickets would be adequate for protection against a hazardous fall at the exit.