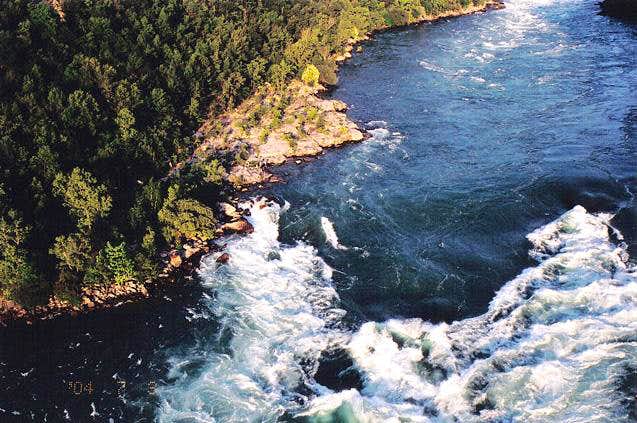 Niagara is the most accessible and well known of the world's largest waterfalls. The seven mile Niagara gorge is the site of giagantic class five and six rapids. This section of the "St. Lawrence" between Lakes Ontario and Erie makes up in drama what it lacks in length. Recall that the St. Lawrence is the third largest river in North America being only exceeded in in CFS by the MacKenzie and Mississippi. The river has cut the gorge into the Niagara Escarpment over the past 12,000 years. The escarpement rises several miles south of the shore of Lake Ontario and creates the falls. The American falls drape the walls of the gorge while the Horseshoe falls continue to cut into the bed rock. The first travelog of the falls was written by Father Hennepin back in 1683. Oddly enough Niagara and Lake Erie were "discovered" by Europeans after Lakes Ontario Huron, Michigan and Superior. Etienne (Steve) Brule and his associates discovered these lakes by 1615-1620 but since they canoed the Ottawa River, they missed Niagara and Lake Erie.

The California group is to be commended for including details about vintners. The Niagara peninsula now affords the traveler the luxury of touring various well known cellars. Only Vinafera grapes are permitted to be used in the vineyards-so this area has upscale production-none of the concord grape and MD 20/20 stuff is permitted under Ontario proviincial law. We enjoyed the tour of Cave Spring Cellars.

From New York City take I-90, the New York Through-Way to Buffalo N.Y.
and travel north to the towns of Niagara Falls Canada and New York.
From the mid-west, drive up I-71 to I-90 near Cleveland Ohio and then proceed through Erie Pennsylvania to Buffalo.

You may need to cross the border and that can be a slow process. The Rainbow Bridge next to the American Falls is considered the most convenient for car traffic. Sometimes there are delays due to increased security efforts.

This area is in the snow belt and is probably quite icy in winter.

Bouldering is available on the Canadian side in the Niagara Glen.
Follow the QEW (Canada)to the 405. Take the pentultimate exit before the Queenston/Lewiston bridge to the Niagara Parkway and turn right (south). The Niagara Glen is about three miles away from the bridge, on the left, look for the large parking lot.
What there is
An extensive collection of boulders provide a variety of climbs of all grades up to V11