There is no simple way to climb Eagle Nest. Although the mountain has a flat top, that top is guarded by extremely steep cliffs on all sides, and the rock is treacherous or the approach is insanely long and difficult (due to miles of off-trail travel and bushwhacking).

A look at this mountain on a topo map or from Flora Lake will confirm that it will not yield its secrets easily. On the map, the contour lines are very close together, so close that they sometimes touch; in person, the mountain will challenge experienced route-finders to plan a sensible way up.

I attempted the mountain via its north ridge, but the eastern face of the mountain seemed to be easier going. However, accessing the reasonable-looking parts of that face would have required one of the following: traversing loose, extremely steep rock from Flora Lake; or incurring significant elevation loss by following the very steep drainage south of the lake to friendlier terrain, then bushwhacking back up to the more accommodating portions of the east face.

Parts of the southern and western faces of the mountain look, ON THE MAP, slightly easier to climb, but getting to them would involve incredibly long approaches via rugged, heavily timbered, and trailless country. There is a drainage on the mountain’s north face that might offer a decent way up (visible in the primary image photo), but reaching it would involve traversing across loose, nearly vertical “slopes,” and there’s no guarantee the drainage would even be passable.

So the north ridge, while hardly an ideal route, might be best way to attempt Eagle Nest.

U.S. 14/16/20 connects Cody and the East Entrance of Yellowstone National Park. Theodore Roosevelt once characterized the stretch between Wapiti Valley and Yellowstone as being the 50 most beautiful miles in America. I can think of a few roads I think are more scenic, but this trip paralleling the North Fork of the Shoshone River is still no slouch. Between Wayfarers Chapel and Chimney Rock (getting the USFS map for the north half of Shoshone National Forest would be a good idea), look for an unpaved road heading south. It crosses the river almost immediately, and almost immediately after that there is a fork. FR 446, the left fork, leads about two miles to a scout camp. The other fork, FR 448, is the one to take. This road, passable to passenger vehicles, continues south for a few miles until it reaches a gate and a tiny parking area (room for maybe three or four cars) just where the road turns right to enter a subdivision. This parking area is the trailhead for Forest Trail 757, which follows Kitty Creek and later Neva Creek through Paradise Valley and ultimately to Flora Lake.

NOTE: When I was there in 2001, there were no signs directing people to the trailhead or informing them they were there once they were. Also, the location of the trailhead didn’t fit with the directions in the Falcon Guide I had with me at the time. It was a local resident who confirmed that I was at the trailhead, and it seemed that the trailhead had been relocated a mile or two north from where it had been before. This made what the book described as a 6-mile hike to Flora Lake more like 8 miles. Fortunately, my wife and I were there to backpack, anyway, but this is useful information for anyone wanting to try Eagle Nest as a day trip, which I do not recommend.

For five or six miles, the trail is pretty uneventful and mostly passes through a dense lodgepole pine forest, but there are occasional views of nearby mountains, and the stream is often close by. The trail is moderate in grade and shouldn’t have you worn out by the time you reach its end, not if you’re in decent shape, anyway. When the trail reaches Paradise Valley, things open up, and you find yourself strolling through the kind of subalpine, flower-filled meadows common in the Wyoming Absarokas. You’re not above treeline here or anywhere else along the trail, but the valley is wide enough, and the rolling mountains flanking it high enough, to lend an alpine feel to the setting.

Finally, after going back into the trees for a bit, the trail opens up for good and reaches tiny Flora Lake, across which you can throw a rock. Flora Lake is less a tarn and more a water-filled depression in a grassy meadow. But it makes a nice destination for a few reasons: it sees little traffic and is in the heart of some real wilderness; gentle ridges (Eagle Nest’s being exceptions) beckon hikers to enjoy some solitary, unforgettable views of some of the wildest country in the U.S.; it is itself in a scenic, relaxing area that makes a wonderful antidote to everyday life; and, even if you have no intention of straying from the trail, you can hike to the top of the rise just a few feet south of the lake and enjoy a view deep into the wild, rugged mountains from Pinnacle Mountain to Glacier Basin, areas that have no trails and see almost no human traffic--what wonders await the bold and the prepared out there may defy imagination.

Things look pretty simple at first. At or near Flora Lake (9800'), look west to the 10,207’ saddle connecting Eagle Nest to UN 10,425. Find what looks to be the easiest way up there; this involves easy Class 2 hiking and some minor bushwhacking through a small stand of trees. Only about 600’ left to climb!

Unaware of the nasty little surprise awaiting you, start hiking south along the ridge. You’ll find moderately steep Class 2 hiking until you get close to the end of what you could see from the saddle, where things quickly turn to Class 3. When you can no longer see the saddle because of the crumbling pinnacles and outcrops you have passed, things get harder, and some of the moves required are Class 4/low Class 5. Most of the time, though, there isn’t too much exposure.

About halfway between the saddle and the north face of the mountain, you will encounter the crux pitch that turned me back: a knife edge that will redefine the term for many people who see it. It resembled the lower jaw of something like a great white shark. If you had the perfect balance and unbelievable nerve of a tightrope walker, you MIGHT be able to walk across this knife edge (if it were solid). Much of it, though, is as narrow as or narrower than the width of a large hiking boot.

Beyond the knife edge is the north face, very steep but definitely climbable. Getting there is the trick.

I turned back at the knife edge for a few reasons: my wife was back at the saddle, and this knife edge, if even passable, was going to make my climb take far longer than I’d told her to expect; the knife edge got worse (narrower, sharper) as it got closer to the north face; I felt it was beyond my abilities as they were at the time; and there seemed to be no way of bypassing it by dropping to lower terrain, traversing, and then regaining the end of the ridge (it was just too steep and exposed on both sides for that).

I did negotiate the first of the “teeth,” and, atop it, I contemplated proceeding. But the considerations listed above, plus the pieces of rock that kept breaking off in my hands, convinced me to go back and live to climb another day.

To be honest, I don’t know if I’d climb that ridge even now, despite having much more experience under my belt. The condition of the rock probably makes it more dangerous to use rope than not to use it. That poor rock also discourages traversing the knife edge the way many traverse Capitol Peak’s knife edge (in the Elk Range, Colorado)--- by holding onto the crest while clambering along just below it. The safest way to cross the knife edge would probably be via straddling it or crawling across it, and that could take a long time while leaving one badly exposed to weather without any kind of escape.

Still, the mountain lurks in my memory as one of the few that ever got away, and time may find me back there someday. And if you do climb it--- what a mountain and what an adventure! Because the peak is virtually unknown, you won’t get many accolades for climbing it, but the satisfaction you take home with you will surely be immense. 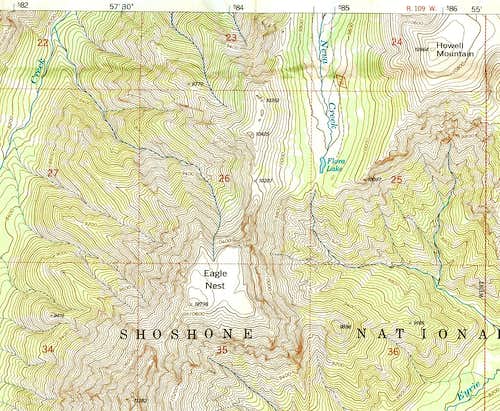 You will want sturdy boots with plenty of grip. You will also want steady nerves. Rope and other protective equipment may be useless and actually dangerous on this route, but you make the call.