Most people probably think of Medicine Bow Peak as just the highpoint of the Snowy Range, but some climbers know that it also sports several rock faces and couloirs that provide some great easy-access mountaineering and technical rock climbing in an alpine setting.

Old Main is the first (most northerly) of a series of rock faces south of Medicine Bow Peak’s summit. The Diamond is perhaps the most spectacular and the best-known, but Old Main is the highest and the largest. It is Point 11,755 on the USGS Medicine Bow Peak quad, and it rises due west of Lookout Lake for almost a thousand feet, creating a spectacular backdrop for that pretty alpine jewel.

The “peak” is, like most of the Snowy Range, comprised of quartzite, which is mostly nice and solid here but occasionally loose. Although the great face of Old Main must hold great appeal to technical climbers, the page for it on rockclimbing.com notes that routes on the peak are not well-documented and includes an entry for only one route-- 5.8 Left Ridge Route, first climbed in 1962.

Aside from taking on the face, there are three ways to get to the summit of Old Main:

The first is to scramble up, and that is best done from the right (north) side of the face. The route I used was Class 3 with a touch of Class 4 here and there. The more I moved toward that big east face, the tougher (and more enjoyable) the climbing became. I also noticed, close to the edge of the east face, a gully/chimney-type route that was definitely somewhere from Class 4 to low 5. It looked fun, and I almost wished I’d spotted it from below.

The second is to climb one of the couloirs adjacent to Old Main and then hike over to the highpoint. The first couloir north of the face seems to be the easiest, but it is harder than it looks, with moderate to steep snow that, when packed hard (as it was in July 2010), is difficult even if you are wearing crampons (I used the couloir as a descent route and spent much of the time on the talus beside the snow, for the snow was too hard and the slope too steep to glissade safely for very long). The next couloir over is much narrower and steeper, and I took a fall there that resulted in a nasty gash on my elbow. I was properly equipped and aware of the conditions and experienced climbing the snow out here, and it was a reminder that accidents can happen to anyone. There is also a narrow couloir just left of the face, and my original plan was to use it for my descent, but the steepness and the snow conditions changed my mind once I had a look down it.

The third is to leave the Medicine Bow Trail while going to or from the summit of Medicine Bow Peak and walk over for 20-30 yards to peer down the sheer cliffs and steep couloirs. 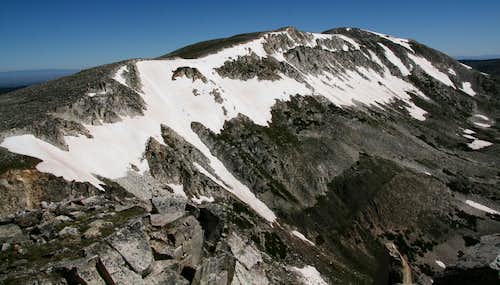 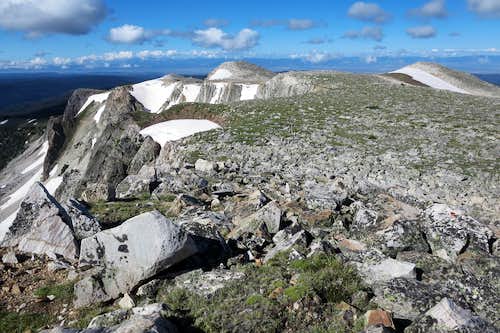 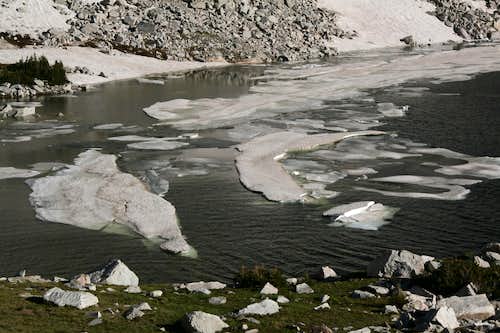 On WY 130, park at the Mirror Lake Picnic Area and pick up the Lakes Trail. This is about 28 miles east from the intersection of WY 130 and 230 south of Saratoga, and it is about 13 miles west of Centennial.

If the picnic area is closed, and I have seen it so several times, park a very short distance west at Lake Marie East Trailhead.

There are other places from which to approach Old Main, but those described here are the closest.

My total distance to the summit was 2.5 miles. Starting elevation was about 10,550’, making an elevation gain of approximately 1200’; around 800’ of that was during the mile to the summit after leaving the trail and contouring above and around the north side of Lookout Lake.

The easiest, but longest, descent route is via the Medicine Bow Trail, which leads to the Lake Marie West Trailhead, a short and easy hike from Mirror Lake. As I noted before, I scrambled up and took a couloir down, but that was also because I had another climb on the agenda-- the Diamond. 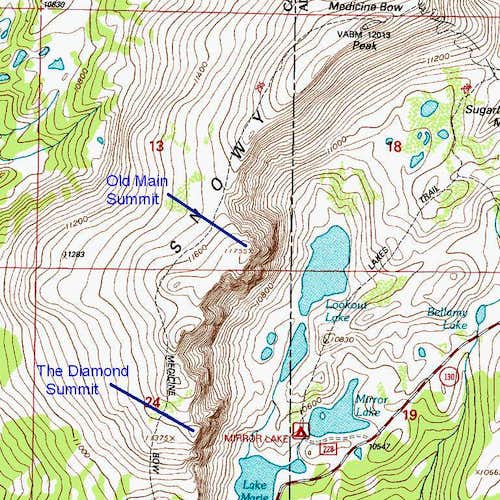 There was no fee at the Mirror Lake area in 2010, but there is a day-use fee at the nearby Sugarloaf area. Because this is a very popular area, I wouldn’t be shocked to see fees appear elsewhere.

The Forest Service wants people to stay on the trails in order to minimize impact on the alpine vegetation. Since climbing Old Main obviously involves off-trail travel, please make a great effort to stay on rocks and snow as much as possible and be as gentle as possible on the vegetation when you can’t.

Old maps, including the Medicine Bow Peak USGS quad, show campgrounds at Lake Marie and Mirror Lake, but there aren’t any there now. There are several national forest campground along or shortly off WY 130, though. The closest is Sugarloaf, a few miles east. The spur road to Sugarloaf is often blocked by snow into August, and the campground is closed when that is the case. You can reserve sites there at recreation.gov.