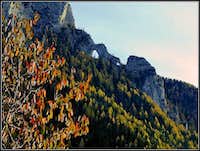 This is in my view the most beautiful route on the main summit of Olševa, coming up from the NW side. Before reaching the main summit we visit both well known landmarks. Felsentore / Vrata and Potočka zijalka. Then in the upper part we have two options, as described by the SW route description: The direct one crosses the slopes towards the highest summit, the ridge variant visits first the summit of Obel kamen and then follows the main ridge (or goes just below it). It is some 30 minutes longer and for ordinary hikers a bit harder. In summer you need of  gear only good shoes and poles.

Times and difficulties of sections:


The Route Description chapter below handles route sections 4 and 1c to 1f. Please enlarge the map to see them in detail!

See the parent page how to get by car to St. Margarethen / Sv. Margareta church, 925 m. You drive there from the west, from Eisenkappel / Železna Kapla.

On the other side we turn right. Now the marked path crosses beech woods far to the right (SE). After reaching the rocks of the side ridge, the path starts ascending up, bringing us to the crossroads. The left path climbs over steep rocks (secured by pegs, hooks and steel cables) through the arches, the right one simply continues ascending through the woods. Above, both paths join again, ascend a little more to the main ridge (still woods), cross the border and in few minutes reaches the cave of Potočka Zijalka. So, the left path is the more interesting one. The passage through the lower rock window is secured, steep, but still not too exposed or hard (T3). Above, the path goes in a few turns up and soon reaches the upper, big window (Grosses Felsentor / Velika Skalna Vrata). That's a beautiful place, very worth visiting! The third, smaller window lies a bit away. Now from the big window the path crosses the steep slopes ( a bit exposed) and then soon joins the direct path which simply ascends by the valley up. So, above we cross the border and reach Potočka zijalka.

From Potočka zijalka on, the ascent is identical with the one, described as the SW route.

After seeing the cave, we continue eastwards and up. The first rocks are steep, so the path overcomes them by a bit more narrow passage, which is secured by a steel rope (T3). Above the passage the path continues again more comfortably - at first in a few turns up, then towards the right, passing a distinct rock tower. So we reach a grassy and rocky side rib in the slope, where there is another crossroads. The direct variant goes around the edge, crossing the slopes, while the ascent on Obel kamen goes steeply left up.

a. Direct variant. The path comfortably crosses the grassy slopes towards the east. In the continuation you will gain only a little altitude, because a long crossing awaits you. Above and below the path you will enjoy in the views on interesting limestone walls and towers. The last ones above us, before gaining the main ridge, are called Visoka peč, and are most picturesque. After passing them, the path does a few turns up and gains the main ridge on a notch, where from the other side the path through Mrzli dol. On the ridge we turn right and continue more or less comfortably on the main summit.

b. Over Obel kamen. This variant is some 30 min longer. On the rib above Potočka zijalka the path deters sharp left up. It is narrow and at first goes quite steeply up. In many turns we avoid some rocky sections, above them broader, but still steep grassy slopes bring us on the main ridge. One side summit is towards the left, the main summit of Obel kamen is towards the right (good 15 min from the crossroads). In continuation we go towards the east in the vicinity of the main ridge. The path crosses a few ridge bumps and is on many places steep, requiring a safe step. Still, no passage has difficulties higher than T3. But before reaching the rocks of Visoka peč, the path must avoid its rocks by the southern side. There we first descend right down - that passage is a bit exposed and requires on some places to grab the lose rock, taking care of a safe step. That's a short T4 difficulty, which soon turns into a normal descent by a narrow path. It goes just below the cliffs of Visoka peč. After passing them we are already on the broader direct path by which we gain the main ridge and the main summit.

Descent. We can return via the route by Potočka zijalka, if keen, doing above a small round tour. The other option is much faster. We return by the main ridge only till the rocks of Visoka peč. There we turn right - down towards the north (no marks). Above we best use a pathless long scree, which descends some hundred meters west of the main peak to the northern side (also suitable for skiing!). It is called Mrzli dol. At it's bottom we reach a nonmarked path, which we follow towards the west, crossing the border (no one will be there, believe me, especially since we joined EU) and then descending the Remšenik valley to our car by St. Margarethen Sv. Margareta church.