On The Rock Again
England, Europe

On The Rock Again 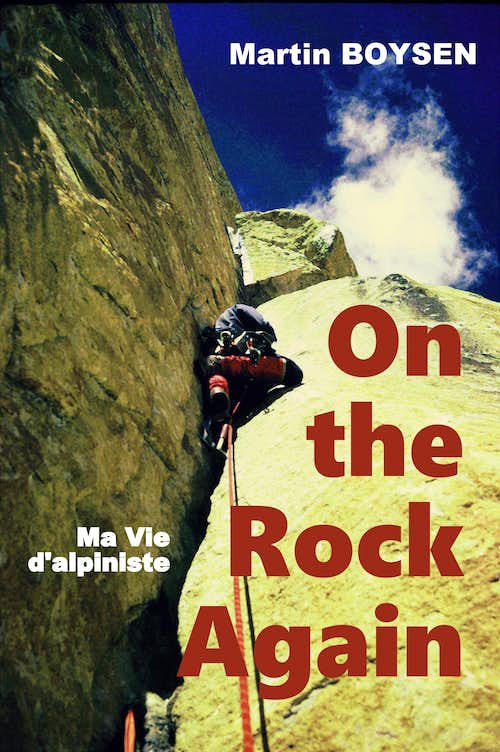 325 pages Translated in French, edited and published by Eric Vola on Lulu.com and Amazon as a print on demand paper book and E-Book.
Amazon Paper Book and E-Book

A few weeks ago I caught an episode of The Edge; the Triple Echo BBC seriespresented by Cameron McNeish which charted the history of Scottish climbing. In‘Doctor Tom’- a potted biography of the legendary Tom Patey- Chris Boningtonand Martin Boysen strode purposely through a fine Scotch mist en-route to climbthe Cioch Nose. A route established by Bonington and Patey in 1960.

In a way the two veterans could be seen as the Yin and Yang of UK Climbing.Chris Bonington, the ebullient showman and PR master who had established himself as the country’s most famous mountaineer by a mile, and MartinBoysen; a climber has always preferred to let his achievements speak forthemselves and who, like his friend Joe Brown, is someone who has most definitelyticked the ‘No Publicity’ box on the coupon. 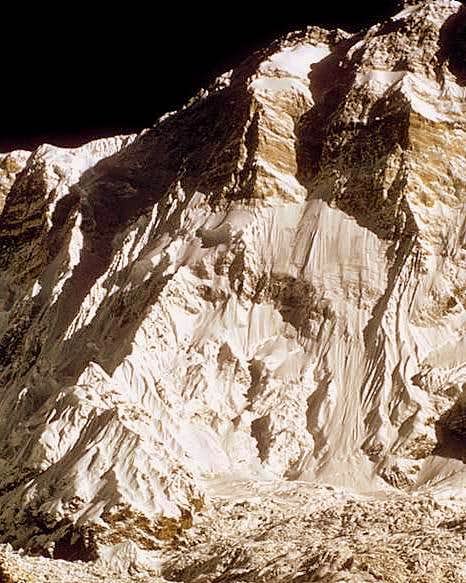 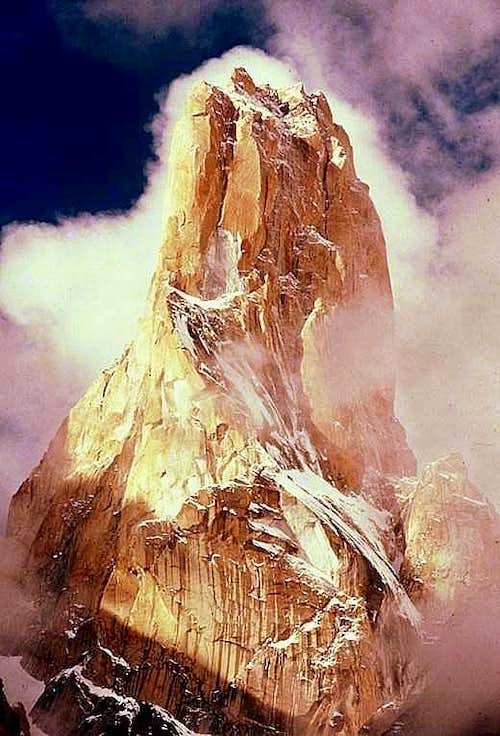 Now....finally, the enigmatic Mr Boysen has stepped out of the shadows with his long awaited biography-thirty years in the making- and the big question is...has it been worth the wait? As far as I am concerned the answer has to be a resounding YES!

As someone who started climbing in the late 80’s, Martin Boysen was one of those names which kept cropping up when I flicked through the back of a North Wales guidebook or caught an old climbing film like the 1970 Annapurna documentary which was shown on TV. Here was someone who wasn’t ‘box office’when it came to gracing the front cover of magazines or - apart from a rareappearance in the afore mentioned episode of The Edge - an instantly recognizable mountaineering media personality. Although he was not averse the doing the odd lecture circuit, his life and times were more the stuff of legend and mystery for people like myself and it’s this air of mystery which makes Hanging On such a great read.

My earliest memories are the wailing of air raid sirens followed by the droning of Lancaster bombers and the distant thump ofhigh explosives: And with those opening words, Hanging On sets the scene. You'll note it is British Lancaster bombers who are dropping  bombs on the surroundingtowns, not German Heinkels. You see, Martin Boysen –son of a German father and English mother-found himself in his early years, stranded in the German mining town of Alsdorf. With his father reluctantly fighting for Hitler on the Eastern Front, Martin found himself hunkered down with his mother and sister Lorna, amidst the devastation and carnage in a battered corner of the country. As the war ended and with the advancing Allied forces liberating the town, tragedy struck when eight year old Lorna was accidentally shot through the head and killed by an English Tommy. 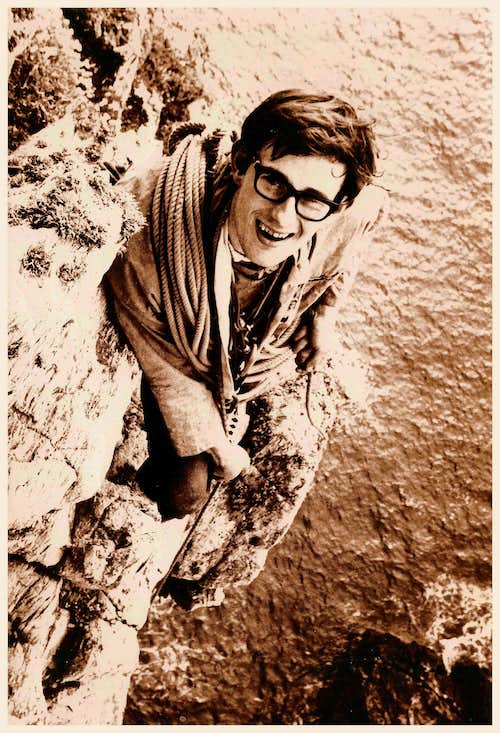 Not surprisingly, with Boysen senior presumed dead (He wasn't), the family returned to Kent where Martin's mother's family hailed from. Driving back afterthe war, Martin recounts in an interview, passing through Ardennes; a landscape of burnt out tanks and military vehicles which littered the road amid the rubble and pulverized shells of towns and villages battered beyond recognition.

Back in the leafy bounds of rural Kent, the first stirrings of outdoor interest manifested itself in a love of bird watching. An interest which began to take him to other parts of the country. Not least the majestic heights of the Cairngorms where while staying in a youth hostel he first came across rock climbing as an activity as he was idly leafing through a magazine. Discovering that the sandstone outcrops close to home at Harrisons and Bowles rocks were rock climbing venues, the teenage Boysen took to lurking with intent. Hoping that an experienced crag rat would take pity on the wide eyed youngster and let him follow them up one of the trade routes. Not surprisingly,he had soon blazed his way through all the hardest routes hereabouts and begun to establish regular partnerships and contacts in the local climbing scene.

Like so many of his provincial climbing contemporaries, he soon began to hanker after bigger and better things than these wee sandstone climbs and quickly gravitated towards Wales, the Peaks and The Lake District where - inWales in particular - he began to repeat the hardest routes of the day and wassoon putting up state of the art routes of his own. Throughout the sixties and with minimal gear - this was still an era of placing pebbles in cracks and using dubious and heavy ex MOD gear - Martin practiced the ‘Ground Up’ approach to new routing which perhaps reached its sixties zenith with the discovery and first ascents at Gogarth. The huge sea cliffs at Holyhead Island off the North Walescoast.

As with most leading climbers of the era, the challenges of The Alps and Greater Ranges beckoned and throughout the seventies and eighties, Martinestablished himself as a consistent and reliable performer at altitude. His reputation established him as an in demand team member when people like Bonington were putting together teams to tackle new routes in the Himalayas and Patagonia. Challenges which were more often than not thwarted by adverse conditions and occasionally tinged with tragedy. Such as the successful previously mentioned Bonington led Annapurna campaign which saw Ian Clough killed on the descent. 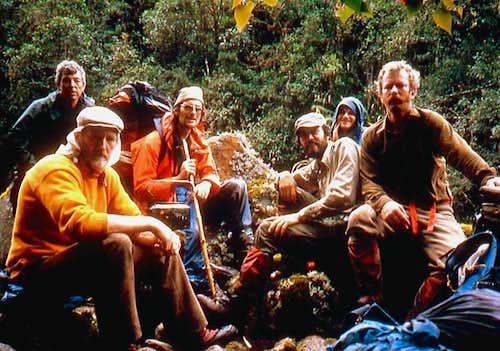 The backdrop to Martin’s meteoric ascent across the climbing firmament is counterpointed by his day to day bread and butter life as a science teacher in Cheshire. This was an era of course when nearly all climbers had careers or were on the dole. The Professional climbers like Chris Bonington were still rare creatures and even legends like Joe Brown and Don Whillans were only now finding opportunities outside of their building and plumbing backgrounds to eke out an existence though lecturing or in Joe Brown’s case, by opening a climbing shop. For Martin Boysen, the mountaineering life had to be balanced with his teaching career. A career which he acknowledges was not always a happy and contented vocation. It was during this period that he and his new wife Maggie were involved in a serious accident which almost took their lives. While driving home from seeing Don Whillans and sitting in the back of Mike Yates’s VW Beetle, they were hit side on by a police car. A accident which left both Martin and Maggie with serious injuries. Thankfully, after months of operations and physio, both eventually returned to fitness although their physical recovery was somewhat marred by bad feeling resulting from their insurance compensation claim against the driver.

After making a full recovery from the accident, Martin returned with new enthusiasm to the greater ranges. Tackling routes on Changabang and The Trango Tower amongst others and joining Hamish MacInnes on a Treasure Hunt to Ecuador with Joe Brown and Mo Anthoine in tow. It was with these afore mentioned climbers - later to be known as ‘The Mafia’ – that he found himself doubling for French actor Lambert Wilson in the Fred Zimmerman film Five Days one Summer. A nice little earner which as it turned out, partly funded Martin’s swan song Greater Ranges jaunt; a trip to climb Latok. In the event, the expedition was a failure and it convinced the author - now with a young daughter Kate - to rein in his activities. He had seen and experienced enough tragedy by now and had been blessed with good fortune considering he had been operating at a high standard in an environment which had taken so many of his friends 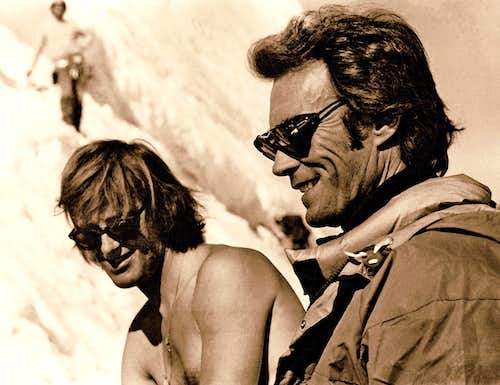 Stand-in for Clint Eastwood - The Sanction

Haston, Boardman,Tasker, Escourt, Clough, Burke et al, all close comrades who had 'bought the farm' and exited the scene prematurely. Now was the time to return to his roots and tailor his climbing activities to the more mundane hills of home and the pure climbing crags around the world where he could enjoy climbing for pure pleasure with friends and family.

With close friend Rab Carrington packing in at the same time to concentrateon building his eponymous mountainwear brand- he returned from whence he cameand with Rab, began to rediscover the delights of Wales and all points Northwhile regularly flying out to explore the great faces of California, Australiaand Europe. Now in his early seventies and after once again cheating death-this time after being stricken by a serious autoimmune illness- Martin Boysenstill displays the same enthusiasm for moving over rock that he firstexperienced nearly sixty years ago as he took his first tentative steps onKentish sandstone.

Hanging On has been short listedfor the 2014 Boardman-Tasker prize. If I was a gambling man I’d put my house onit taking the ultimate prize. An excellent and considered work by a thoughtfuland modest man. 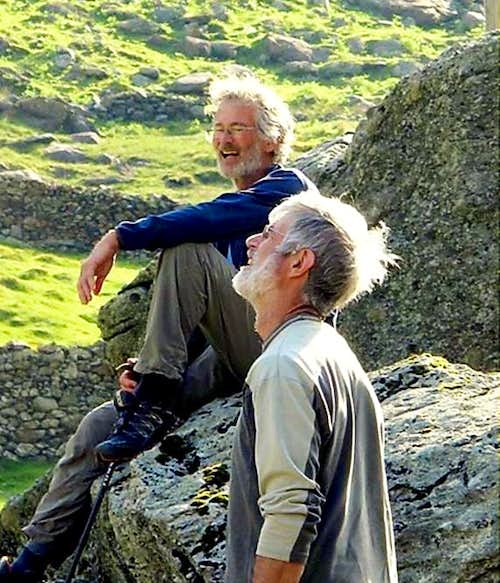 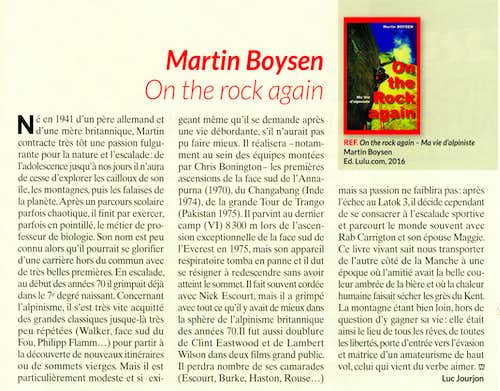 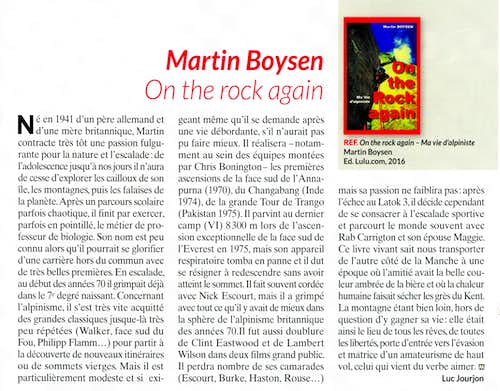 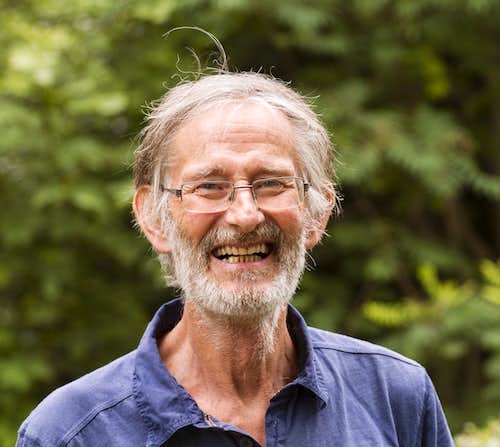